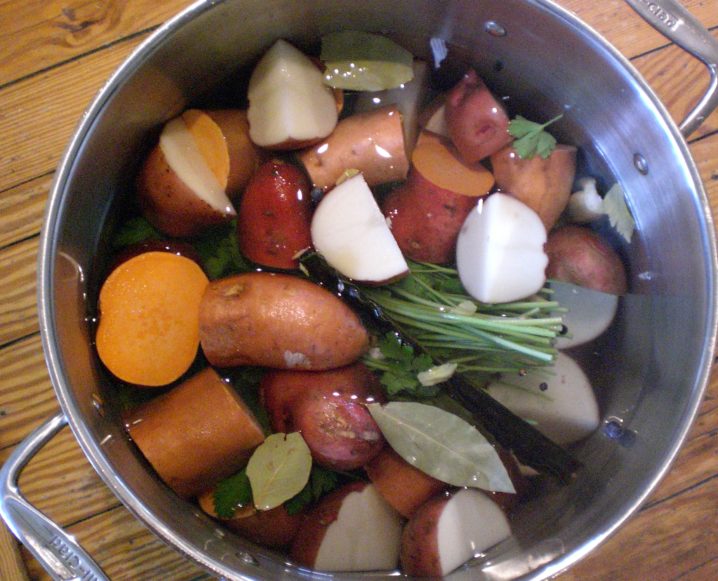 When a family member recently fought – and won – her battle with a life-threatening disease, it was a pot of this immunity-boosting broth that could always be found steaming away on the stove. More like an elixir – this simple, traditional veggie stock from The Cancer-Fighting Kitchen

is full of immune system supporting and super-hydrating minerals. Perfect for the ailing patient or the cold and flu prone household, make free-flowing mugs of this broth a part of your yearly cold weather-busting arsenal.

Author Rebecca Katz on the Magic Mineral Broth’s popularity: It took 65 gallons, scores of attempts and a full rotation of the earth around the sun before I came up with what I eventually called ‘Magic Mineral Broth’ for my last book The Cancer-Fighting Kitchen

. The inspiration was practically in my genes: I’d been raised on Jewish Penicillin—a.k.a. chicken soup—and wanted to create a delicious, nutrient dense veggie broth with amazing health properties. After experimenting like a mad scientist for a year, Magic Mineral Broth came to be.

To my delight, it became not only my ‘go-to’ broth, but that of thousands of readers, friends and colleagues. The recipe became the surprise hit of the book and I am continually delighted to hear from readers like one recent mom who swore that it was ‘MMB’ that got her teen son back on the basketball court after a bout of Mononucleosis.

and acts like an internal spa treatment. I’ve brought numerous herbs and spices renowned for their longevity properties to the table, notably thyme and garlic. As a dazzling hydrating broth or tea this really is an elixir of life! I’m living proof that even in the kitchen, older is wiser; it only took me 25 quarts and two months to get this broth to hit my Hallelujah button.