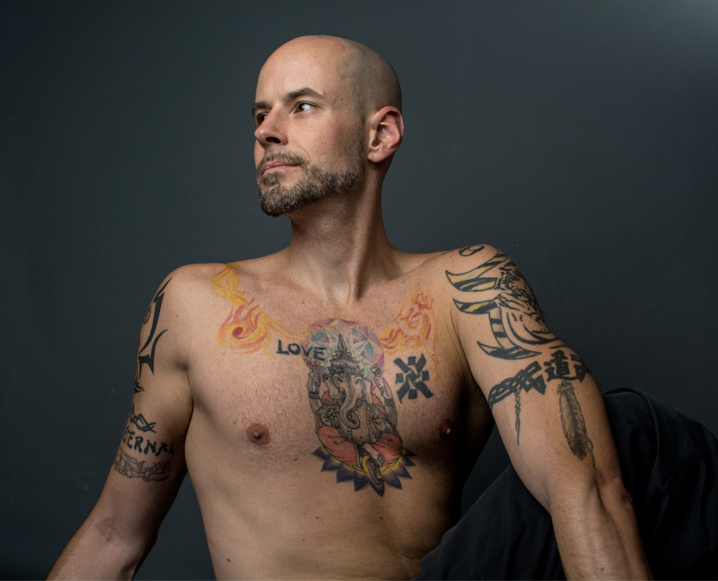 Derek Beres is not one to be put into a box. This multi-faceted yoga teacher-DJ-music producer-author is passionate about fusing his love for yoga, music, neuroscience, and global culture into innovative new platforms to help us become more informed – and more understanding. As one half of global music producers EarthRise SoundSystem, Derek is helping to fuse cultural divides and redefine what the world music genre can sound like in a contemporary contect. Basically, if the idea of “yoga music” makes you slightly cringe, you haven’t experienced Derek, EarthRise SoundSystem – or his newest creation, Flow Play.

Flow Play is not your mama’s Vinyasa: this class, now offered at Equinox Fitness locations nationwide, helps exercise both your mind and bod by weaving together a soundtrack that encourages you to literally move to the music. It’s no surprise that musically inclined fitness is on the rise; there’s a whole science behind music that we rarely even think about.  Music affects your heart rate, mood, and concentration – and Derek (along with Grammy-nominated musician and producer Philip Steir) has harnessed that exact power to help you feel deeper, flow freer, and break down barriers with each down-dog.

As if that wasn’t enough, Derek has now taken the mind-body connection one step further with his sixth book, The Warrior’s Path: Living Yoga’s Ten Codes

, exploring the roots of yoga and how they apply to the yoga world today. Think a modern-day-yogi mash-up of well-researched neuroscience, evolutionary biology, and moral and developmental psychology that can truly take your practice to a whole other level. Oh, and did we mention he trains future yoga teachers on both coasts? And we thought our schedules were busy…

Get to know this music-minded yoga teacher – his surprisingly simple source of inspiration, the pragmatic lesson he’s most passionate about teaching, what Americanos mean to him – and let his sound advice rock your asana:

What originally drew me to yoga:

I have a degree in Religion from Rutgers University, where I focused on Eastern texts. After college, I was practicing dance and martial arts, and through an incredible class called Allan Wayne Work with Brendan McCall I realized how little I actually knew about my body. I shortly began practicing yoga asana with Brendan thereafter.

People who are willing to change their minds. Sounds simplistic, but given how powerful neural patterns are, I’ve witnessed many people unwilling to adjust their belief systems or point of view in the face of contradictory evidence. It takes great strength (and compassion) to say, ‘I was wrong, and now I’m going to adjust.’

I wish that more people realized that yoga...

…begins with the yamas and niyamas, the ethical and moral foundation of the practice. Traditionally, you would not begin asana and meditation unless you were a good person in your society. Today few yogis relate yoga to social justice and ethics, but they are the very roots of what we’re doing.

Project or cause I'm most passionate about:

Animal rights and veganism. Each year human beings kill between 58-80 billion animals a year for food. This comes at a time when animal cognition has been seriously studied, and we now know that all mammals experience the same range of emotions that we do. Yet we’ve cut off our species from the rest of existence to such a point that we rarely recognize suffering in other animals – we sometimes don’t even see it in our own culture and world. We forget that we’re animals too, and therefore we often act like the worst of the lot.

Biggest lesson yoga has taught me:

Never taken anything for granted, and never believe anything unless you experience it for yourself. That might sound like two lessons, but they are intimately related.

Biggest lesson I hope to teach through yoga:

There’s a wonderful Sanskrit word, viveka. It means “discrimination” and lies at the heart of yoga philosophy. I hear so many false claims about yoga that are perpetuated by word of mouth, people taking things at face value. Research what you’re being told – for example, yoga is not a 5,000 year-old practice, as often claimed – and adjust your ideas when it’s called for.

I get excited any time someone tells me after class that they had a personal revelation during the flow. I’ve had so many breakthroughs on my mat over the years, and I love that I can assist in that process for others.

Write until the day I die; listen to as many versions of Coltrane’s “Out of This World” as possible (though he lost me in Seattle); film the documentary of my first book, Global Beat Fusion

, which has been many years in the making; visit every coffee shop in Los Angeles in constant search of the best Americanos; travel to as many countries as I can during my time here.

Advice I would give my 16 year-old self:

Do exactly what you did. There’s no looking back, except when you need to remember that you’re moving forward.

“The best thing I can say is to follow your bliss. If your bliss is just your fun and your excitement, you’re on the wrong track. I mean, you need instruction. Know where your bliss is. And that involves coming down to a deep place in yourself.” -Joseph Campbell