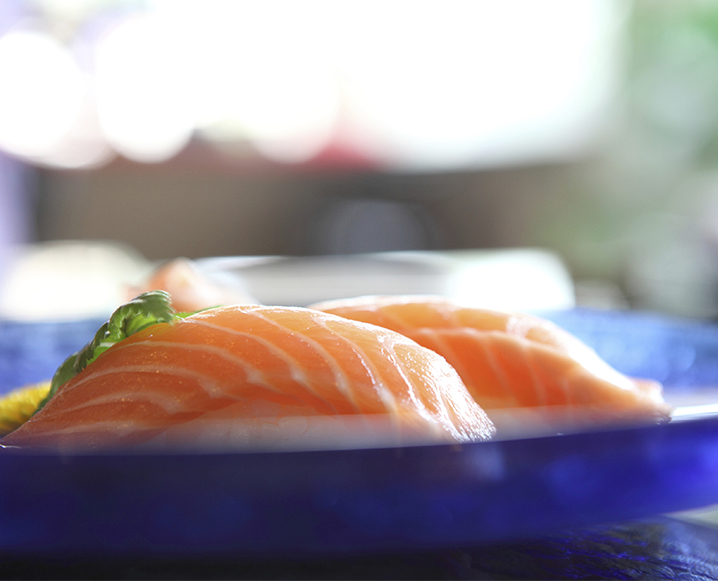 summertime is straight ahead, and short shorts and teeny bikinis are on our minds. That means cleaning up the diet with kale salads, Greens 1, fruit parfaits and sushi dinners. Sushi is one of those go-to dishes that is unbearably delicious while also diet-friendly…right? The funny thing is that sushi can go the full spectrum in terms of nutrition. It can either be a very healthy choice, or a very, very unhealthy one.

When we think of sushi, we imagine raw fish, a scant amount of white rice, and maybe a piece of avocado, all rolled up in a seaweed wrap. A perfect combination of protein, carbohydrate and fat. And that would be healthy if that was the whole story. The problem is that sushi should look like this, but often doesn’t. Instead, a piece of fry-oil drenched, crunchy tempura shrimp or mercury-laden tuna makes its way to the plate, along with some heavy duty “dynamite” sauce and now we have a plate full of unhealthy fats and heavy metal-filled protein. Just like all other traditional cuisines that make their way onto American plates, sushi is too often now fried, fat-filled and unhealthy. We’re looking for ways to revamp our sushi plate, sticking only to the cleanest, non-toxic menu choices. Take a look at our top swaps, so that every bite gets you one step closer to the summer-level health you’re looking for.

6 Healthy Sushi Swaps
Make these swaps to have the healthiest meal ever!

Because tuna (albacore, bluefin, ahi and yellowfin) is such a large fish, it has the highest concentrations of mercury and should often be avoided. Mercury negatively impacts the brain and nervous system. It can lead to impaired cognitive thinking, memory, and vision. Order salmon instead. Salmon is not only low in mercury, but also contains a high concentration of omega-3 fatty acids. These fats keep our heart and skin healthy while also lowering inflammation and improving mood. If possible, choose a restaurant that carries wild salmon not farm-raised. This is the cleanest source – free of GMOs, lower in toxins and higher in omega-3 fatty acids.

White rice is refined, having had the nutrient-dense husk, bran and germ removed. This leaves a nutritionally-poor carbohydrate that lacks the important minerals, vitamins and fiber that is found in brown rice. As a result, white rice has been shown to raise blood-sugar levels, putting one at risk for diabetes and weight gain. In addition, the white rice that is used in sushi often contains sugar as well, further causing stress to the body. So ask for brown rice instead. Brown rice contains tons of fiber, to help regulate blood sugar and weight, as well as vitamins such as vitamin E, which is a key antioxidant known to protect the heart and to prevent aging.

Tempura or “crunchy” are two names that simply mean fried. This means that the once healthy vegetable or piece of fish has had its nutrients damaged by the heat, and has had calorie-laden, cell-damaging fats added to it. Fried foods not only contribute to a larger waist line, but they also cause inflammation, aging, wrinkles and weak cells. Swap out fried rolls for the roll with raw fish, or the appetizer with steamed or sauteed vegetables instead.

Dynamite, “spicy,” or “special” sauce are all usually names for sauces that are made with mayonnaise. Sure they taste good, but they quickly turn your perfectly healthy sushi roll into a calorie bomb. Mayonnaise is not just high in calories though. It most always contains either soybean or canola oil. Both oils are often genetically-modified, which puts you at unnecessary risk for potential health effects such as cancer, allergies, liver damage and birth defects. These oils are also damaging to the cardiovascular system, increase inflammation and weaken the immune system. Opt for ponzu sauce instead, which is typically made of soy, rice vinegar, seaweed and citrus such as lemon.

Always choose the low-sodium soy sauce over the regular kind when you can. Just a dash of the regular soy sauce can have over 2000 mg of sodium. This is nearly one day’s worth of salt consumed in one sitting, which is way more than you need. Too much sodium can lead to bloating (water retention), kidney stress, high blood pressure, and an imbalance in your minerals. Over time mineral imbalance can cause a host of issues including fatigue, restlessness, irritability and poor recovery from workouts.

Cream cheese in Japanese cuisine? We have no idea how it made its way there, but somehow it did. Cream cheese can now be found in many rolls, including the popular Philadephia roll. Cream cheese not only adds extra calories to your meal, but it also contains hard-to-digest dairy sugars called lactose. Lactose can cause indigestion, bloating, constipation, acne and weight gain over time. In addition, most restaurants use conventional cream cheese. Non-organic cream cheese exposes you to antibiotics and hormones, which can cause hormone imbalance and resistance to antibiotic drugs. So switch to another condiment such as wasabi instead. If you can tolerate the heat, you can reap benefits from this hot green paste such as clearer sinuses and a ramped up metabolism.