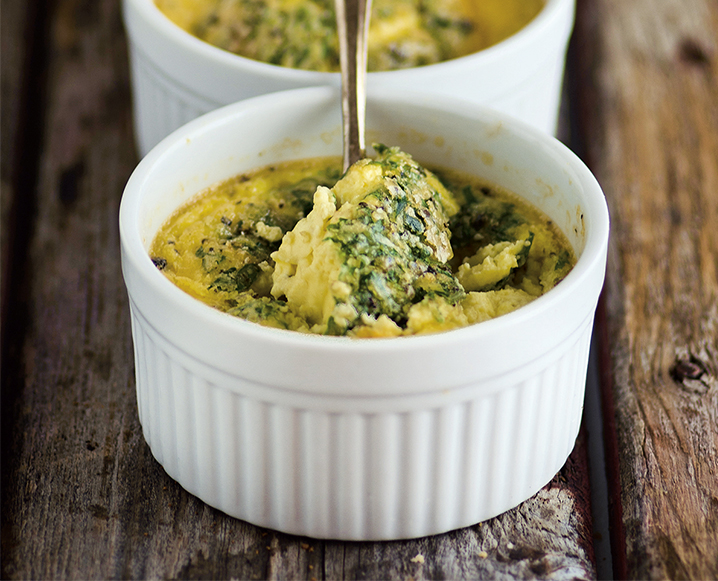 Primal-sounding Foods like bone marrow, bone stock, liver – basically anything beyond a burger – may sound a little crazy to most modern ears, but the truth is that traditional foods like this bone marrow custard have been around for a long time with good reason. Beyond its culinary appeal (we swear this hearty dish is on the menu of every trending chef in the nation,) bone marrow is a deeply nourishing food that fills the nutritional blanks in our modern diet like no other.

One of our favorite voices on the topic of traditional foods, Jennifer McGruther of The Nourished Kitchen, is laying out the nitty gritty on bone marrow below. From tasting notes to nutritional profile, get acquainted with this ancient superfood that will revitalize both your immune system and your dinner party plans!

Comprised mostly of fat, bone marrow tastes like browned butter – for this reason, you can often find it used for sweet custards and desserts in old cookbooks. Cream and eggs nicely complement roasted marrow in this simple savory custard, while the fresh flat-leaf parsley adds a clean, bright flavor to balance the richness. I often serve this custard for a late but substantial breakfast with sliced fruit, though it pairs nicely with a crisp green salad at lunchtime.

Long leg bones from beef steers provide delicious, buttery marrow. Purchase them pre-cut, or ask your butcher or rancher to cut them 1-inch to 4-inches thick to make scooping out the marrow a little more manageable. While you can remove the marrow from the center of a raw bone, roasting the bones significantly improves the flavor of marrow and makes it a bit easier to remove too.

In Praise of Bone Marrow

With a taste reminiscent of browned butter, bone marrow is a splendid, yet humble, addition to the plate.  While the idea of roasting bones, and spooning out the rich, and buttery marrow for use in soups and savory custards like this one may seem foreign to many home cooks, there’s a traditional wisdom to its use.

Bone marrow, well-loved in the dish Osso Bucco, enjoys a longstanding place in culinary traditions throughout the world, and its use hails from a time in which the hallmark of a good home cook was not only the quality and flavor of the food she prepared, but also her thrift within the kitchen.  Nothing went to waste, and nutrient-dense foods like bone marrow enjoyed a treasured place at the table.

While modern cooks and health enthusiasts often look to long-traveled and exotic fruits and seeds as super foods (consider acai, goji berries and chia seeds), it’s easy to forget that some of the most delicious, nutrient-dense foods can be found closer to home.  Bone marrow, rich in minerals and fat-soluble vitamins, represents a good example of a superfood that can be found in any good-quality butcher or purchased directly from ranchers.

Its rich content of dietary fat gives bone marrow its a luxuriant creaminess.  Bone marrow is a good source of monounsaturated fat in particular which is also the dominant fat found in olive oil and avocado, both of which are lauded for their health attributes.  Further, fat works synergistically with other nutrients like vitamins A, D, E and K as well as antioxidants, enabling them to be better absorbed by the body.  Bone marrow itself represents a good source of Vitamin K2.  Vitamin K2, a nutrient found in animal foods, supports bone, cardiovascular, skin and brain health.   Vitamin K1, by contrast, is a nutrient found predominately in leafy greens, doesn’t offer quite the same benefits as K2 and, instead, plays a role in blood clotting.

Bone Marrow is also a source of true, or preformed vitamin A, which supports vision health, especially as we age, as well as reproductive health.  Unlike the carotenes found in plant foods that must be converted by the body into vitamin A, bone marrow contains an active form of the vitamin.

While bone marrow itself is an extraordinarily nutrient-dense foods, and offers many benefits to the diet, its benefits extend beyond cold calculation of vitamin and mineral content to the benefit it offers the plate.  Marrow tastes delicate, creamy, with luscious notes of nuts and browned butter.  It is a superfood that can be found close to home, by simply asking your local butcher or rancher.  Further, marrow bones are typically inexpensive, by comparison to other cuts, and just a touch of roasted marrow goes a long way to bring a delicate richness to dinner.

Put the bones in a single layer in a roasting pan and roast for 30 minutes. Remove the pan from the oven and let the bones cool until they are comfortable to handle.

Decrease the oven temperature to 325°F and grease six 4-ounce or four 6-ounce ramekins with a bit of butter.

Extract the marrow from the bones with a spoon and drop it into a bowl, discarding the bones. Whisk the eggs and cream into the marrow, then pass the mixture through a fine-mesh sieve set over a bowl to remove any coagulated bits of marrow or lumps of egg. Whisk in the salt, pepper, and parsley.

Reprinted with permission from The Nourished Kitchen