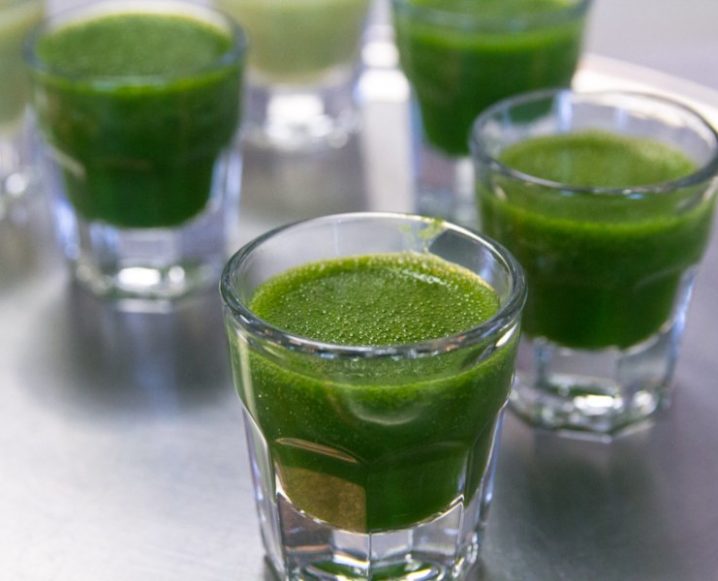 Wheatgrass is intense. And so is this list from Dr. Brian Clement of the Hippocrates Health Institute on fifty powerful reasons to begin drinking wheatgrass juice everyday!

Some proponents of wheatgrass claim that one shot of the juice has the nutritional value of up to 350 pounds of garden vegetables. Wheatgrass is highly alkalizing and purported to have an anti-bacterial effect, but that’s truly just the beginning of wheat grass’ near-miraculous benefits.

If you can’t handle wheatgrass juice fresh and raw (which really is best) you can also try wheatgrass as a powder or tablet (see our top picks below). Powdered wheatgrass is a bit more mellow in flavor and is far easier to keep on hand in the pantry.

Wheatgrass therapy is practiced by Dr. Clement in his goal to”assist people in taking responsibility for their lives and to help them achieve an existence free from premature aging, disease and needless pain.” If you’re looking for natural healing guidance, his programs are thorough, insightful and well-regarded in the world of health and wellness.

Check out our list of fifty reasons to drink wheatgrass daily, then check out the comments section below for plenty of additional insights from our readers…

01. Surprisingly, wheatgrass is extremely rich in protein, and contains 17 amino acids, the building blocks of protein.

02. Wheatgrass juice is one of the best sources of living chlorophyll available today. To get the full benefit, the chlorophyll must come fresh from a living plant.

03.Wheatgrass juice is an effective healer because it contains all minerals known to man, plus vitamins A, B Complex, C, E and K.

05. Chlorophyll is the first product of sunlight and, therefore, contains more ‘light energy’ than any other food element.Wheatgrass juice contains crude chlorophyll (as opposed to pure) and can be taken orally and as a colon implant without side effects. In addition, scientists have never found wheatgrass to be toxic in any amount when given to either animals or humans.

06. Science has proven that chlorophyll arrests growth and development of unfriendly bacteria.

07. Chlorophyll is antibacterial and can be used inside and outside the body as a natural healer. The United States Army exposed guinea pigs to lethal doses of radiation. The guinea pigs fed chlorophyll-rich vegetables such as cabbage and broccoli had half the mortality rate as those fed a non-chlorophyll diet.

08. Chlorophyll can be extracted from many plants, but wheatgrass is superior because it has been found to have over 100 elements needed by man. If grown in organic soil, it absorbs 92 of the known 115 minerals from the soil.

09. Wheatgrass juice contains up to 70% chlorophyll, which is an important blood builder. The chlorophyll molecules closely resemble that of the hemin molecule, the pigment which combines with protein to form hemoglobin. The major difference is the chlorophyll molecule contains magnesium as it’s central atom, and the hemin molecule contains iron. The molecular structure of these two substances is almost identical in all other respects.

10. Liquid chlorophyll has the ability to get into the tissue, where it can actually refine and renew them.

11. The bland soothing effect of chlorophyll (wheatgrass) ointments are very beneficial to the treatment of various skin diseases involving the outer and underlying layers of the skin, including: itching and burning of the rectum; ivy poisoning; weeping and dry eczema and even in conditions caused by insect bites or infection.

13. Doctors R. Redpath and J. C. Davis found chlorophyll packs inserted into the sinuses had a drying effect, clearing up congestion, and giving immediate relief. Congested head colds were cleared up within 24 hours.

14. Chlorophyll neutralizes toxins in the body.

15. Chlorophyll helps purify the liver. You can improve your liver health by focusing on herbs and foods like wheatgrass that are known to regenerate liver tissue, support its detoxification process of alcohol, and protect it from the damage induced by your favorite libations.

18. Dr. Birscher, a research scientist, called chlorophyll “concentrated sun power.” He said, “chlorophyll increases the function of the heart, affects the vascular system, the intestines, the uterus, and the lungs.”

19. Wheatgrass juice can dissolve the scars that are formed in the lungs from breathing acid gasses. The effect of carbon monoxide is minimized since chlorophyll increases hemoglobin production.

20. Wheatgrass is high in oxygen like all green plants that contain chlorophyll. This is beneficial because the brain and all body tissues function at an optimal level in a highly- oxygenated environment.

21. It is a nutritionally complete food which will sustain the growth and development of laboratory animals and humans alike. Wheatgrass has what is called the grass-juice factor, which has been shown to keep herbivorous animals alive practically indefinitely.

22. Wheatgrass juice is a superior detoxification agent compared to carrot juice and other fruits and vegetables.

23. The starch of the wheat berry is stored energy which when converted to simpler sugars is a quick energy source. It is especially good for athletes because it is a juice and is assimilated in 20 minutes or less, and uses very little of the body’s energy to extract the nutrients…

24. Because 1 ounce of juice equals 2 pounds of produce nutritionally, it naturally shuts off the appestat in the brain.

25. Wheatgrass contains a full spectrum of vitamins and minerals, including the thirteen essential ones, combined with dozens of trace elements and enzymes.

26. Wheatgrass juice is an effective healer because it contains all minerals known to man, and vitamins A, B-complex, C, E, l and K. It is extremely rich in protein, and contains 17 amino acids, the building blocks of protein.

27. Farmers in the Midwest who have sterile cows and bulls put them on wheatgrass to restore fertility. (The high magnesium content in chlorophyll builds enzymes that restore the sex hormones.)

28. Wheatgrass juice cures acne and even help to remove scars after it has been ingested for seven to eight months. The diet, of course, must be improved at the same time.

29. Wheatgrass juice acts as a detergent in the body and can be used as a body deodorant.

31. Wheatgrass juice held in the mouth for 5 minutes will help eliminate toothaches. It pulls poisons from the gums.

33. Drink wheatgrass juice for skin problems such as eczema or psoriasis.

34. Wheatgrass juice helps to keep the hair from graying.

35. Pyorrhea of the mouth: lay pulp of wheatgrass soaked in juice on diseased area in mouth or chew wheatgrass, spitting out the pulp.

37. Wheatgrass juice is an excellent skin cleanser and can be absorbed through the skin for nutrition. Pour green juice over your body in a tub of warm water and soak for 15 to 20 minutes. Rinse off with cold water.

38. Wheatgrass implants (enemas) are great for healing and detoxifying the colon walls. The implants also heal and cleanse the internal organs. After an enema is evacuated, implant 4 ounces of wheatgrass juice. Retain for 20 minutes.

40. For minor eye irritation apply strained wheatgrass juice mixed with half pure water in an eye cup for 15 – 30 seconds.

41. Massage 6 ounces into the scalp and cover with shower cap for 15 minutes to help eliminate dandruff.

42. Wheatgrass juice can be used as a douche for many feminine complications.

43. Wheatgrass juice is great for constipation and keeping the bowels open because it is high in magnesium.

45. Wheatgrass is gluten-free because it’s cut before the grain forms.

46. Wheatgrass juice can remove heavy metals from the body.

47. Wheatgrass juice is great for blood disorders of all kinds.

48. Another benefit of wheatgrass is you can grow it in just about a weeks, right in your own home.

49. Dr. Earp Thomas said, “Wheat is the king of all grain foods”. He found that an ounce of wheatgrass in a gallon of fluoridated water would turn the fluorine into harmless calcium-phosphate-fluoride compound. Used in wash water it adds softness to the face and hands. In the bath, it is most soothing. It stops bleeding, eases itching, and helps sores and pimples to heal. Dr. Thomas further discovered that fruits and vegetables contaminated by sprays were thoroughly cleaned and the negative food transformed by wash water with a wisp of wheatgrass placed in the water.

50. And finally – by taking wheatgrass juice, one may feel an increase in strength and endurance, renewed health and spirituality, and experience an overall sense of well-being.

How To Take Wheatgrass Daily

We know health nuts who take four shots of wheatgrass a day because they believe it supports their healing process, but, if you are new to wheatgrass, we recommend that you start with just half a shot a day. Drink plenty of water and pay attention to the way you feel.

Wheatgrass can upset the stomach if your body isn’t accustomed to a clean diet. Adjust your dosage of the juice over time as your body adjusts to it’s potency. We recommend dosing up by half a shot or ounce over a one week period. Many people settle on just one shot a day.

Try your first shot of wheatgrass on an empty stomach for maximum absorption and following it with a small apple juice chaser. Follow with plenty of water in the hours that follow.

Fresh wheatgrass is best, but green powders are also convenient, our top picks are listed here at every price point.