How Healthy Is Oat Milk? Here's What You Should Know 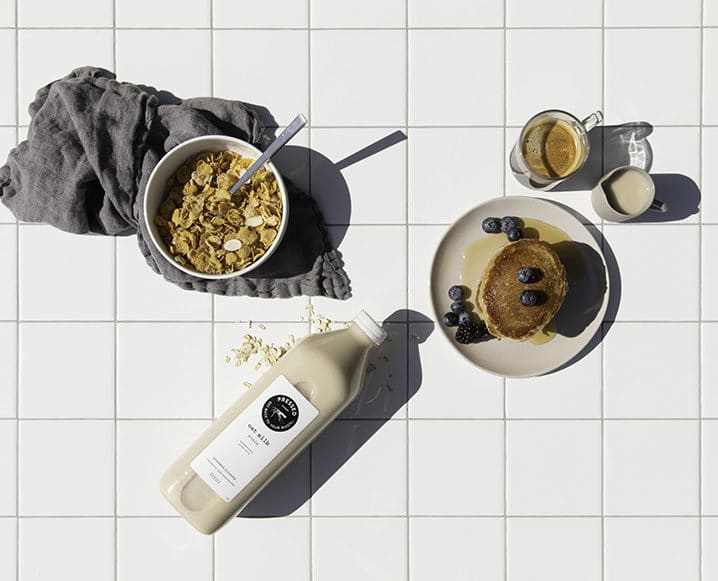 What’s the big deal about oat milk? Here in LA, the oat milk matcha latte has slowly taken over the beverage du jour — and with good reason. Whether you’re drinking it in a latte or pouring it over granola, there’s just something about the creamy texture of oat milk that’s better than the rest. Just after celery juice, you could call it 2019’s beverage of the year.

Choosing a healthfully-made oat milk is key. When it comes to clean eating, it’s not what you eat, but how what you eat was made that seems to matter most. We’ve been swooning over Pressed Juicery’s new oat milk (they even make a matcha version!) and were glad to learn that it is gluten-free, free of gums and stabilizers, and packed with fiber, protein and essential nutrients.

With the long list of milk substitutes out there, we decided to cut through the white noise (or milk, if you will) and give you insights on one of the healthiest, tastiest and most environmentally-friendly milk alternatives out there. We asked Dr. Axe for  few notes on the benefits of oat and were happy to learn about oat milk’s benefits…

Oat milk is a vegan alternative to cow’s milk that’s been gaining widespread popularity recently. It’s made by blending one cup of soaked, old-fashioned rolled oats in a blender with about three cups of water and then pouring the liquid through a cheese cloth to extract the milk. Depending on which oat milk recipe you’re using, you can also add cinnamon, vanilla, dates or other natural sweeteners to to enhance the flavor.

Thanks to its growing popularity, oat milk is now available pre-made at many grocery stores and health food markets. Not only have food manufacturers made it easier than ever to enjoy this type of milk, but they also often add extra vitamins and minerals to create a product that’s rich in many micronutrients found in cow’s milk, such as vitamin A, calcium, riboflavin and vitamin D.

1. Lactose-Free and Vegan
Whether you avoid conventional milk to minimize your intake of animal products or because the lactose found in milk simply doesn’t agree with your stomach, oat milk is a good alternative. It’s made from oats and water, so it’s free of both dairy and lactose, making it an ideal substitute for those with dietary restrictions who may be following a dairy-free diet.

Much like other nut milks, it can be easily swapped in for milk in many different recipes. You can use it in cold desserts like pudding or ice cream or even add it to your morning bowl of cereal for a quick and convenient vegan milk alternative.

2. Helps Prevent Anemia
Anemia is a serious condition characterized by a lack of red blood cells in the body. This can result in a long list of anemia symptoms, ranging from fatigue to pale skin and beyond. There are many different conditions that can result in anemia, but it is often caused by a lack of certain essential nutrients required for the synthesis of red blood cells, such as iron and vitamin B12. For this reason, those on a vegetarian or vegan diet are at an even higher risk of anemia, as most plant foods are lacking in these important micronutrients.

Just one cup of oat milk contains approximately 10 percent of the iron you need in the entire day, making it an especially good source for vegans and vegetarians. Paired with other iron-rich foods, such as spirulina, lentils and dark chocolate, adding a serving or two of oat milk into your diet can help promote healthy red blood cell production and prevent anemia. (2)

3. Lowers Cholesterol
Oats are well-known for their heart-healthy benefits and ability to keep cholesterol levels in check. This is because they contain a type of soluble fiber called beta-glucan, which has been shown to have potent cholesterol-lowering properties. Interestingly enough, research has found that the beneficial effects of beta-glucan in oats are even retained in oat beverages like oat milk. (8)

A human study published in the Annals of Nutrition & Metabolism found that drinking oat milk for five weeks significantly lowered levels of both total and bad LDL cholesterol to a greater extent than rice milk. (9) Another study out of the University of Lund’s Department of Applied Nutrition and Food Chemistry in Sweden had similar findings, reporting that drinking oat milk for just four weeks was effective in reducing cholesterol levels in healthy subjects. (10)

When it comes to taste and texture, oat milk has a naturally sweet flavor like almond milk and is thin, much like skim milk. Like other nut milks, it’s usually available in several different flavors, such as chocolate or vanilla, although it’s also possible to opt for unsweetened oat milk and unflavored varieties as well.

What about calories in oat milk? In terms of nutrition, oat milk is higher in calories and carbohydrates than almond milk but also contains more protein and fiber. Much like oat varieties, almond milk is often enriched with micronutrients, such as vitamin D and calcium. However, there are some minute differences between the two — almond milk also contains vitamin E, for example, but is lower in riboflavin.

Oat Milk in Ayurveda and TCM

Oats fit seamlessly into an Ayurvedic diet and are also commonly used in Traditional Chinese Medicine to treat a variety of conditions.

In Ayurveda, oats are used to reduce appetite, promote regularity and increase stamina. They are also believed to have sedative, calming properties and are especially nutrient-dense and nourishing. They can help balance the vata dosha but may aggravate both pitta and kapha doshas depending on how they are prepared.

Where to Find (Oat Milk)

Wondering where to buy oat milk? While it may not be as easy to find as other milk alternatives, such as almond milk or soy milk, it is becoming increasingly available due to its recent rise in popularity. You can usually find it near the other nut milks in the health food section of your local grocery store. You can also find certain oat milk brands through online retailers as well. Be sure to look for an unsweetened variety, and check the ingredients label carefully to pick a product with a minimal amount of added ingredients.

If you’re having difficulty finding oat milk, you can also try making it on your own. Not only does this give you complete control of your ingredients, but it also allows you to make your oat milk unsweetened and free of preservatives. To make your own oat milk, simply soak a cup of oats in water for 30 minutes, then combine with three cups of water and blend in a food processor. Using a cheese cloth or nut milk bag, you can then strain the milk and enjoy.

How to Use Oat Milk

There are plenty of potential uses for oat milk. You can swap it in for conventional milk in your cereal and overnight oats or use it to whip up certain types of desserts that don’t require cooking, like pudding or ice cream. You can also use it in your favorite beverages and add it to your morning smoothie, latte, tea or coffee. Just be sure to avoid directly heating this milk as it can thicken and develop a gelatinous texture.

Plant-based milk has long been used as an alternative to conventional milk by those with allergies or dietary restrictions, as well as those looking to reduce their consumption of animal products.

For many years, soy milk was the leader in plant-based milk alternatives due to its long shelf life, nutrient density and versatility. However, around 2010, almond milk began growing in popularity and surpassed soy milk as the most popular variety consumed in the United States by 2013. (13)

According to recent data released from Nielsen, plant-based milk products make up about 9.3 percent of all milk sales in the U.S. (14) In addition to soy, oat and almond milk, new varieties, such as hemp milk, coconut milk, rice milk, quinoa milk and hazelnut milk are also available, each providing its own unique set of health benefits and nutrients.

Oat milk can be a healthy lactose-free and vegan alternative to conventional milk, but there are some oat milk negatives that need to be considered as well.  It’s important to consider oat milk nutritional information and nutrition labels.

If you have a gluten intolerance or sensitivity, you should be sure to select only oats and milk that are certified gluten-free. This helps prevent cross-contamination to ensure that your milk is completely free of even trace amounts of gluten.

Additionally, while commercial oat milk is enriched with many of the micronutrients found in cow’s milk, homemade oat milk does not contain these same added vitamins and minerals. If making your own, be sure to get these important nutrients from other sources in a well-balanced diet.

When buying oat milk, look for brands that are unsweetened and contain minimal added ingredients. This helps preserve the health benefits and nutritional content and reduces the risk of adverse side effects caused by extra ingredients, like preservatives or additives. Oat milk ingredients should be healthy and minimal.

Oat milk is a popular milk alternative made by blending soaked oats with water and straining out the solids to produce a milk-like beverage. It’s vegan, soy-free, lactose-free and often gluten-free as well. Incorporating oat milk into your diet may help boost immunity, lower cholesterol levels and prevent anemia. Oat milk provides a unique array of nutrients and can be enjoyed on a healthy, well-rounded diet as a nutritious alternative to conventional milk.

Notes and attribution from Dr. Axe found here. The Chalkboard Mag and its materials are not intended to treat, diagnose, cure or prevent any disease. All material on The Chalkboard Mag is provided for educational purposes only. Always seek the advice of your physician or another qualified healthcare provider for any questions you have regarding a medical condition, and before undertaking any diet, exercise or other health-related programs.