Does Oat Milk Deserve to Be Your New Go-To? 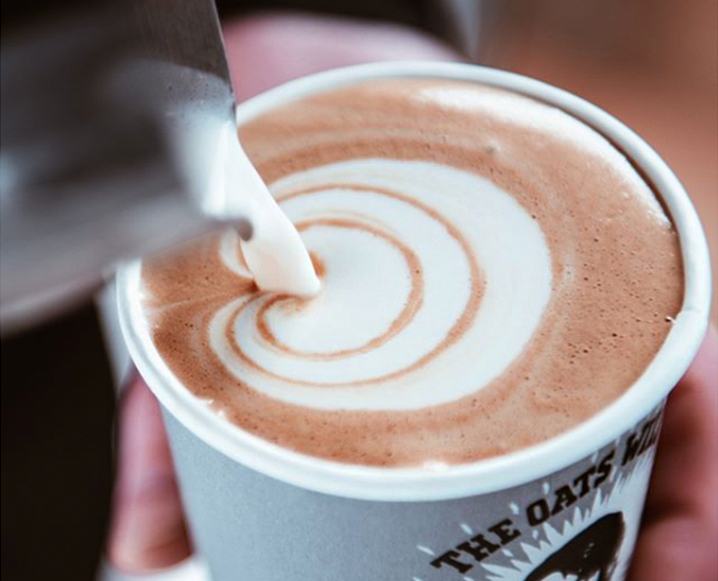 Oat milk is making a splash lately, but we’ve hesitated to fill up our lattes and breakfast bowls with the stuff. We love the creamy flavor and rich consistency but is oat milk actually good for you? What are oat milk benefits?

Some pros argue that while oat milk isn’t necessarily bad, it’s less nutritionally balanced than almond, hemp or coconut milks with their variety of proteins, minerals and brain-boosting healthy fats — and may contain inflammatory add-ins if we’re not careful about sourcing.

However, oats have their own unique health benefits and oat milk is one of the more delicious plant-based options to replace milk and cream.

We asked Dr. Josh Axe to give us the good, the bad and the ugly on oat milk. Discover everything you could possibly want to know…

Oat milk is a vegan alternative to cow’s milk that’s been gaining widespread popularity recently. It’s made by blending one cup of soaked, old-fashioned rolled oats in a blender with about three cups of water and then pouring the liquid through a cheesecloth to extract the milk. Depending on which oat milk recipe you’re using, you can also add cinnamon, vanilla, dates or other natural sweeteners to to enhance the flavor.

Thanks to its growing popularity, oat milk is now available pre-made at many grocery stores and health food markets. Not only have food manufacturers made it easier than ever to enjoy this type of milk, but they also often add extra vitamins and minerals to create a product that’s rich in many micronutrients found in cow’s milk, such as vitamin A, calcium, riboflavin and vitamin D. Oat milk is relatively low in calories but contains protein and is usually enriched with vitamins and minerals like calcium, riboflavin and vitamin D. Commercial varieties may also contain added ingredients that are used to extend shelf life and enhance flavor. Keep in mind that homemade oat milk nutrition may differ slightly and may be lower in many of the micronutrients that are added by food manufacturers.

Helps Prevent Anemia | Anemia is a serious condition characterized by a lack of red blood cells in the body. This can result in a long list of anemia symptoms, ranging from fatigue to pale skin and beyond. There are many different conditions that can result in anemia, but it is often caused by a lack of certain essential nutrients required for the synthesis of red blood cells, such as iron and vitamin B12. For this reason, those on a vegetarian or vegan diet are at an even higher risk of anemia, as most plant foods are lacking in these important micronutrients.

Just one cup of oat milk contains approximately 10 percent of the iron you need in the entire day, making it an especially good source for vegans and vegetarians. Paired with other iron-rich foods, such as spirulina, lentils and dark chocolate, adding a serving or two of oat milk into your diet can help promote healthy red blood cell production and prevent anemia.

Strengthens Bones | Commercial oat milk is often enriched with both calcium and vitamin D, two important micronutrients that play a central role in bone health. Approximately 99 percent of the calcium in your body is found in your bones and is used to regulate bone development and maintenance. Meanwhile, vitamin D works to enhance the absorption of calcium to boost bone health even more.

Upping your intake of both calcium and vitamin D is often recommended in the treatment of conditions like osteoporosis to help keep your bones strong. According to a review out of the University of Cologne’s West-German Osteoporosis Center in Germany, having low levels of calcium and vitamin D may result in an increase in the breakdown of bone cells, plus a higher risk of bone weakness and fractures.

Boosts Immunity | When you start feeling a bit under the weather, oat milk may not be the first thing you reach for. However, you can start incorporating it into your diet regularly to help boost your immune system. Most commercial oat milks are a great source of vitamin D and vitamin A, two nutrients that are essential when it comes to enhancing immunity and warding off illness and infection. Studies show that vitamin D is linked directly to immune cell function, and a deficiency may even be associated with a higher risk of autoimmune conditions, like type 1 diabetes, Crohn’s diseaseand multiple sclerosis. Similarly, vitamin A can alter the immune response and may help improve the outcomes for certain types of infectious disease.

Lowers Cholesterol | Oats are well-known for their heart-healthy benefits and ability to keep cholesterol levels in check. This is because they contain a type of soluble fiber called beta-glucan, which has been shown to have potent cholesterol-lowering properties. Interestingly enough, research has found that the beneficial effects of beta-glucan in oats are even retained in oat beverages like oat milk.

A human study published in the Annals of Nutrition & Metabolism found that drinking oat milk for five weeks significantly lowered levels of both total and bad LDL cholesterol to a greater extent than rice milk. Another study out of the University of Lund’s Department of Applied Nutrition and Food Chemistry in Sweden had similar findings, reporting that drinking oat milk for just four weeks was effective in reducing cholesterol levels in healthy subjects.

Although it may come with some potential health benefits, there are some oat milk dangers that need to be considered as well.

While buying your oat milk can definitely save you some time, commercial varieties are often pumped full of additives, preservatives and sugars that may diminish some of its health-promoting properties. Although it often contains added vitamins and minerals that can actually be beneficial, oat milk often also contains thickeners and emulsifiers that may impact digestive health and could alter the gut microbiome.

Additionally, although oats are naturally gluten-free, they are often processed in facilities that also process other gluten-containing grains like wheat or barley, resulting in cross-contamination. If you have celiac disease or a sensitivity to gluten, you should opt for certified gluten-free oats or oat milk to avoid cross-contamination.

Oat milk is also not as naturally nutrient-dense as conventional milk. While an enriched variety is a good source of many of the vitamins and minerals found in milk and can be a suitable substitute for milk in terms of nutrition, making your own oat milk at home may require you to ensure that you’re getting these important vitamins and minerals from other sources in your diet.

Oat Milk vs. Other Milks

When it comes to taste and texture, oat milk has a naturally sweet flavor like almond milk and is thin, much like skim milk. Like other nut milks, it’s usually available in several different flavors, such as chocolate or coffee, although it’s also possible to opt for unsweetened and unflavored varieties as well.

In terms of nutrition, oat milk is higher in calories and carbohydrates than almond milk but also contains more protein and fiber. Much like oat varieties, almond milk is often enriched with micronutrients, such as vitamin D and calcium. However, there are some minute differences between the two — almond milk also contains vitamin E, for example, but is lower in riboflavin.

Additionally, milk from oats is a bit more limited in its potential uses. While both conventional milk and almond milk can be warmed up using moderate heat, oat milk becomes more thick and gelatinous when heated. For this reason, it may not be the ideal choice to use in place of milk for recipes that require heat, such as baked goods or hot beverages.

How To Make Oat Milk

Add oats, water, salt, and any additional sweetener to a high-speed blender. Blend for about 1 minute or until the mixture seems well combined. Over-blending can make the oat milk slimy in texture.

Pour the mixture over a large mixing bowl or pitcher covered with a very thin towel, cheesecloth or clean T-shirt. Transfer to a sealed container and refrigerate for up to 7 days.