Ghee Pancakes: Why You Should Eat More Butter 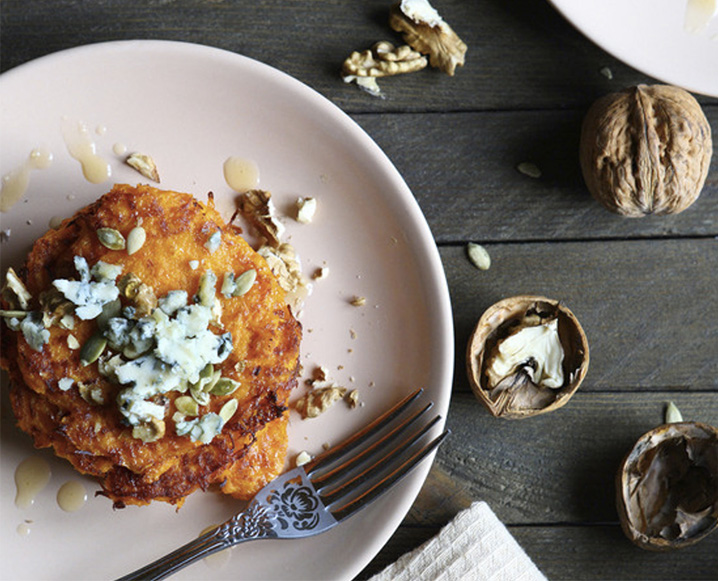 Thinking of butter as a taboo food is such a thing of the past. A short-lived past at that. For millenia butter has been prized in diets across the globe as a health food staple.

If you’ve snubbed butter for years or have indulged in it, but felt guilty every time, we have the best news for you. We’re giving butter a second look and talking to one small batch ghee producer named Tava who is letting us in on everything we’ve been wanting to hear. Get to know all about ghee, a deeply nourishing, traditional food – and remember that eating is believing: these pancakes are revelatory.

The Chalkboard Magazine: Can we simply start with talking about what ghee is?

Raquel Tavares Gunsagar: Ghee is an ancient Indian pantry staple used in cooking and in ayurveda (a holistic Indian medicinal practice). It’s the way butter was once served, in the form of clarified butter. I like to call it a butter reduction that’s been filtered through a sieve. The boiling removes the water and the filtering removes the dairy solids, leaving a lactose-free oil that has powerful health benefits that’s easy to cook with.

TCM: We’ve been talking a lot about butter lately. What is the nutritional value? Most of us have been taught to view butter as a ridiculous indulgence.

RTG: Butter alone has health benefits that it shares with its cousin, ghee. Some butter benefits, namely in grass-fed butter, include: possible lowered risk of heart disease due to the K-2 vitamin, which essentially de-calcifies the arteries; more heart-saving benefits from the high omega-3 fatty acid content; and better digestion via the high butyrate content, an acid that has also been proven to lower inflammation.

However, the pivotal fact is that these benefits come from butter made from the milk of grass-fed cows. Ghee is better because it’s the purest form of butter so you will get more benefits in less quantity. Butter is also acidic to body, whereas ghee is alkalizing. Ghee also has benefits when applied topically to the skin, and when used in the ayurvedic modality. When taken with medicine or herbs, those doses are better absorbed into the body. Ghee is also lactose free, casein free, shelf stable, ridiculously easy to cook with due to its high smoke point and is the best part of butter. It’s the better butter.

TCM: Ghee is considered a therapeutic food in some traditions. What has it been used for therapeutically?

RTG: Ghee can be used topically on the skin for skin abrasions, wounds and chapped lips, or as a facial moisturizer. In ayurveda, it’s used in massage, as well as daily cleansing by taking specific dosed amounts orally. It’s also used to mix with herbs that help balance and detox the body in a Indian product called Chavanprash.

It can be used in the morning in hot milk or coffee as an easy way to calm the bowels and to prompt bowel movement or taken at night with warm milk to calm the nerves. It is also known to increase longevity and slow the aging process.

TCM: Your flavored ghees are amazing. We used the vanilla ghee to make “Bulletproof” coffee. Is buttered coffee a popular topic for your team?

RTG: Oh yes! We like to put our butter in just about anything. We have even made salad dressing with it, but nothing is better than the Bulletproof coffee with our vanilla bean ghee.

TCM: Would you share a recipe with us for one of the flavored ghees?

RTG: I love to make pumpkin pancakes and cook them in either the Himalayan salt ghee for a crunchy salty sweet pancake or in the vanilla bean ghee for a sweet delish and healthy treat. I would recommend it to just anyone!

Sift together first three ingredients with sifter – or a fork will do – to prevent lumps. In a separate bowl, mix egg and yogurt, then add it to flour mix, stirring until just smooth. Then stir in butter. If you want to mix it up, throw in chocolate chips, blueberries, a tiny dice of apple or bits of banana.

Grease a griddle or nonstick pan with cooking spray or a little vegetable oil. Heat pan on medium for about ten minutes. Pour batter to form pancakes of whatever size you like. Cook first side until bubbles form on top, about three minutes, then flip and cook other side until it, too, is brown – about two minutes.

Serve immediately with ghee and syrup, or hold briefly in warm oven.