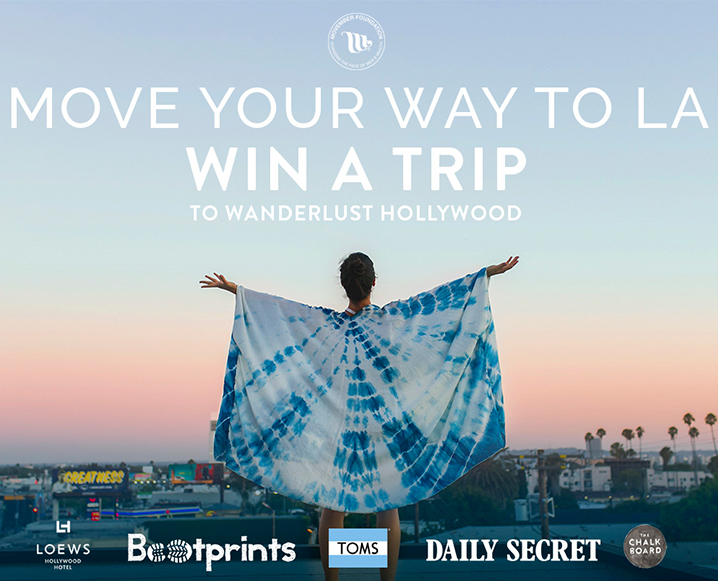 You know the type: Technically, they’re ‘senior citizens’ but they have a vibrant energy about them that transcends age. We watch them sail past 70 without a backward glance and start to see aging in a whole different way. More often than not, these kinds of elders have been dedicated to some sort of movement for their entire lives: cycling, yoga, running, climbing… you name it, they move. And they usually have a secret or two to share.

Our friends at Wanderlust Hollywood sat down with 76-year-old yogi Germán Bravo-Casas to learn about a few of the lessons he’s learned in his 60 years of practice. Get inspsired, then check out our offer of the ultimate yoga trip to L.A.! We’ve partnered with Wanderlust Hollywood and Movember to bring you fall’s best yoga giveaway: A week-long unlimited yoga vacation in LA including at stay at Loew’s Hollywood. See below for details on how to enter and keep on moving, no matter your age…

I remember the day I met Germán Bravo-Casas, the gentleman who would be leading the more literary, scholastic portion of my teacher training program at Yoga to the People. He passed around two very important yogic texts: a yellowing and clearly beloved translation of The Upanishads … and an equally dog-eared copy of Cat Yoga: Fitness and Flexibility for the Modern Feline

. A classic tome and hilarious kittens – here was a man after my own heart.

Listening to Germán lecture on yoga (or, in his silky Colombian accent, “joh-gah”) is a unique honor. He’s been practicing yoga since 1961, is the President of the Yoga Club at the United Nations, and continues to lead teacher trainings as a scholar and academic (no, really – he has an entire room of his home dedicated to yoga literature).

Though it’s tempting to just gawk at senior yogis, I’m more interested in discussing the power of a long-term practice and teasing out the truths they’ve learned in that time. Because one truth I know for sure is that in order to be a good teacher, one must first be a good student. Germán taught me that.

I had the opportunity to ask him some questions about his life’s practice and what it’s truly like to be a senior yogi.

wanderlust’s Jessica Kulick: How long have you been practicing yoga?

Germán Bravo-Casas: I am 76 and I started when I was 15. At age 15, I was suffering from pain in my joints and I was diagnosed with arthritis. My doctor recommended two things: Reduce the consumption of red meat and to do yoga.

jk: What has been the most important long-term benefit of your yoga practice – is it the physical strength? The meditative aspect? Something else?

jk: What are the challenges of being a senior yogi – is it hard to stabilize the joints of a body that is older but still flexible? Is it being part of an under-represented population in the studio scene?

GBC: Patanjali defined yoga as “the control of the fluctuations of the mind.” That control is difficult to achieve when we are young, but a strong and vigorous physical practice is a good tool. As we age, we don’t need too much of that physical practice… As we age with a solid practice, we are able to relax more easily and to have a “steady and comfortable posture,” which is what Patanjali considers the physical way to achieve the stillness of the mind.

jk: What are you capable of now that you weren’t when you first began practicing?

jk: Do you have a favorite pose to practice?

GBC: I have many favorite poses, including padmasana (lotus) for meditation; sarvangasana and sirsasana (shoulder and headstand are good inversions); mayurasana (peacock for arm balance); and agni sara (combining the stomach lift or uddiyana bandha with pumping the abdomen).

Interviewer’s note: Germán’s mayurasana is legendary amongst YTTP alumni, partly because he’ll be in the middle of lecturing, then jump into the pose (in khakis and polo shirt, no less!), and then go right back to serious discussion like nothing ever happened – amazing.

jk: What do you wish you saw more of in the yoga community? How has the yoga world changed since you first began practicing?

GBC: It is estimated that we have around 20 million people practicing yoga in the U.S. today, and there are ten thousand new yoga teachers trained each year. Yoga is still expanding as a fashion and there is a large “biodiversity” of schools, practices, and styles, many of them corresponding more to the capricious personality of some of the teachers.

Through the years, I am more convinced that what really is important is to maintain a regular yoga practice. Yogi Berra used to say: “In theory there is no difference between theory and practice. In practice there is.” This applies perfectly in yoga. You can have a wonderful knowledge of yoga anatomy and yoga philosophy, but what finally helps us to achieve “personal transformation” is practice. That is why I insist in the teacher training program that the role of a teacher is to help the students to discover the teachers inside themselves. Yes, we should continue to study the classic texts – The Yoga Sutras of Patanjali, The Bhagavad Gita, The Hatha Yoga Pradipika, and other seminal works – but the most important part is practice.

Feel free to visit the Yoga Club at the United Nations Facebook page to connect.

WIN OUR “MOVE your way to LA” Giveaway

Sign up for MOVE and enter to win a yoga trip to L.A., courtesy of Wanderlust Hollywood, the Movember Foundation, Daily Secret, Bootprints, TOMS and The Chalkboard Mag. MOVE is Movember’s latest way to raise funds for men’s health.

Make the 30-day pledge to MOVE, sign up here, and be entered to win!

This giveaway closes on November 10, 2015 at 5 p.m. P.S.T.  Open to continental U.S. & Canada residents only (Quebec excluded). Winner will be chosen at random.