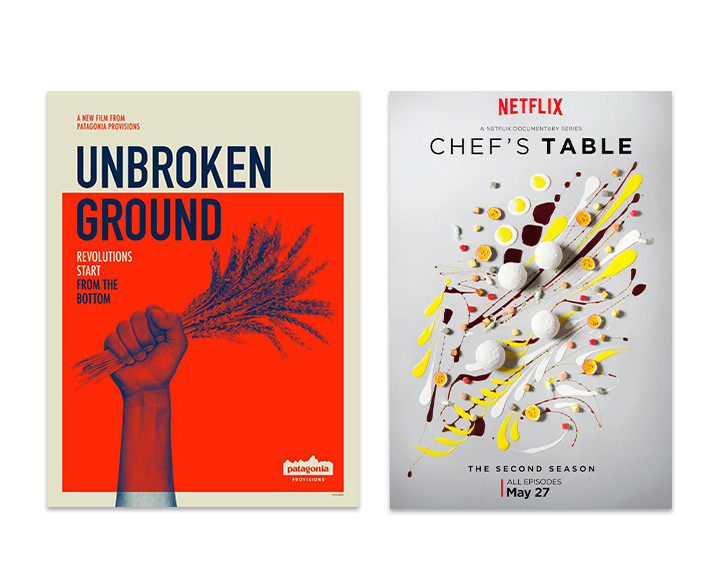 Which docs are you obsessed with? Same. Maybe? We think we know what you might like and this hit list from our friends at Darling is pretty close to it.


We can’t get enough of every season of Chef’s Table – and you should check out our coverage of GMO, OMG, The True Cost, and everything our friends at Food Matters have to say about health docs!

1. Chef’s Table
The same man (David Gelb) who created Jiro Dreams of Sushi thought up this docu-series, so it’s no surprise that it is a visual masterpiece. Feast your eyes here if you are remotely intrigued by foreign flavors, faraway lands, or the grand risks that the world’s highest ranked chefs take in order to pursue their passion for creating and feeding people. Although you may be tempted to start this series from its beginning, we recommend starting with episode three of the first season. It’s the biographical piece on Francis Mallmann, in which Patagonia’s scenery is stunningly crisp and the chef’s tactics so wonderfully complement it.

This recent release is a work by Oscar-nominated director, Amy Berg. It lets us into the deeper caverns of Janis Joplin’s life story, which is an innovative feat. Joplin’s creative life is laid bare here, as Berg ventured to tell her story in a way that honored the artist’s own, genuine perspective. Berg stated, “The only way to tell Janis’ story was through Janis’ voice. Her letters show the vulnerable artist, daughter, and lover Janis was in her short but impactful life.” While Joplin’s tumultuous story is a heavier choice, we find this lead female rock ‘n’ roller’s story to be a necessary window into the history of American women’s relationship with music.

3. Alive Inside: A Story of Music & Memory

While we’re on the topic of music, we found this documentary to be particularly unique. If you are looking for an uplifting, mentally-stimulating watch, this would be it. Filmmaker Michael Rossato-Bennett reveals the healing quality of music, its ability to overcome human medical travesties where medication is not enough. Social worker Dan Cohen is shown utilizing the great power of music to combat Alzheimer’s and redeem people from years of solitude and hopelessness. Those who are featured in this film are truly seen brought to life by the freedom of song.

This piece, directed by Cynthia Hill, is a flame held up to the frustratingly common exploitation of women. In the film two survivors of domestic violence, Deanna Walters and Kit Gruelle, bravely share their experiences with partner abuse. Their stories debunk modern assumptions and unveil the reality of an ugly, invisible world that lurks within the homes of too many. On this visual platform, women claim their voice; they are heard and they are finally honored in their truth. Both women guide us into a future without domestic violence.

We’d call this one of those “oldies but goodies.” Released in 2011, it might not be so old, but it already feels like a classic. Director Roko Belic takes his audience on an adventure to answer the infamous question: What really makes people happy? He broadcasts people’s experiences with happiness, pointing us in a direction to achieving greater happiness throughout our days. Watching this is akin to listening to a chorus of wise elders whispering into our ears, “These are the things you must practice before you die, young ones!”

6. Somm: Into the Bottle

If you consider yourself a wine connoisseur in any capacity, this documentary was pressed for your palette. The engaging sequel to Somm, this piece is segmented into 10 chapters and conveys the multi-faceted process of winemaking, without forsaking the ultimate enjoyment of drinking it. Wine, beer, and spirits writer Esther Mobley shared in her review of the film, “As a wine lover, I’m most interested in this question when it comes to books, films, TV shows about wine: Does it convey the pleasure of drinking wine? That’s the ultimate litmus — and the reason that any sommelier (even those that love taking hard tests) does what she does. On this count, Somm: Into the Bottle succeeds. It leaves you thirsty.”

Deep in the Congo is Virunga National Park, where the last mountain gorillas live. Orlando von Einsiedel and Leonardo DiCaprio have teamed up to share the bold work of a small band of park rangers, including an ex-child soldier, an orphaned gorillas’ caretaker, and a conservationist who preserve and safeguard this UNESCO world heritage site from its adversaries. While militia and poachers threaten to undertake this area, its protectors remain emboldened with their convictions and, further into the documentary, even the filmmakers get involved in the tumult that surrounds this corner of the world. This one truly is a grand story, complete with risk, courage, and relevant purpose.

8. Going Clear: Scientology and the Prison of Belief

If you have ever been curious about the grey controversy that lies beneath Scientology, please sit down to this film. Alex Gibney presents eye-opening angles by shining a light on former members of the Church of Scientology, revealing a highly discomforting abundance of injustices that skulk beneath its facade. This pick surely does provide a refreshing clarity and leaves us with a renewed sense of moral conviction to stand by those values which ring true to our very bones, rather than submitting to the faulty authority of those who might be hungry for power.

This one is a miraculous product of modern technology and, in an interesting way, it speaks to a deep sense of wonder that all humans can relate to. (Remember being a kid and questioning whether there was another person “out there” with your same interests, your same thoughts, your same face?) Samantha Futerman and Ryan Miyamoto record the incredible inter-national discovery and reunion of two separated twins, one of which being Futerman herself. Futerman and Anaïs Bordier, adopted from South Korea and raised on different continents, find one another through social media and spectacularly reconnect.

10. (Dis)Honesty: The Truth about Lies

This documentary appeals to one of our most commonplace curiosities. It reaches out to help us understand why lying is so prolific when we have all been taught its inherent immoral value. Intriguingly, it accomplishes a kind of human unification, humbling us with the reminder we are not as perfect as we might have previously believed; we are instead united in our flawed nature.

There’s a saying that the earth is not inherited from our ancestors but borrowed from our children. As much as we may have the best intentions to learn more about where our food comes from or what’s in season, our consumer culture disconnects us from the land, and can leave us asking too small of questions. In Unbroken Ground, Director Chris Malloy introduces agricultural pioneers challenging the environmental crisis by implementing biodiversity and regenerative methods for farming and fishing. Here you’ll meet families and towns who have made their livelihoods and local economies part of a new revolution.