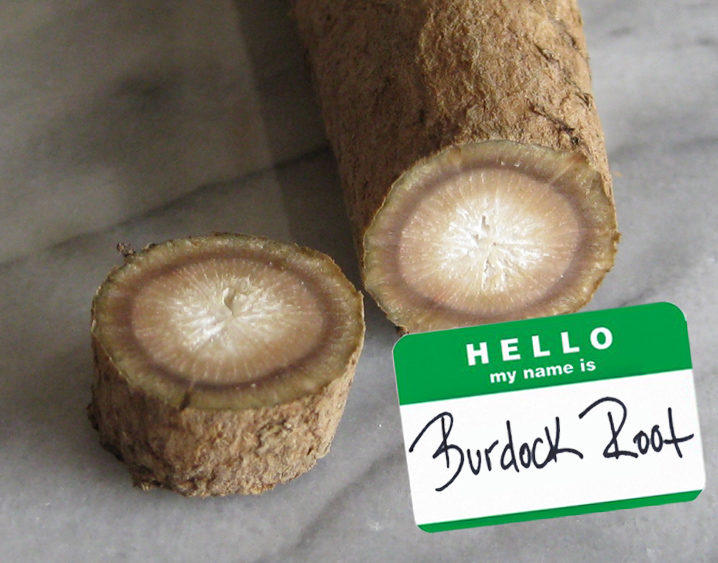 HERE’S WHAT YOU NEED TO KNOW: Burdock root grows on roadsides and around field boundaries throughout Britain, much of mainland Europe and North America. It is cultivated in Japan, where it is called gobo, and the root is consumed as an everyday vegetable – similar to a carrot. There is considerable evidence in scientific literature that burdock root tea is a powerful anti-inflammatory remedy. Its numerous antioxidants protect the liver from toxic chemicals, allowing it to process the body’s naturally occurring steroids which are helpful in achieving hormonal balance.

What DoES IT Bring To The Plate: Fresh burdock root contains polyacetylenes, which are phytochemicals that kill some types of bacteria and fungi; burdock has been used to treat both bacterial and fungal infections including ringworm, urinary tract infections and acne. Its antibacterial effects may also promote wound healing and help treat ulcers. Moreover, it is excellent for protecting and healing the liver.

A RECIPE FOR SUPERFOOD SUCCESS:

Heat the oil in a wok or large heavy skillet, medium-high heat, and then stir-fry the gobo and carrot for 5 to 8 minutes.

Add the shichimi-togarashi or cayenne and mix well. Then add the soy sauce and stir-fry until the liquid is absorbed.  Sprinkle with sesame seeds before serving. Can be served warm  or at room temperature.