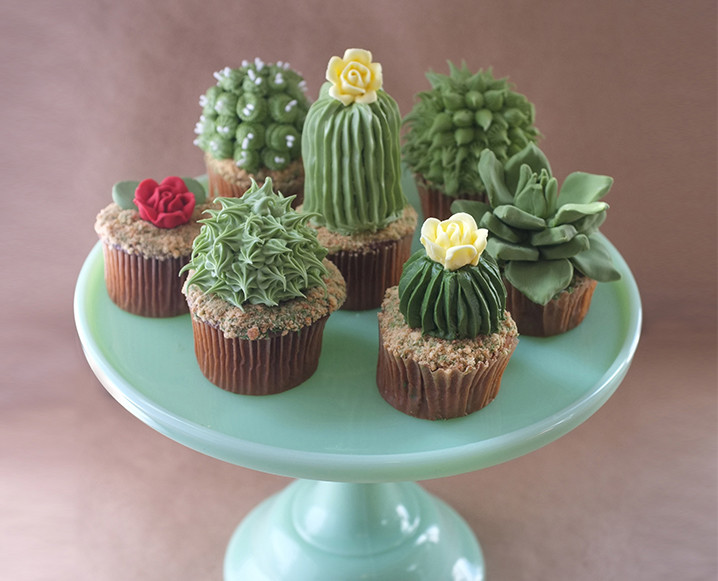 We almost broke the interweb earlier this year when we posted an Instagram photo of succulent cupcakes. We found the sweet stuff inside a party for one of our favorite surf brands, but were never able to track down the elusive baker.

When we came across these stunning, translucent crystal soaps by blogger, Alana Jones-Mann, it led us to her blog and – bingo – her glorious succulent cupcake tutorial. We’re not always big crafters, but when we saw Alana’s skills with a pastry bag and a silicone mold, we were inspired. Here’s our interview with the So Cal artist, blogger and talented DIY’er…

The Chalkboard Mag: How did you get started with the blog?

I had been working in marketing and events which was a great job, but I just wasn’t completely happy. On the side, I was always throwing themed parties for friends and would make all of the inspired-decor myself…it was the creative release I needed to make up for the lack of creativity I felt from 9 – 5.

For the baking side of things, that was a bit different.  I had started baking as a release after losing my best friend…it was strange because I hadn’t really been that into baking prior, but as I was coping with the loss I found that baking in my kitchen was the only place I could feel at ease and I quickly became obsessed with it. I took that as a sign and decided to do what I love every day, because life is too short not to. I started casually posting pics of parties and desserts I had made, and then after receiving some requests, I began to post DIY tutorials to accompany my creations. It was all very organic and has always just been something I do because I love to do it.

TCM: Describe for us your personal brand ID in three words:

TCM:Have you always been so inventive with the DIYs? The two picture above are blowing our minds!

Yes, I think so. I’ve loved crafting for as long as I can remember – I had a serious obsession with Martha Stewart in elementary school. And since I was younger, I’ve always felt the desire to figure out how to make something myself.

TCM: We love the crystal soaps and other crystal-themed art projects you do – how did that become a theme?

I don’t remember exactly – I know I had found myself very enthralled with the gem room at The Natural History Museum at one point, and I had just arrived back in NY after another inspiring and nature-filled trip home to California…so I think it was a combination of the two. I had the idea in my head for a while and then just decided to give it a go once I was back and feeling refreshed. I had originally made a small agate topper for one of my Gemstone Cupcakes, and then later decided to use the same process and make a set of Agate Cookies, an Agate Cheesecake, and then the Gemstone Soaps. There are just so many incredible details and such beauty inside stones, that it’s hard to stop trying to replicate those in a dessert or craft-based form!

TCM: What has been your most rewarding moment as a blogger?

Hmm – I’d say it had to do with my cactus cupcakes. I had made them years ago and it wasn’t until 2014 (more than one year to the date of me posting the DIY) that any of the larger sites noticed. The art blog ThisIsColossal first picked them up and from there it quickly started to snowball and get attention with bigger sites like Huffington Post, Buzzfeed, etc. It was the first time I received mass attention for one of my projects, so it felt really special.

TCM: Talk to us about the succulent cupcakes. We’re dying. Are they are difficult as they look?

They really aren’t too hard – and I know that for a fact because I’ve seen so many people re-create them after following along with my tutorial. I initially made those in NY at a time when I had been fairly homesick for San Diego, so I decided to pay homage to the desert landscape that I had been utterly missing at the time. It makes me very happy to see people recreating a project that was so special to my heart.

TCM: What are three creative inspirations for you right now?

I’ve been really inspired by printmakers and patterns from the 60’s and 70’s – especially the artwork of Frank Stella and Sol LeWitt. For modern inspirations, I love Mara Hoffman’s designs – the curation of her Instagram is also incredibly inspiring on it’s own. And I’ve been very inspired by artist Peter Zimmerman recently.

For books I’m currently reading “Be Here Now” by Ram Dass, “This Is It” by Alan Watts, and a book on southern California wildflowers from the 80’s.

My style has always been very 60’s inspired. I love colorful prints, collared dresses, and flares. I also am pretty much always wearing this one Greek Fisherman hat my grandfather gave me that he used to wear in the 70’s.

Exercise has always been a very important part of my routine – it’s a great (and mandatory) release for me…and it helps balance all the cake! Since moving to LA four months ago I’ve found a great Kundalini yoga class that has already had a huge impact on my life – it’s like going to therapy and the gym in one. I also love taking The Class with Natalie Kuhn. I used to go to Natalie’s classes in New York and was so happy to hear she was moving to LA and bringing The Class out here!

Here are the Succulent Cupcake instructions! Get to baking!