Would You or Wouldn't You: Wear Silver Clothing for EMF Protection 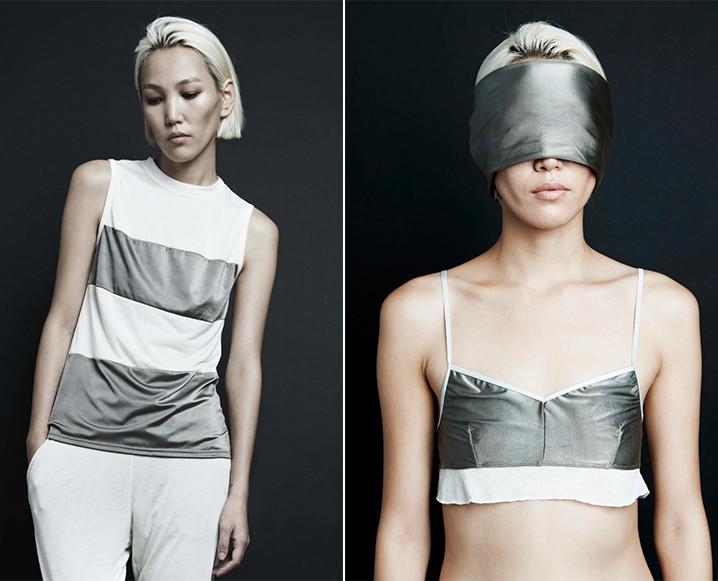 As addicted as we are to our wireless internet connection, cell phones and Netflix accounts, we know we’re swimming in a technological soup of sorts all day. And while there is still much research to be done on the effect of all this electromagnetic radiation, we’re always looking for small ways to safeguard ourselves from EMF overload. Let’s hope that research discovers something more positive than what most of us suspect – heck, maybe all this low level radiation is even good for our health? *crickets* Until then, we’re taking matters into our own hands and finding ways to reduce our exposure.

Tossing our tech isn’t exactly an option, so how far are we actually willing to go to protect ourselves? Previously in our “Would You Or Wouldn’t You” series, we asked if you would attach a crystal to your phone to counter EMF exposure. This time, we’re talking protection head to toe in the form of precious-metal-laced clothing.

When we came across Arjuna, a luxe brand that uses silver-coated fibers throughout it’s capsule collection of tops, headbands and wristguards, we knew we had to bring the brand across your radar. We asked founder,  Mikaela Bradbury, to walk us through the reasoning behind her futuristic-looking capsule and its incredible functional fabrics (some are made of milk!).

The Chalkboard Mag: So, Mikaela, what is ‘electromagnetic radiation’ in a nutshell for those who aren’t familiar?

Mikaela Bradbury: Electromagnetic radiation refers to energy formed by combined electric and magnetic fields that radiate out from a source, including visible light, radio waves, gamma rays and X-rays. Electromagnetic forces exists naturally within all matter, including the earth and the human body, and are vital for biological communication and processes. However, new forms of man-made electromagnetic radiation from cellphones and wireless communication networks pose potential risks to human health.

TCM: At Arjuna, you point out that in the past few decades we’ve changed the ‘electromagnetic background’ more than any other aspect of our natural environment. Can you unpack that a bit for readers who are new to the topic?

Today, we have changed our earth and body’s electromagnetic background more than any other aspect of the environment. With the rise of WiFi networks, high-voltage power lines, radio waves used for air and sea navigation, radio channels and military communications, we have introduced new man-made electromagnetic frequencies that drown out the earth’s natural frequency and, in turn, our own electromagnetic communication.

TCM: How does EM radiation cause us potential harm and where is that coming from?

The World Health Organization has classified man-made electromagnetic frequencies (EMFs) as a carcinogen and has recommended that individuals adopt the precautionary principle. Gro Harlem Brundtland, the former director-general of the World Health Organization, doesn’t even allow mobile phones in her office because the radiation gives her headaches.

As Martin Blank, PhD, associate professor and researcher at Columbia University, has stated, “Cells in the body react to EMFs as potentially harmful, just like to other environmental toxins, including heavy metals and toxic chemicals. The DNA in living cells recognizes electromagnetic fields at very low levels of exposure; and produces a biochemical stress response. The scientific evidence tells us that our safety standards are inadequate, and that we must protect ourselves from exposure to EMF due to power lines, cell phones and the like, or risk the known consequences. The science is very strong and we should sit up and pay attention.”

TCM: Tell us about silver and how you’ve incorporated it into these pieces:

MB: When applied to fabric in its ionic form (Ag +), silver generates a conductive shield that reflects man-made electromagnetic radiation away from the body and re-enforces your natural energetic field.

The material we use is coated with 18%-by-weight pure silver ions. It has been verified to shield 99.9% of electromagnetic frequencies from cell phones, computers, WiFi and radio networks, within the ranges of 30-3000 MHz. Until now, it has only been used for niche medical, industrial and military purposes.

Since ancient times, silver has also been known to be effective against a broad range of micro-organisms. The significance of silver’s anti-microbial abilities extends beyond the immediate benefit of protecting against germs to reducing the ‘bio-burden’ on our overall physiological system, freeing up energy to address other forms of toxic overload.

TCM: The accessories are especially unique. How do you propose that people use the head wrap? The arm cuffs?

MB: The Monkey Mind Band is best used as an eye mask for sleep or relaxation. It is intended to serve as a tool for turning inward and quieting a hyperactive “monkey mind.” It is ideal for travel because of the anti-germ and cooling properties.

The Computer Cuffs and Hand Guards are best worn when you’re working at the computer, as they neutralize the thermal and electrical fields and also reduce joint pain and inflammation. The wrist bands are particularly special to me because I find that hands and wrists are very sensitive ‘energetically,’ from a Eastern medicine perspective.

TCM: Some of your pieces are made of milk. Talk to us about how you discovered the unique fabric and what its benefits are:

MB: I discovered this milk fabric a few years ago when I was introduced to a sustainable textile distributor based in Italy. I immediately fell in love with the incredible softness of the material and also the psycho-emotional associations of milk as this nurturing and soothing substance. The material is actually created with milk protein that has been spun into a yarn and knitted with eco-viscose. The protein happens to have its own subtle health properties, including anti-microbial benefits and improving circulation.

TCM: Can you name a few other habits you love to help reduce EM radiation exposure and modern stress?

MB: I find that the most important thing for me is a morning ritual that includes some kind of meditation, visualization or positive affirmation and prayer. Positive thoughts and words are a powerful tool for raising your personal vibration and energy field. Mineral- and nutrient-rich foods and having direct connection with the earth also support your natural resilience to EM radiation and stress. And no phone before bed or first thing in the morning!