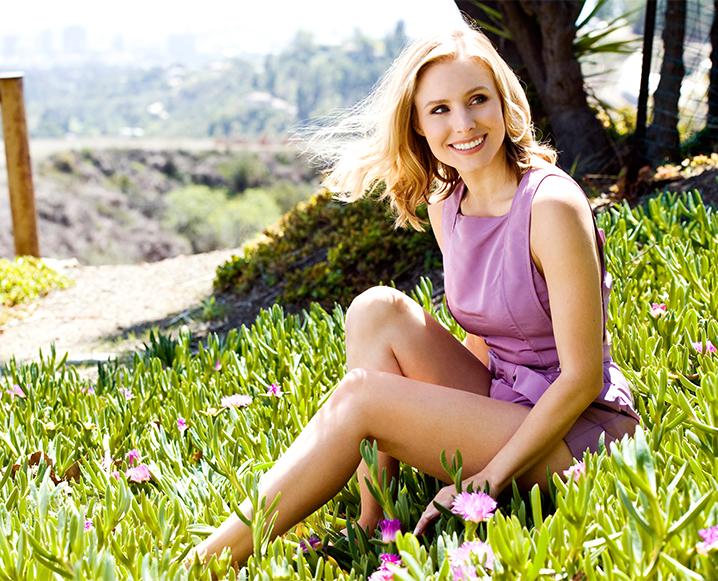 we can’t say enough about our October Guest Editor, Kristen Bell. And neither can anyone else we meet! Whether they’re obsessed with one of her cult-level shows, struck by her private charitable work, have latched on to her new commercial with husband Dax Shepard (find it through Twitter), or have immersed themselves in the world-wide frenzy known as Frozen, everyone we know has jotted us a note this week about their obsession with Kristen!

Last winter, despite years of successful voice-over work in Hollywood (“Xoxo…”), Kristen shocked us all with those pipes in Disney’s world-wide smash hit, Frozen. Inarguably some of the most prominent music of the year, Frozen proved that Kristen’s got a voice that carries.

We asked Ms. Bell to let us in on a few pro tips – to give us some voice lessons (both figuratively and literally) and talk to us about the importance of using her voice while she’s got the world’s attention. Through her involvement with This Bar Saves Lives and constant support for the No Kids Policy, we love that Kristen is using her spotlit status to bring attention to the causes closest to her heart. Her answers below are totally practical, completely inspiring, and absolutely ridiculous. Did we mention we love this woman? Here’s Kristen on her favorite words and about using your voice to its utmost potential…

The Chalkboard Mag: Finish this sentence: Using your voice as a celebrity is…
Kristen Bell: Both an occupational hazard and a useful job perk.

TCM: What is the cause you’re most willing to raise your voice for?
KB: The hungry, the homeless, the furry and the small.

TCM: Whether it’s someone who is marginalized or whose voice goes unheard –  or someone whose ideas you love, but don’t get enough attention – if you could ‘pass the mic’ to anyone, who would it be?
KB: Nicholas Kristoff. For President.

TCM: Totally. Whose voice do you love most?
KB: In song, Adele Dazeem. (Editor’s Note: OMG. Just Google it.)  In my home, from sweet nothings to a heated argument, always my husband.

TCM: What words would you love to say, if you could?
KB: Take me, Jon Snow, Dax won’t mind.

TCM: What are the words you most love to hear?
KB: Free refills.

TCM: Give us a legit singing tip, if you would…
KB: Breathe. Always breathe.

TCM: What is your go-to karaoke song?
KB: Anything Motown. And “Don’t Go Chasing Waterfalls,” obviously.

TCM: Obviously. Which ‘Frozen’ verse do you love to sing most?
KB: “Don’t know if I’m elated or gassy, but I’m somewhere in that zone.”

TCM: Despite the great voice, when are you silent?
KB: When it’s my turn to listen or when I feel like being the loudest.

, saltwater gargle and a whole lot of vocal rest.