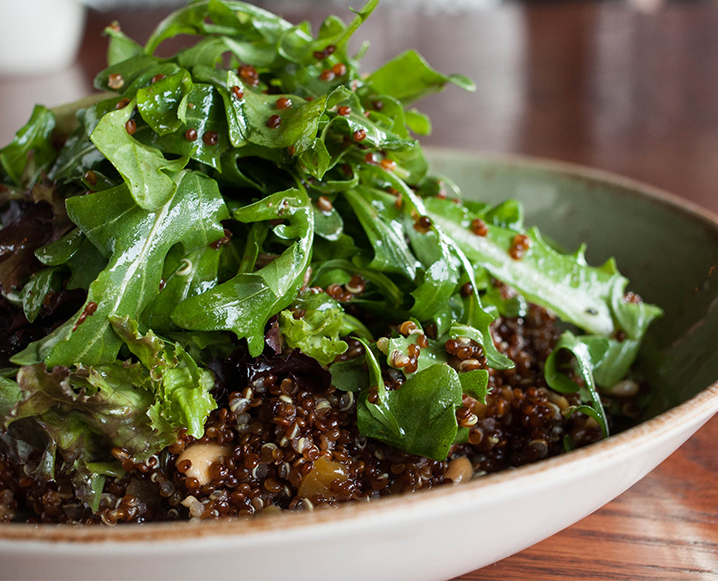 We’re forgetful, living in the middle of Los Angeles, that finding incredible vegetarian, vegan or macrobiotic meals while dining out can be a struggle. With hotspots like Gjelina, Gracias Madre and M Cafe offering up enough drool-worthy veggie dishes to turn even the staunchest carnivore, we get a little spoiled when it comes to eating healthy on the fly. Eating vegan isn’t as easy in most cities and veggie crusader Jessica Murnane is having a great time turning that vegan tide. Meeting with chefs in some of the best restaurants across the country – and especially in her meat-and-potatoes hometown of Chicago – Jessica is challenging menu-makers to add vegan plates that are up to par with every other dish on their menus. Vegan or no, this is one movement any God-fearing foodie can get behind!

We asked Jessica more about her delicious adventures and found out just how far this vegan plate project has come. Below, you’ll find one of the restaurant program’s latest results: Chef Nicole Pederson’s quinoa cashew salad with dried fruit. Chef Pederson (of Chicago’s FOUND Kitchen) recently added this vegan dish to her menu – and was also recently nominated Food & Wine’s Best New Chef. Make these grains at home or find a participating restaurant near you and show them your support! Here’s Jessica of One Part Plant…

The Chalkboard Mag: What is the idea behind One Part Plant Restaurant Partners?
Jessica Murnane: I’m partnering with some of the best chefs and restaurants in the country to offer more plant-based dishes on their menus. Most of these restaurants are heavily meat and dairy-driven, and haven’t offered a lot (or anything) in the way of veggie-focused dishes.

TCM: Clearly, this idea came from the organic experience of plant-based dining frustration – ordering the one salad on the menu only to find it is laced with bacon bits. Tell us a little about your motivation.
JM: When I first changed my diet, I didn’t really want to only go to vegetarian or vegan restaurants. I wanted to go to the newest, coolest, best spots in the city! But going to these places oftentimes meant I had to either eat beforehand or just get a weird side dish. I didn’t like asking for substitutions, and really didn’t like the special attention from servers or my dinner date. I simply wanted a fun, normal dining experience like everyone else. I knew there had to be lots of people that felt the same way – so I launched the restaurant program.

TCM: Who are a few of the chefs you’ve had the pleasure of working with so far?
JM: They’ve all been so great! Pat Sheerin (chef) and Matt Eisler (owner) at in Chicago are probably the ones who feel the most special because they were the first restaurant to say yes. Also, the team at Baked in NYC! They are a busy bunch with their bakery and cookbooks, but were so open to baking in a new way…and excited about it. I love them for that.

TCM: When you approach most chefs, are they normally aware of the need for a plant-based option already? Or is the suggestion of a plant-based menu option a new idea to most?
JM: Most of my partner chefs have all expressed that most nights they get special requests for substitutions or off-menu items for vegetarian/vegan diners, and they’ll generally just whip something up. But here’s the thing: they couldn’t explain why they didn’t just have an item already on the menu to cater to these patrons. A few chefs even admitted that not using butter or cream scares them. This program makes dining easier for both the diner and the chef by offering a veggie-friendly item that can be ordered right off the preexisting menu. Most kitchens already have the ingredients – it’s just a matter of using them in a different way.

TCM: Which restaurants/chefs/projects have been your favorite so far?
JM: David Burke’s Primehouse felt like such a huge win. The restaurant had never had a plant-based or veggie entree – it’s a steak house! The closest thing was their wedge salad. DPM’s chef Rick Gresh was really open to my concept and has been incredible to work with. Bill Clinton was in Chicago not too long ago and he ate at David Burke’s. He eats a veggie diet, and it made me so excited that there was an option for him. I’m sure former Presidents have a secret special menu just for them…but I like to think he ordered the OPP dish!

TCM: Do you find most chefs immediately gravitate toward a certain plate or certain ingredient for this?
JM: I have been so surprised and inspired by how creative the chefs are with the dishes. They really have all done such different things. They use their own personal style and then go wild with the plants.

TCM: Most incredible plant-based option created from the project yet:
JM: Hands down, Floriole‘s hazelnut chocolate cookie. Sandra Holl (the owner/chef) embraced the challenge and created one the best cookies I’ve ever tasted. It’s now one of the most popular items at Floriole, and they even stock it at Chicago Intelligentsia locations. And she let me publish the recipe in A Year of Cookies!

TCM: What would feel like success to you in this project?
JM: As of now, my greatest joy/sign of success is getting emails from people who didn’t know about the partnership, land at one of the OPP parter restaurants, and discover that they can actually eat something on the menu! But next level? I’d like to have a One Part Plant airline and sports stadium partner. I’m a huge NBA fan and dream of the day I can watch LeBron get schooled with some plant-based concessions in hand.

To prepare quinoa, add a small amount of oil to a medium-sized pot and toast the quinoa. Add stock, salt, bay leaf, thyme and garlic. Cook until tender. Strain off excess liquid and season with lemon juice, salt and extra-virgin olive oil.

To prepare bloomed dried fruit, place the coriander and grains of paradise into a sachet, then put all ingredients (except preserved lemon) into a pot. Add enough water to cover. Bring to a boil and turn down to simmer. Simmer until just tender. Season with salt to taste. Strain through a chinois, then fold in preserved lemon and place in refrigerator. Reserve liquid for vinaigrette.

To prepare vinaigrette, in a mixing bowl, add coriander, grains of paradise powder, thyme, fruit liquid, and balsamic vinegar. Whisk in a slow stream of extra-virgin olive oil until loosely emulsified. Season with salt to taste.

To plate, place the mixed bloomed fruit and toasted cashews in a mixing bowl. Add spinach or tender winter greens to the bowl. Drizzle with balsamic vinaigrette. Toss, season with salt to taste, and place on top of the quinoa.