No Sugar Cherry Crumble In A Jar (Gluten Free Too + Tastes Amazing!) 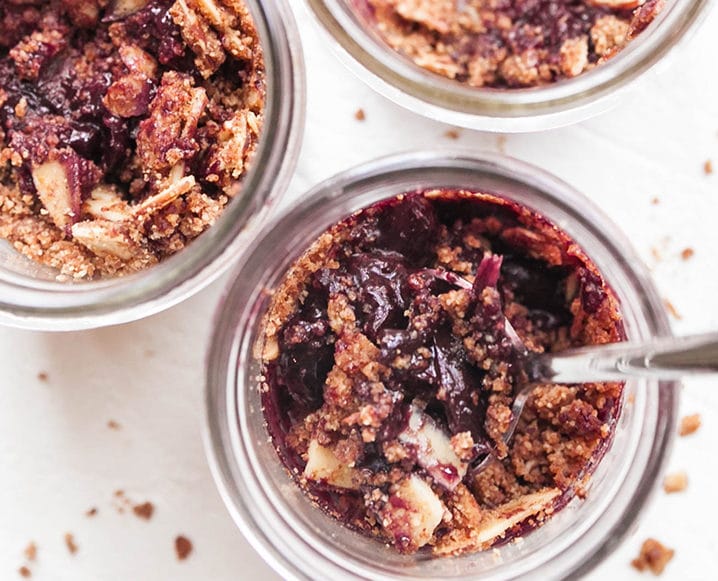 Lucuma is a nutrient-dense sweetener that’s incredibly low in sugar and has a subtly maple-like flavor to it. Of all the sweeteners we’ve tried, it’s one of our favorite alternatives to white sugar for baking and provides an incredible source of antioxidants, dietary fiber, minerals and vitamins including beta-carotene and niacin. Here’s holistic nutritionist, Jennie Miremadi’s incredible summer dessert recipe using lucuma as a key ingredient…

This gluten-free vegan crumble recipe was originally part of a summer picnic menu that was published in The Chalkboard two years ago. It has become one of my favorite desserts in large part because I love cherry, lucuma, and almond together — the combination is superb!

If you’ve never tried lucuma, you’re in for a treat. The fruit is native to Peru, although in the U.S. you’ll typically find it in dried and powdered form. It’s flavor is a bit like butterscotch which makes it a delicious and decadent addition to so many desserts. Lucuma is also full of health benefits, like being rich in fiber, packed with vitamin C, and loaded with antioxidants called polyphenols. (We know that diets that are rich in polyphenols may help protect against heart disease, cancer, diabetes and neurodegenerative diseases).

Since this recipe was originally published, I’ve made one tweak to it. I’ve found that maple sugar and lucuma are a beautiful compliment for each other, so I’ve substituted maple sugar for the coconut sugar used in the original recipe.

Add cherries, water, lucuma, almond extract and honey to a saucepan and heat over medium heat, stirring frequently for approximately 7-10 minutes, or until liquid from the cherries is released in the saucepan and has come to a boil.

Once cherry liquid is boiling, reduce heat to low. Remove 2 tablespoons of cherry liquid from the saucepan and mix with 1 teaspoon of arrow root powder in a small bowl until arrowroot powder is completely dissolved.

Add cherry-arrowroot mixture back into the saucepan with the cherries and cook over low heat, stirring frequently and making sure that the cherry liquid does not come to a boil.

When cherry liquid is thick and coats the back of a spoon, turn off heat.

Divide cherry mixture evenly among four 8 ounce mason jars and allow to cool until mixture is warm but no longer hot.

Top each cherry jar with 3 heaping tablespoons of crumble.

Serve cherry jars either warm or at room temperature and enjoy!

Transfer crumble to a parchment-lined baking sheet and bake for approximately 12-15 minutes or until crumble is fragrant and lightly golden.

Remove from oven and set aside for use with cherry jars.