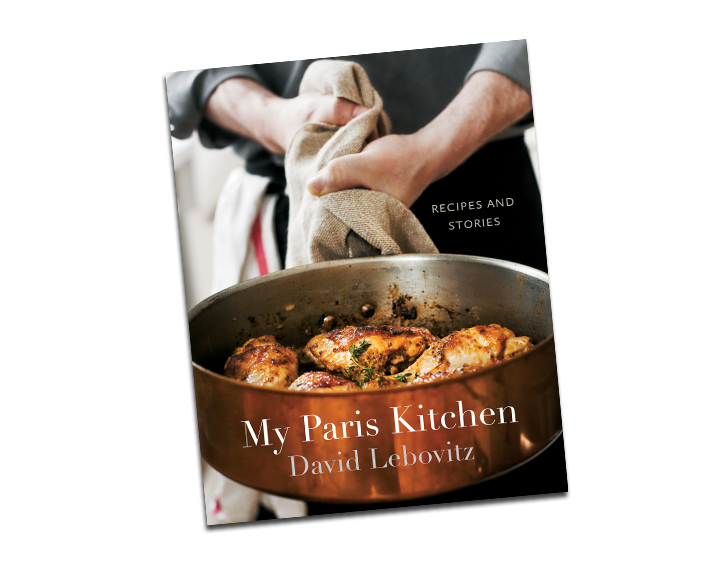 Le sigh, the modern cookbook. Filled with aspirational photography, essays, tips and lifestyle inspiration, many modern-day cookbooks transcends the definition of their older, index-like counterparts. No longer cut and dry lists of recipes, cookbooks like My Paris Kitchen: Recipes and Stories

unfurl the possibility of an entire lifestyle, this one a delicious waft of modern-day Parisian living. David Lebovitz’s guide to cooking the old French classics in a modern way makes us feel like we could belong among the farmer’s market-traipsing home cooks on today’s Paris streets.

This recipe for Butternut Squash Bread Soup is the perfect tell for what you’ll find inside this wonderful new book: classic, yet modern; hearty, but fresh. Prepare to be knocked off your feet by Lebovitz’s wonderful, edible tour of modern French life – just remember to set the oven timer before getting lost in it’s pages.

I get a kick out of telling French friends about all the French-style products that one sees in America, ranging from French-cut green beans (when I’ve asked, no one in France has any idea what “French­ cut” means) to a French-style refrigerator, a behemoth that looks nothing like the modest-size refrigerators you see in France.

When I first served this panade at a dinner party, none of my Parisian friends had ever heard of the dish either. In fact, they told me that panade refers to someone who finds himself in a bad situation; they weren’t aware of the baked casserole that’s served like soup but is hearty enough to be a full meal.

This panade is one of the few dishes I’ve eaten in my life that I’ve never forgotten. I was baking one night in the kitchen at Chez Panisse and was so busy that I barely had time to enjoy all the won­derful food that I watched the cooks send out to the guests. Seeing my rapt interest, cook Seen Lippert offered me a warm bowl of panade: slices of toasted sourdough bread soaked in flavorful broth with lots of fresh herbs and layers of hearty butternut squash holding everything together. I took one spoonful and had to stop what I was doing and sit down to savor it. (Belated apologies to the customers who had to wait a little longer for their dessert that night.)

Seen has since left the restaurant business, which is unfortunate for the diners, but very good for her husband. Yet she was happy to share her recipe for panade, which is one of those dishes that gets better as it sits, and is even better rewarmed the next day.

For baking the dish, a 4-quart baking dish is preferred, because the greater the width, the more crusty cheese topping you’ll have when the panade is finished. Whatever size baking dish you use, it should have sides that are at least 3 inches high.

For the bread, find a sturdy, tangy sourdough loaf that’s quite dense. Depending on the size of your dish, you may need a little more or a little less bread, so you might want to have extra bread on hand. (Never a problem in France!) Sturdy rye bread will also work well, if sourdough loaves aren’t available.

This is one of those dishes where the quality of the chicken stock is very important, so I urge you to use homemade. Although this is called a “soup,” it’s more like a very moist casserole. As you serve, ladle additional warm broth over each bowl if you wish.

Melt the butter with the olive oil in a wide skillet or Dutch oven over medium heat. Add the onions, the 2 cloves of sliced garlic, and 1 teaspoon of the herbs. Cook for about 35 minutes, stirring occasionally, until the onions are completely wilted and beginning to brown on the bottom and edges.

While the onions are cooking, preheat the oven to 375 F. Put the slices of bread on baking sheets in a single layer and toast in the oven, turning the slices over midway, until both sides are dry, 10 to 12 minutes. Remove from the oven and when cool enough to handle, rub both sides of the slices with the whole garlic cloves.

To assemble the panade, cover the bottom of a 3- to 4-quart baking dish with a layer of bread, breaking any pieces so they fit in a single later, but keeping them as large as possible. Ladle about half of the onions and some of the stock over the bread, and then cover with half of the squash slices. Season lightly with salt, pepper, and half of the herbs. Sprinkle with 1/2 cup of the grated cheese. Add a second layer of bread and ladle the rest of the onions and more stock over the bread. Cover with the remaining squash slices. Season the squash with salt and pepper, and then add the remaining herbs. Sprinkle another 1/2 cup of grated cheese over the squash layer. Cover the squash with a final layer of bread and then ladle the rest of the stock over the bread and press down on the ingredients to encourage them to meld together. Top with the remaining 1 cup of grated cheese, and the Parmesan.

Cover the baking dish with aluminum foil and tighten it around the edges, but don’t press it down on the surface or some of the cheese may stick to it during baking. Set the baking dish on a foil-lined baking sheet to catch any spills. Bake for 45 minutes, uncover the panade, and bake for another 30 minutes, or until the panade is very well browned and crisp on top. Let cool for about 15 minutes and then spoon portions of the panade into soup bowls, making sure everyone gets a highly prized layer of the crusty topping. Ladle additional stock around the bowls of panade, if you wish, and serve.

Reprinted with permission from My Paris Kitchen