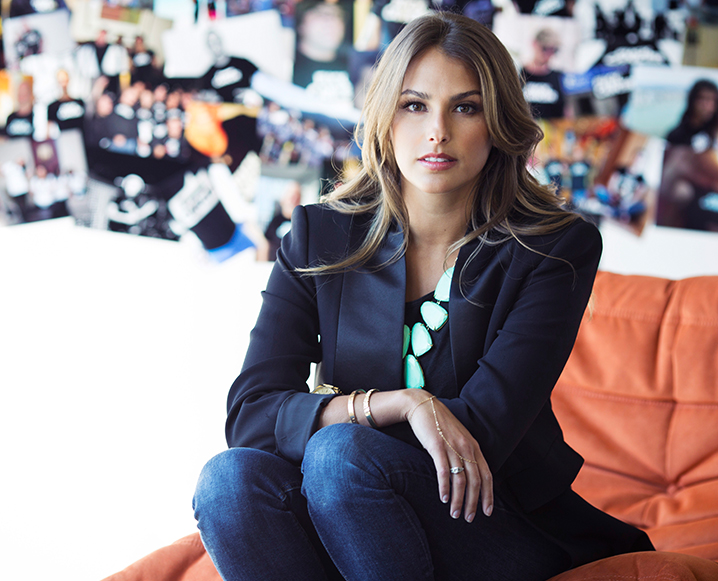 Fuck cancer. Those are fighting words that we're happy to share all month long in support of our November Guest Editor's organization of the same name...

Fuck cancer. Those are fighting words. And words we’re happy to share all month long in support of our November Guest Editor’s worthwhile efforts to support the early detection of cancer through her organization of the same name.

Five years ago, when Yael Cohen Braun was still Yael Cohen (she recently married mega-music manager Scooter Braun who reps Justin Bieber, Ariana Grande & Martin Garrix, among others.) her mother contracted breast cancer. Like so many family members, especially those of the Chalkboard tribe, Yael went into go-mode – researching everything she could and supporting her mom’s treatment and recovery from every angle. In a move that only a daughter can make, Yael had a shirt made for her mother – one that she intended for her to wear only at home. It read “FCancer” and symbolized their family’s attitude toward fighting the disease full-on. To Yael’s surprise, her mother rocked that T-shirt all around town and – as you can only imagine – encountered enthusiastic support everywhere she went!

Yael’s mother survived her fight with cancer because of early detection. After her mom’s own experience and witnessing the powerful reaction people had to her viral T-shirt message, Yael decided to keep on with the message for families everywhere. With the same powerful, proactive stance that the phrase denotes, FCancer is helping people around the globe to detect cancer at it’s earliest stages – stages in which cancer can be fought much more successfully.

Just recently, FCancer merged with F*ck Cancer – if you can believe it, an organization also started by a daughter who wanted to honor her mother’s legacy, Julie Greenbaum. As these two women and their organizations team up, there’s no telling what they’ll accomplish in the fight against cancer and in support of young people everywhere who’ve been affected by the disease.

We love this organization and we’ll be talking with Yael all month long about how she keeps this crazy life in balance, tips for staying healthy as a care-giver, and her own personal health habits and routines. Read her letter below then pop on over to StandWith, her newly launched mobile app that allows communication and collaboration between caregivers and supporters to better assist loved ones during long-term medical treatment. Here’s Yael…

It’s really exciting to get to spend a month with you guys and guest host.

The timing is pretty great actually because I’ve had to spend some time lately thinking about and reevaluating my thoughts and beliefs on health. In large part (actually entirely) because I’m now thinking about health for me and the little person growing in my belly. It’s crazy how radically and quickly pregnancy changes how you think of everything!

Workouts I used to think were the only way to exercise aren’t all that appealing all of a sudden. Foods I didn’t think twice about binging on have quickly become a solid pass in my book. But mostly, I just want to know exactly what I’m putting into and onto my body and what that means for me and my ever-growing belly. I think this is making me a smarter health consumer because I’m interested in the long win not just the quick one.

With this in mind, I’m constantly looking at ingredients in foods and beauty products, I’m asking ‘why’ a lot more and I’m never embarrassed to ask for exactly what I want – I hope these are things that stay with me when my waistline returns to a size that allows me to bend over.

As you’ll learn this month, I’m all about balance. When I’m killing myself trying to be perfect, I’m generally miserable (and that’s also usually when my eating terrifies Girl Scouts and ice cream vendors alike), but when I’m focused on the long run – on making good decisions most of the time and making the fun decision every once in a while – that’s when I kill it in the health game.

So this month, let’s focus on being balanced and happy. Let’s focus on enjoying the process, not just the end result. Let’s focus on making decisions that we won’t look back on in five years and shake our heads (unless we’re shaking them with emphasis, ‘cause we were so damn rad, obviously).

With love and balance (as much balance as a preggers chick with size 4 feet can have),