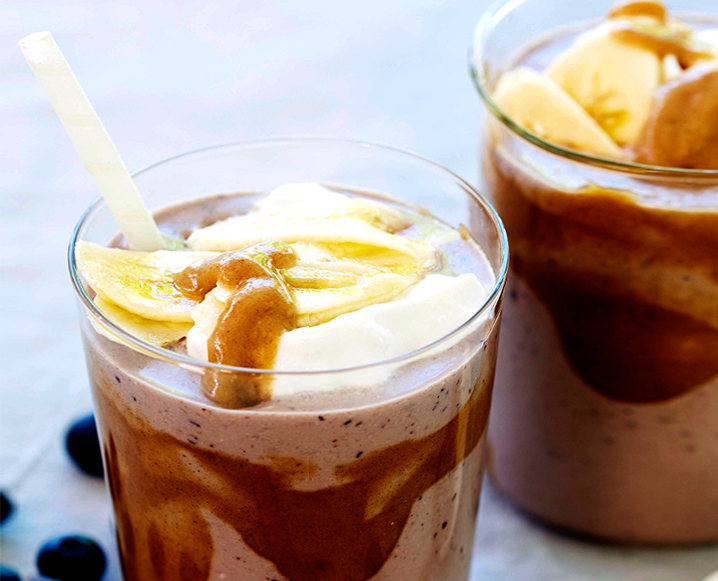 ← →
|
Suzanne Hall
,
Photo credit: Inspired
Food and Nutrition, Healthy Recipes, Wellness Experts
Thursday, we gave you a look at a day in the life of Lorna Jane Clarkson (a.k.a. the actual Lorna Jane irl). What we didn’t tell you is that we were holding on to this smoothie recipe from Lorna’s new book Inspired – and unsure if the world was ready for this level of goodness.
This smoothie recipe includes almond butter, coconut cream, blueberries, and a crazy raw toffee sauce – and we’re wondering if we’ll ever crave a junk food milkshake again. Try this toffee smoothie immediately. Lorna recommends it for pre-workout fuel!

For the toffee sauce:
Blend all ingredients together until a sauce forms. If not thick enough, add more dates. The sauce will need to be thick to be drizzled around the jar/glass.

For the smoothie:
Blend all ingredients together in a high-speed blender until combined.

For topping:
Chill coconut cream can in the fridge overnight. The next day, remove the can from the fridge without tipping or shaking and remove the lid. Scrape out the top of thickened cream and leave the liquid behind (reserve for use in other smoothies). Chill a large mixing bowl 10 minutes before whipping. Place cream in chilled mixing bowl. Beat with a mixer until it reaches whipped cream consistency.

To assemble:
Drizzle a little of the toffee sauce around a glass. Add smoothie, leaving an inch of space at the top. Top smoothie with whipped coconut cream topping, extra banana pieces and another drizzle of toffee sauce.

From INSPIRED by Lorna Jane Clarkson. Copywright 2015 Lorna Jane. Reprinted with permission by The Narrative Group and Lorna Jane.