How To Use Celestite Crystals To Get A Soothing Night's Rest

We’ve learned so much about crystals from pro crystal healer, author, and founder of Energy Muse, Heather Askinosie — this epic guide gives you the gist. Over the next year, we’ll be profiling some of our favorite stones, exploring where they’re from, what they mean, and how to use them. First up:  stabilizing and soothing celestite…

What You Should Know: Celestite got its name from the Latin word meaning heavenly, and it’s certainly got the vibes to match. This pale blue crystal is an essential stone for making sure you get a restful night’s sleep. Even those who are super sensitive can comfortably soak in the energy of celestite without getting overwhelmed.

Its gentle energy is soft enough for everyone to enjoy. If your kids have trouble turning off at the end of the day, celestite is the remedy you need to soothe that mental chaos. Nightmares, fear and anxieties are often what keep children awake — and the same issues keep adults awake too. Ease every mind in your home by tapping into the energy of celestite instead of tapping into the energy of fear. 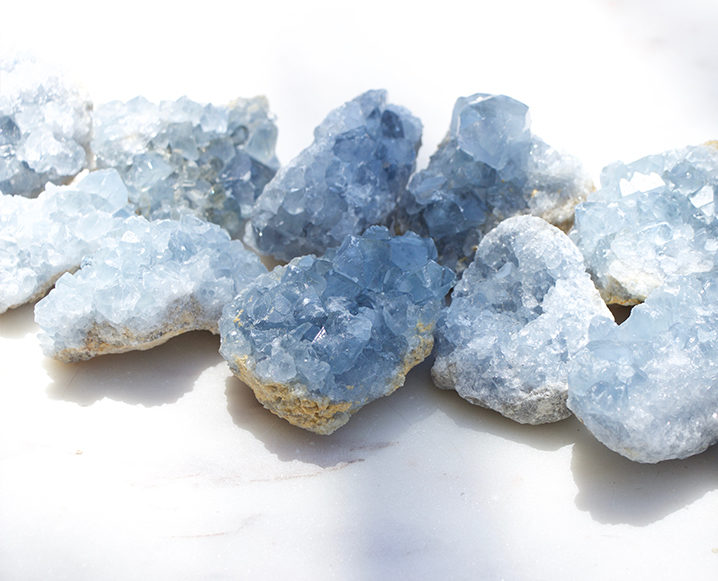 How It Heals: Celestite links with the throat, third eye and crown chakras to encourage major stress relief. When we hold in feelings of resentment, guilt or disappointment, it can leave us tossing and turning at the end of the night, unable to think of anything else. That energy builds up and creates a block in the throat chakra. So instead of your energy flowing into dreamland, it gets stuck on all the unexpressed tensions within your throat chakra. Release the strain those feelings place on your mind and heart by connecting to the detoxifying energy of celestite.

With this stone, you allow yourself to forgive the feelings that have accumulated, and let go of the energy that no longer serves you. You’re connecting to celestite healing properties with the intention of separating from the desire to engage in negative emotions. In the same way, you can use celestite to heal the anxieties that are plaguing your third eye and crown chakras. If constant stress is keeping you up, refocus the mind toward a healthier perspective. Celestite energy has been known to usher in alignment, and get your mind, body and spirit back into a positive framework. By helping to alleviate mental chaos, celestite will bring the clarity of mind you need to not only sleep but also wake up ready to tackle your obstacles.

Where To Keep It: Keep celestite on your bedside table, so you can connect with its soothing energy all night long. 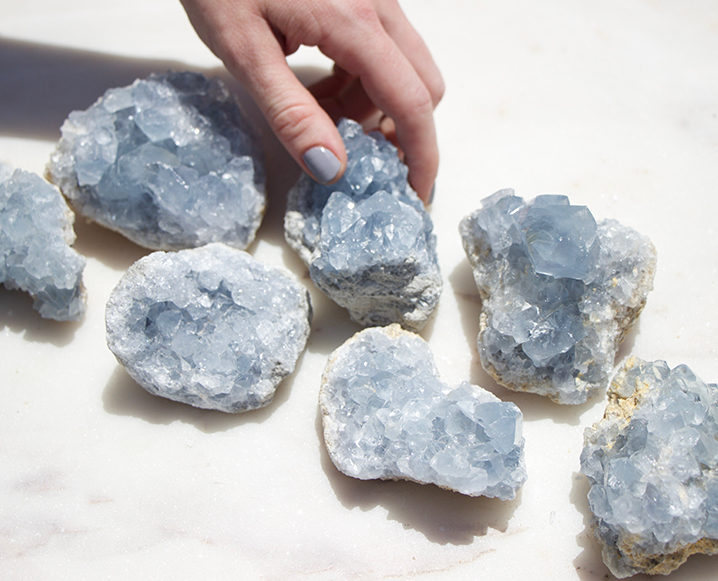 How To Use It: Before sleep, take your celestite crystal, a pen and a piece of paper and move to a peaceful area of your home. Sit with your celestite in your hands, allowing yourself to sync with its healing energy. Then grab your paper and pen, and write down an affirmation for sleep. This will differ from person to person, because what’s keeping one person awake, may not be what’s causing pre-sleep tension for someone else. So, while still holding your celestite crystal, get acquainted with what’s holding you back from relaxing your mind. Then write down an affirmation to conquer that block. Such an affirmation might be: I am relaxed, at peace, and ready to recharge my mind, body and spirit in the positivity that surrounds me.

Take that piece of paper and set it down on your nightstand. Then place the celestite on top of it. Put both of your hands over the celestite crystal, and repeat your positive sleep affirmation out loud.

Which crystal do you need right now and why? Take this quiz to find out.