His And Hers: Healthy Spaghetti Amatriciana Two Ways 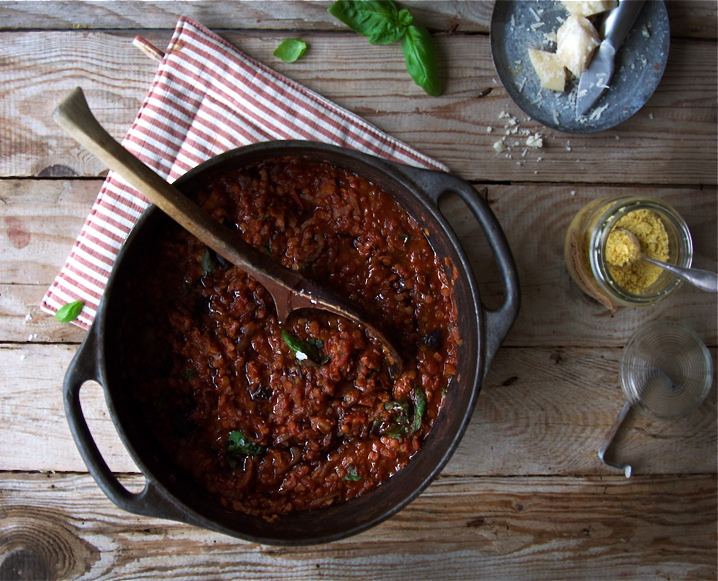 You’ve Officially hopped on the healthy living train and you’re going full-speed. You have developed an affinity for green juice, quinoa bowls fill your days, and you’ve pretty much named yourself the ambassador of all things kale. Your love affair with your body and your health is blossoming, so it’s only natural to want to get your other relationship in on the action: the one with your significant other.  But if you’re anything like us, finding common ground in the kitchen is sometimes easier said than done!

Dedicated to discover a recipe built for two, we turned to health foodie guru Elenore from Earthsprout. We asked Elenore for a flexible recipe that makes both him and her happy. Not only did she surprise us with her ingenuity, but she also managed to take a less-than-healthy comfort food – spaghetti – and transform it into a nutritional powerhouse, two ways. While both versions boast a delicious Amatriciana sauce made of hearty lentils, ancho peppers and dried mushrooms, Elenore provides two options for the base and cheese: one completely raw, one simply gluten-free. No matter your dietary preferences, this Italian-inspired meal hits the spot – and allows both you and your other half to indulge in the same delicious dish together without scrambling for a “second option” come dinnertime. Take a cue from Elenore and her hubby Fabian by whipping up a batch tonight…

If you find Fabian making dinner in our house, there is a high probability he’s preparing this sensational yet simple tomato sauce (he’s famous for making outrageously tasty tomato sauce, hummus and some other signature dishes). An original amatriciana sauce calls for pork, but our recipe uses other rich ingredients like dried mushrooms, red lentils and sun-dried tomatoes. We’ve developed this vegan amatriciana sauce recipe over the years and it never fails. It’s our go-to when we’re tired and don’t feel like being inventive or hanging out in the kitchen for hours. A central dish like this one also makes it easier to his-and-hers-ify the additions around it. Fabian is a die-hard spaghetti lover while I’d much rather go for a raw veggie spaghetti. I also leave the Parmesan cheese to him and enjoy a good rawmesan instead. So here it is, the perfect recipe for you and your honey to share. Bon appetit!

Vegan Amatriciana Sauce
1. In a large saucepan (preferably cast-iron), heat ghee or virgin coconut oil on low heat. Add the crushed chili flakes and the halved ancho pepper and let steep as the oil warms up. When the oil is hot, add the garlic and let fry for 1-2 minutes, then add the onion and cook until translucent.

2. Add all ingredients for the sauce except the olive oil and the fresh rosemary and thyme. Let cook on low-medium heat with lid on for 1 hour. Stir 2-3 times only to make sure that the lentils have enough water to cook. Basically you can just leave the sauce to cook while you have fun crazy dancing and preparing the spaghetti and other additions.

3. Add olive oil and the fresh thyme and rosemary leaves during the 5 last minutes of cooking.

Rawmesan
Crush the pine nuts in a mortar, add nutritional yeast and salt towards the end. Rawmesan stores well in the fridge for a couple of weeks and makes any salad, soup or delicious meal even more attractive.

Celeriac Spaghetti
Rinse and peel celeriac and easily turn it into spaghetti by using a sprializer or simply a potato peeler/ julienne peeler. Add turmeric and olive oil and toss until coated.

Assemblage
Top the chosen spaghetti (gluten-free or celeriac) with the amatriciana sauce. Then add olives, green salad and sprinkle with either the parmesan or rawmesan depending on your tastes.