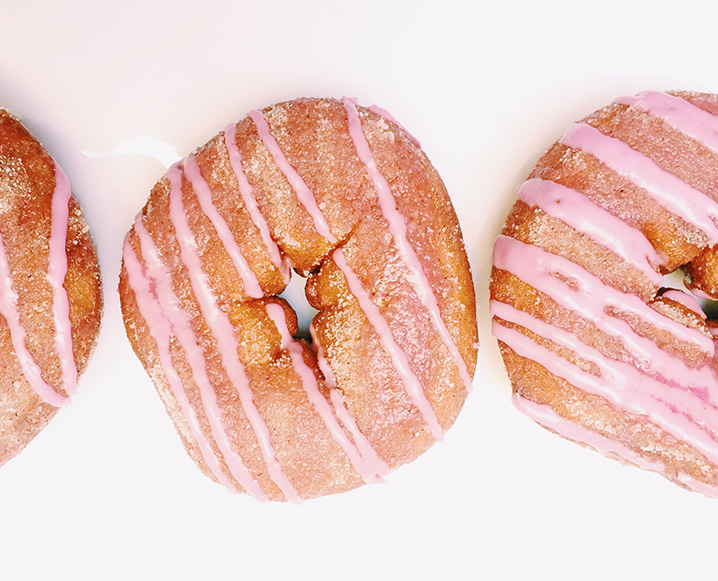 “A donut a day keeps the doctor away”…is something we never thought we’d ever say. But then Monique Otero of Brunchpants (remember her breakfast cupcakes?) presented us with these gluten-free donuts filled to the brim with the season’s freshly picked apples. NYC’s farmer’s markets are booming this time of year, and we’ve enlisted Monique to fill us in on the local New York farms – and their produce!) – that make these markets shine. Props to the family-owned fruit and veggie farm that inspired this gluten-free donut recipe that makes us feel a whole lot better about satisfying our sweet tooth first thing in the AM…

I have an ongoing love affair with apples, and one of the best places to find them in New York City this time of year is Migliorelli. This family-run fruit and vegetable farm originates from 1933 in the Hudon Valley. They specialize in over 130 different varieties of fruits and vegetables and sell in every major farmers market in New York City. Migliorelli’s philosophy is to only sell produce that is less than 24-hours young. You can find their schedule here.

“An apple a day” is not an old wive’s tale. Apples are a great source for antioxidants, vitamin C and fiber, helping you boost immunity and overall health. I like to use apple sauce in baking to reduce the amount of oil and butter I use. These gluten-free donuts call for apple sauce to increase the fiber content and beet juice to create the perfect shade of pink frosting.

In a separate large mixing bowl, use a hand or stand mixer to whip together butter and coconut sugar until cream and fluffy.

Mix in eggs, one at a time, into the butter mixture, until well combined.

Slowly add the dry ingredients to the butter mixture until well blended.

Pour the batter into a gallon-size freezer bag.

Snip off a small corner of the freezer bag, creating a piping bag that will help you easily squeeze the batter into a donut pan.

Bake for about 18 minutes or until a knife or toothpick inserted comes out clean. (Note – timing will depend on the size of your donut pan.)

Allow the donuts to cool slightly before you add the topping.

Whisk the beet juice, water and powdered sugar until smooth, forming a thick glaze. Set aside.

Optional: Take 2 tablespoons of the pink powdered sugar glaze and water it down with an additional teaspoon of beet juice. You can put this brighter pink watery glaze on the donuts first if you would like 2 pink colors to show up. Using a spoon, drip the glaze over the donuts in a zig zag pattern. Note that the watery glaze will be mostly soaked up by the donuts.

Take the pink powdered sugar glaze and place in a quart-size Ziploc bag.

Snip a tiny corner off of the Ziploc bag and pipe the sugar glaze in a stripe pattern on the donuts.