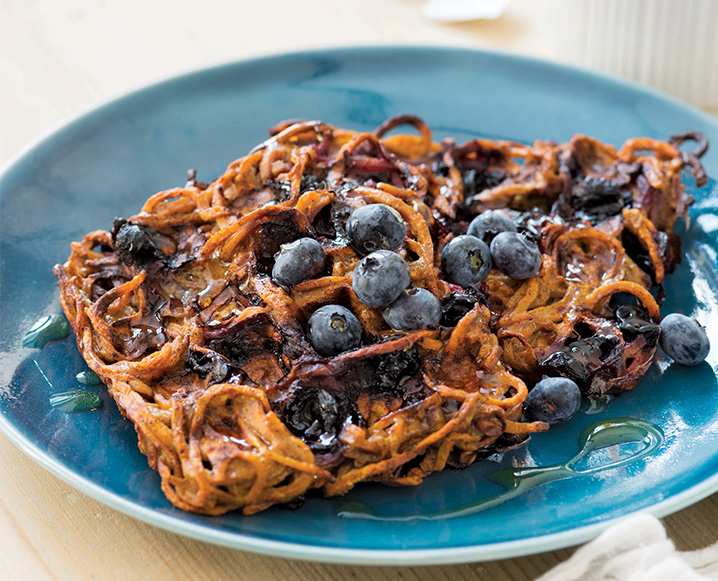 It’s the summer of the spiralizer! We’re coo-coo for this kitchen equipment and really dialing in on a few of our favorite uses for it. These spiralized sweet potato hashbrowns are actually waffles, but we think they could go either way. Make this cozy recipe from the cookbook Inspiralized your excuse to break out your spiralizer, then keep the equipment out on the counter for a perfect zuchhini noodle dinner.


These waffles are as clean eating as it gets. When you take your first bite, you will taste the plump blueberries, spicy cinnamon and soft sweet potato. Instead of using flour, sugar and butter — or, worse, something frozen in a box — try this recipe. While they don’t have the fluffiness of traditional waffles, they do offer an interesting texture, and the natural sugar in the sweet potatoes gives them a special sweetness. With warmed blueberries and maple syrup to accompany, these waffles are sure to become a brunch favorite.

Preheat a waffle iron. Place the sweet potato noodles in a bowl and toss with the cinnamon.

Place a large skillet over medium heat and coat with cooking spray. When water flicked onto the skillet sizzles, add the seasoned sweet potato noodles and cover. Cook for 5 to 7 minutes or until the noodles have completely softened.

Transfer the noodles to a large bowl and add the egg, vanilla, and blueberries. Toss gently to combine until the noodles are coated, taking care not to break them.

Coat the waffle iron with cooking spray and carefully pour in half of the noodle mixture, taking care to fill all the cavities with noodles. Cook the waffle following the manufacturer’s instructions.

When the waffle is done, transfer to a plate and keep warm while you make the second waffle.

Drizzle a bit of maple syrup over each and serve.