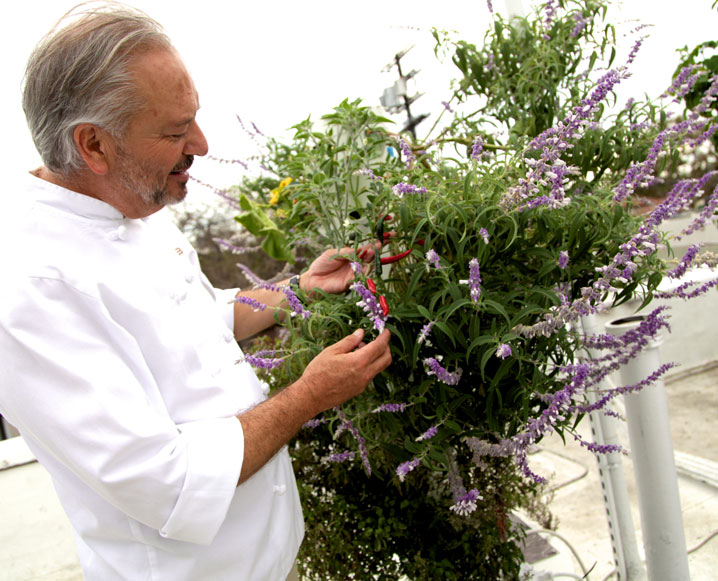 We all dream of uncovering a secret garden, unexpectedly stumbling across a hidden wonderland of verdant loveliness that is hidden away from the rest of city. So when we unintentionally discovered an out-of-the-way kitchen garden oasis hidden under (or rather, over) our noses smack-dab in the middle of LA, you can only imagine our delight.

The aforementioned secret garden happens to be on the rooftop of Playa, one of West Hollywood’s top restaurants that has been serving up delicious Urban Latin delicacies since Chef John Seldar (of Rivera), Bill Chait and Aileen Getty opened it up a little over a year and a half ago.

Unless you know where to look, it would be easy to miss it. You can’t get there unless a staff member takes you through the kitchen and up a precarious ladder. But once you’re there, you’ll never want to leave. We were lucky enough to visit it not once, but twice – first with the Chef de Cuisine Kevin Luzande, and a second time with the head chef and owner, Chef Sedlar.

There are a few things that distinguish Cielo Verdo from other rooftop gardens. First of all, there is absolutely no soil. The garden consists of 35 or so aeroponic towers from innovative company Future Growing. These have their own irrigation system that go off every 7 minutes to ensure the plants are constantly watered without wasting H2O. And because there’s no soil, there are no pests, no weeding and not a whole lot of getting dirty. Though the garden has been functional since March, we visited during the end of August and the beginning of September, which meant there was still a bumper crop of summer veggies including cucumbers, peppers and even corn.

In addition to kale, peppers and micro greens, they also grow a selection of herbs and veggies that are indigenous to Mexico and very hard to procure in Los Angeles, which they use to make their delicious cocktails, appetizers, main courses and even desserts. Playa and Chef Sedlar are truly pushing the boundaries of what it means to eat hyper-locally with Cielo Verde. Forget just eating foods grown within one hundred miles – try just a few steps away, at a restaurant that happens to be situated in a top-notch location on a bustling Beverly Boulevard. It was such a revelation, we couldn’t help but share this secret garden with everyone who is eager to learn more about urban farming. We highly recommend you check it out for yourself and see this amazing time-lapsed video that shows the development of the garden from installment to fruition—it’s a beautiful example of how to one restaurant is innovating the locavore movement to create the tastiest, most inspiring results!

We’ll be bringing you more tasty recipes for cocktails and dishes from Cielo Verde visionary and chef-owner John Sedlar, plus an exclusive Q+A, but until then make sure you see all the photos of our lovely rooftop garden visit.