Breaking Out Of Resolutions 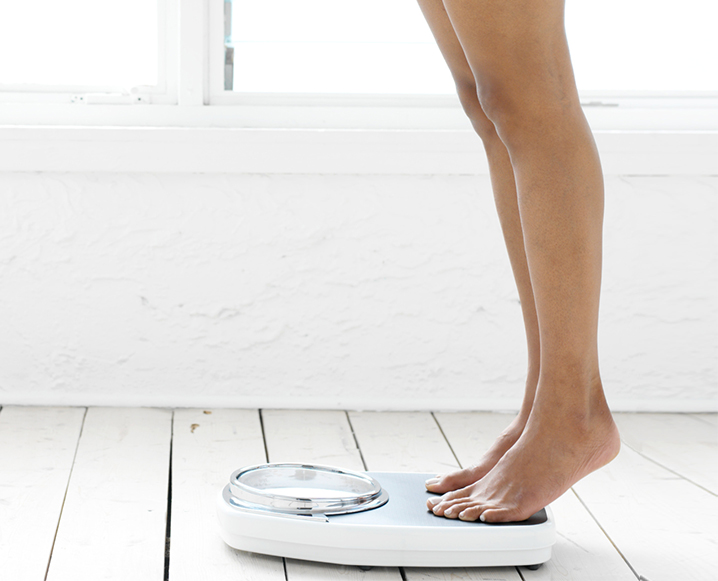 I’m sitting at the doctor’s office and I’m terrified to go in.

On a routine visit to a brand-new health practitioner, highly recommended by a friend, I find myself sitting in the eggshell-white waiting room filling out my paperwork and trying to keep from fidgeting. The receptionist is as sweet as can be, the vibe calm and friendly, and the multicolored bowl of lollipops sitting on the counter reminding me of my childhood – back when I loved going to the doctor and I was self-aware in the best way possible.

The fidgety anxiety is not about a condition, not about a vibe – heck, it’s not even about the needles. Even though I’m loving how I feel in my own skin, even though I am healthy and happy as can be, the reason my stomach won’t stop flip-flopping is because…I’m going to have to step on the scale.

It’s officially the end of what I like to call Resolution Season: that time of year people start to slowly forget their workouts, loosen their wallets,  leave their closets in disarray – the time of year we generally start to “slip up.” While most people simply assume this is due to lack of interest or motivation, I argue that what sends us spiraling is not the act itself – it’s the idea of what it should be. The idea that there is some omnipresent right, some all-powerful magic number, some goal that could be gone in the blink of an eye or glance at a figure. Our ties to the safe and solid endpoint are what really get us. And so the very second we veer from the path – well, it’s almost like those long-standing family arguments that never end up getting resolved. Both parties have been betrayed by their definitions of what love should be, what relationships should be like. God forbid they’re nuanced. God forbid sometimes we just don’t get along. We wind up tightly and twist into knots, again and again, until one day we don’t even know where the untangling would begin.

I used to be double-knot-tied to my weight and that fluctuation on the scale – a memory that was triggered when I stepped into the doctor’s office that day and started to get upset at the fact that I remembered what it was like to get upset at a number. I used to be diligent about counting my calories, logging my workouts, making sure that I stayed within that self-defined coveted range between too much and not enough. Thank goodness for that self-awareness I cultivated as a kid, because one day, all of a sudden, I just got…tired. It got exhausting, and I realized that by trying to avoid that place in which my body dictated my happiness – by working so hard to cling so tight to the idea of freedom, the definition of what it would look like to love myself – I was holding myself captive and completely missing how happy the body I was in could actually make me feel, right in that very second.

We do the same thing with money, with exercise, with kindness even. Holding ourselves to a standard of perfection – even if it’s a standard we’ve defined for ourselves. Isn’t that all resolutions are, really? Attempts to alter the definitions we’ve fallen into in the past? We define our resolutions at the beginning of the year, sometimes merely settling on a endpoint, sometimes going so far as to meticulously plan every step of the way for seemingly less-than-friendly navigation. We hang onto ideas of what things should be, so if and when they start to look different, we automatically associate them with failure.

Different is never failure. It’s just…different. Resolving to eat clean and then “cheating” on veggies with your main men, Ben & Jerry, one night is not a failure. Snapping at your coworker or best friend or child when you promised to be nicer this year is not a failure. Missing a day or two or even three (gasp!) of the gym, or logging a lackluster workout, or “accidentally” spending more than you should on those shoes (and shirt, and jeans, and trendy ear cuffs) is not anywhere near a failure. It’s become our default reaction to say we’ll get back on the wagon, but what if we got rid of the wagon altogether? What if we realized that what truly makes us happy is fluid and constantly in flux?

As you move out of Resolution Season and into the rest of your life in 2014, I encourage you to remind yourself what it is about whatever you are doing that makes you feel fulfilled and happy. If your current definition and strategy is not accomplishing those things, then maybe it’s time to give yourself a break. There will always be moments of the unexpected. Everything is a learning experience, everything is a building block, but sometimes we just don’t utilize them as such. When we stop defining what happiness, success, health or virtue must look like, we actually allow ourselves room to experience and find what is true to who we are – not who we think we should be.

As for the doctor’s office?

The nurse practitioner called me in – a woman close to my age, with beached-blonde hair and an energy that was equivalent to a walking giggle. We chatted about her day, where she was from, bonded over our love for spin classes – and just like that, I was on that platform. And I realized, man do I feel fantastic. I was scared those old definitions and feelings would magically reappear, those ones that told me that trying a new cleanse or supplement or cutting out a food group forever was the road to the weight that was what happy must look like. They didn’t. How could they? I threw away definitions long ago, when I realized that the body and soul I admired most coincided with numbers that fluctuated daily and decisions that didn’t always exist in the rulebook, but sure made me the person I’d always hoped I would become. The number popped up, far from my “safe” zone back in the day, but right where I knew I needed and should be in that very moment. And, as if to challenge me, a mathematically intended yet emotionally-loaded word popped up next to the number.

I smiled at the nurse and the irony. “I think your scale needs to watch its mouth.”

All we could do was laugh. I happily grabbed a lollipop on my way out.