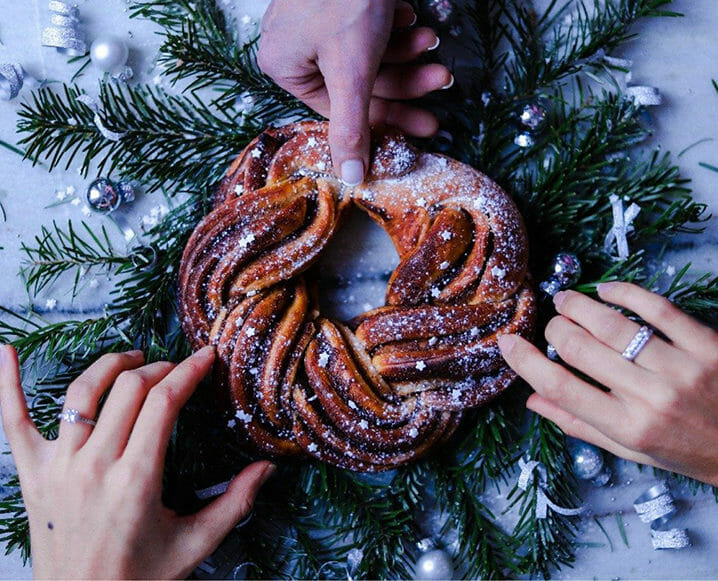 Hannah of Two Spoons is on a mission to bring more plant-based recipes to the masses. Whether you’re strictly vegan or just looking to incorporate more plants into your diet, her recipes are accessible, delicious and fun.

This recipe for vegan cinnamon rolls is so adorable we could barely resist making them right away. The key? A good vegan butter. Hannah’s favorite is MIYOKO’s and we agree since its base is coconut and cashew, rather than canola oil. 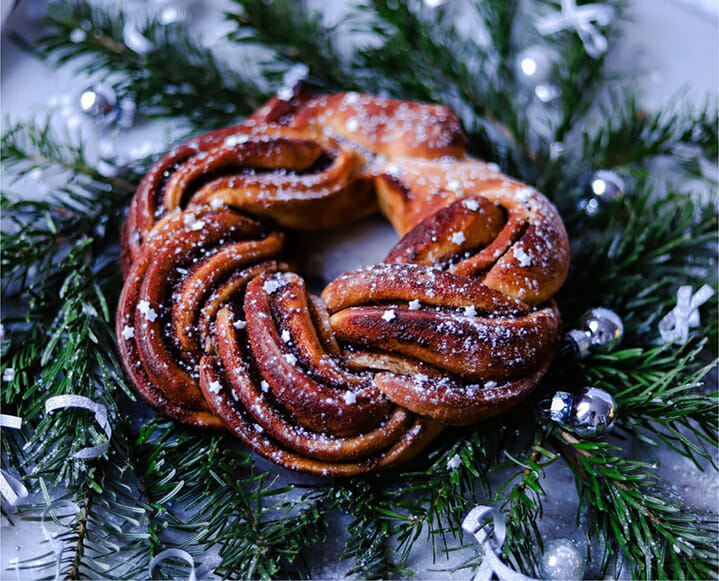 INSTRUCTIONS
In a small bowl add warm water. Stir in coconut sugar until mostly dissolved. Then add yeast and stir. Set aside for about 7 minutes, or until yeast is dissolved and liquid mixture creates foamy bubbles on top.
(If bubbles do not form, toss and try again. Water should be warm but not boiling or it will kill the yeast).

Pour wet mixture over your flour and stir with a large wooden spoon. Mix until combined and resembling batter consistency. Then add remaining 3/4 cups flour. Mix together.

Knead mixture until it comes together in a shaggy and sticky dough. Flour work surface and place dough on top. Knead the dough, adding small handfuls of flour as needed, until it’s no longer sticky to the touch, approx. 3-4 minutes. The dough should be smooth and elastic. (Don’t be afraid to add lots more flour. Adding 1/2 cup to 3/4 cups while kneading is normal). When dough is no longer sticky to the touch, shape it into a big ball.

Wash mixing bowl and dry it. Lightly oil the bowl with 1 tbsp neutral oil (or melted vegan butter) and place dough inside. Flip the dough around so it gets lightly coated in the oil. Then, tightly cover the bowl with bees wrap and place in a draft-free area. Let the dough rise for at least 1 hour. (It should almost double in size).

When dough has risen, divide it into 2 equal portions (to make 2 dough balls). Place on a clean work surface to the side.

Preheat oven to 400F (200C). On a floured work surface, taking one dough ball at at a time, roll the dough into a rectangle as best you can, about 1/8 inch thick. Don’t worry if it’s not a perfect rectangle, my edges were wiggly.

Lather cinnamon filling over dough in an even layer, leaving a clean 1/2-inch border around the edges. Then roll the dough away from you to form a log.

Rotate log so that the end side is nearest you and using a sharp knife, cut the log in half vertically (from top to bottom) leaving about 1/2 inch at the top uncut.

Start braiding the two pieces, one over the other, trying to keep the open layers exposed so the cut side remains on top (this is what makes this braid effect). When you’ve braided the entire log pinch the ends together, and form a circular wreath. Gently transfer braided cinnamon wreath to a baking sheet lined with parchment paper.

Rolling out your second dough ball, and continue steps for lathering with cinnamon filling, rolling, slicing and braiding. Forming a wreath. Place on same baking tray, ensuring there is at least 2-3 inches between both wreaths. They will expand as they cook. (If you have remaining cinnamon filling you can serve with cinnamon buns as a buttery spread)

Cinnamon bun wreaths can be frozen. Let cool completely, wrap well and freeze for up to two weeks. Let thaw completely before serving. Optional to pop in oven at 300C/150F for 15 minutes to warm.