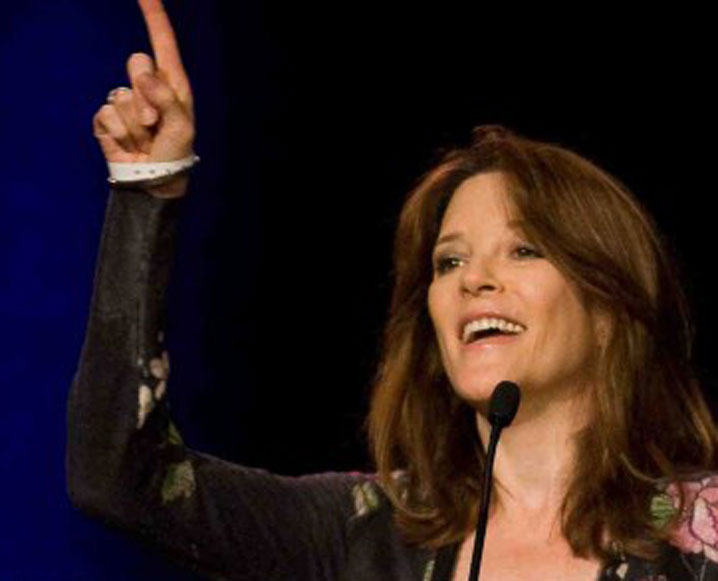 Back in 2014, we hosted prolific spiritual writer Marianne Williamson as our May Guest Editor, now running for President, get to know her a little better in this classic interiew…

Our friends at Spirituality + Health magazine recently sat down with author and inspiration, Marianne Williamson. Twenty years after she introduced a new generation to A Course in Miracles in her bestselling book, A Return to Love, Marianne Williamson is still taking on the world—with a renewed call to political activism. Here is a peek in on the fascinating and passionate discussion with Marianne.


S&H: You were sort of like a poster child for the New Age, but you seem to have gone through a transformation over time. Is that fair to say?

Marianne Williamson: Not really. I wrote a book, published in 1998, called The Healing of America [about spiritually motivated activism], and I founded an organization called Project Angel Food, a meals-on-wheels program for homebound people with AIDS back in the ’80s. So I have always been very involved with social and political activism.

Many of us feel that our social and political activism is rooted in our spiritual principles. So for me it’s not really a transformation at all. I am pretty much who I have always been, but you know, other people see through whatever filters they would see.

So I have been filtering?

Even terms like New Age—it’s a caricature that marginalizes you, it’s a way to minimize you, it’s a way to imply your work is lightweight; you’re a fuzzy thinker. People who want to make sure that you are not considered a serious thinker are the ones who say that.

But your stuff is really serious and has changed people’s lives.

How do we reverse our “warrior nation” mentality?

What concerns me is how many young people are growing up never having experienced a time when the permanent war machine wasn’t happening. In my generation, the Vietnam War was on everybody’s lips. Today it’s just accepted that we are fighting a war somewhere. It’s not only morally obscene; it is unsustainable. We as a human race today are moving in a direction that is maladapted for the survival of our species because we fight too much.

And then you think of the 17,000 children on the planet who die of hunger every day, or the one billion people on this planet who live on less than a dollar and a quarter a day. And the increasingly unsustainable income gap, even in the United States. There has been a systematic dismantling of many of the guarantees of economic justice in the United States over the last few decades, almost like a vacuum cleaner just sucking up so many of the material resources of the country and putting them in the hands of a very few.

And what should we do about that?

I think the underlying cancer has to do with the dirty money in politics. So I think the great moral challenge for our generation is to establish total public funding for all federal political campaigns. We need to establish that corporations do not have the same rights a person has.

I’m also very eager to support women in running for office. I did this event [Sister Giant, a symposium to empower women to become candidates] in Los Angeles, November 10 and 11. It included issues of real conversation about the internal as well as external things which stop women, and most of the time it’s internal rather than external.

In Congress today, 16.8 percent of our representatives are women. What I hope is that maybe I can help make a difference with a conversation among women, particularly women who have a spiritual “personal growth and recovery” outlook, to think about running for office. That community is still not running candidates, and I think that will be the next step.

Is that because of apathy? And isn’t that the opposite of love: indifference?

You know, far more people on this earth love than hate. So what’s happening on the planet that we are in such trouble? The issue is that those who hate today hate with conviction. They hate with a perverse kind of courage. Hatred sees what it wants, will do anything to effectuate the worldview it reflects. We need to become as proactive and convicted behind love as some people are around greed and hate. We need to be willing to take the next step, even if it’s uncomfortable.

What scares me is that people aren’t even talking about the things that we should be talking about. That’s when you know they have really got to you, when nobody even bothers to even go there. As long as we are talking about corporate scams, it’s unbelievable to me the way the pharmaceutical industry is medicating America. They’ve said one-quarter of American women are on antidepressants today. This is not the time in history to mask your anxiety. We are anxious for a reason; we are depressed for a reason—because we know something is really not right here. The last thing you want to do is mask that. The last thing you want to be today is numb.

I can say what I do, but it’s not my job to tell other people what to do. The impulse that is necessary at this moment is not in the realm of doing but in the realm of being. It’s who we are that will determine what comes next, not just what we do. Gandhi said the end is inherent in the means.

How do you get to that place?

If I wake up in the morning and I say the prayer in A Course in Miracles—What would you help me do? Where would you have me go? What would you have me say and to whom?—whether your path is prayer or meditation, it’s a matter of surrendering very actively and asking that you be a vessel of love that day. When we live from that place, then we are set, we are guided, we are called to do things. It’s just right in front of us.

To continue reading this interview with Marianne continue on here to our friends at Spirituality + Health.