A Wilder Life: Inside The Beautiful Book + A DIY Macramé Planter 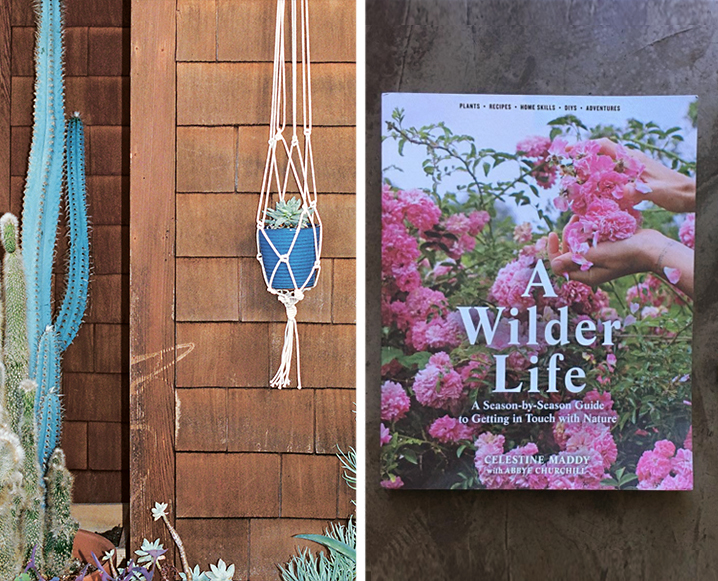 Suddenly in vogue, what was once considered a hippie trend or homemade decor our grandmothers might dig, macramé has made a serious comeback. The hippie chic trend doesn’t seem to be going anywhere any time soon and thanks to this DIY from inside A Wilder Life, we’re diving right in.

A Wilder Life is the beautiful new companion to the quarterly publication, Wilder – the dreamiest publication on garden and natural living out there. We consider founder, Celestine Maddy part of the Chalkboard tribe and are thrilled to introduce our readers to her endlessly inspiring new read. Enjoy this excerpt and this 70’s-vibin’ DIY, then grab a copy of Wilder for yourself!

Macramé has gotten a bad rap over the years. Originally developed as a way to finish weavings in ancient Babylonia, the knot-tying technique became a favorite of sailors who spread the art form throughout the world on their travels. The Victorian era favored macramé for making tablecloths, curtains, and delicate, lacy wearables. In the 1970s, macramé knots were used to create elaborate wall hangings and belts, and the 1990s saw hemp macramé jewelry for neo-hippies, grunge kids, and frat boys alike. Suffice it to say, macramé has seen its fair share of style changes, and yet it still endures.

In part, this is because it is so easy to do. If you can tie your shoelaces, you can make this planter. It relies on two traditional macramé knots, the square knot and the overhand knot, which you may recognize as knots you use in a variety of everyday tasks.

In the overhand knot, a loop is formed with a pair of strands and the end is brought through the loop. This is the type of knot you would use to secure the end of the thread in sewing.

Once you’ve nailed these simple knots, more complex macramé knots can be substituted in the same proportions in the pattern below. Or, go wild and create your own pattern – macramé offers endless variations and with just a little practice, you can master them all.

Temporarily attach your metal ring to a nail in the wall, a chair, or a table to create tension while you tie your knots.

Cut the cord into four 18-foot pieces and place them through your metal ring.

Pull each piece of cord halfway through the metal ring. You will now have eight pieces of cord; make sure that all the ends are the same length.

Take the two outermost pieces of cord and separate them from the group of cords.

Divide the group of cords into four pairs. Then tie a knot in each pair 18 inches down from your square knots column.

Take the left cord from a pair and tie it to the right cord of the pair next to it using an overhand knot. Repeat for all pairs.

Measure 4 inches down and repeat the previous step.

Measure 3 inches down and repeat the previous step.

Measure 2 inches down and repeat the previous step.

Join all the cords together, and using the same method you used for your first column, tie 2 inches of square knots using the two outermost cords to tie around the inner 6 cords.

Secure your final knots with glue and allow to dry overnight.

Cut the excess tassel to the desired length.

Suspend your planter from the ceiling and place your plant inside its new home.