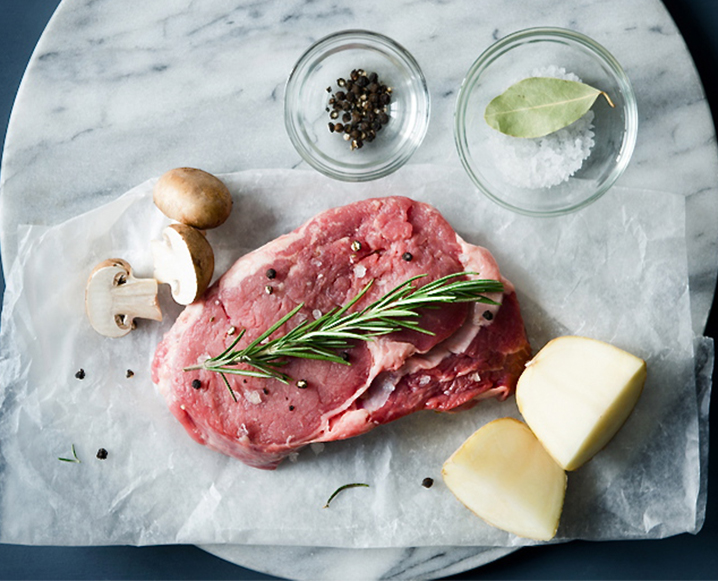 When faced with the label that reads “grass-fed” beef, we’re forced to stop and think. If not munching on grass and hay, what are cattle eating? It’s just this kind of question that has us thinking about how estranged we are from the food we put into our mouths and onto our plates. Learning – and featuring – more about where our food comes from and how it’s produced is one of our resolutions this year. We’re starting with the all-American burger. Let’s break down why grass-fed beef matters – and why it’s worth that more substantial price tag.

Cows are ruminants, meaning they naturally eat grass, not grain. Throughout time, cows have always roamed open plains or grazed on ranches, munching on hundreds of different species of nutrient-dense grasses, shrubs, leaves and even medicinal herbs. This is their natural diet, what best suits the health and happiness of the animal, and also results in better quality products, whether beef or dairy.

If beef is not grass-fed, then it is grain-fed. Grain-fed cows eat mostly genetically modified corn, grain and soy, in addition to the occasional animal by-product, and non-food substances (think peanut shells and candy wrappers). And while we have been led to believe that ‘meat is meat’ – all having the same nutritional value – this couldn’t be further from the truth. Because we are what we eat, and what we eat eats, the diets of the things we consume really does matter.

When cows are fed foods that they were not intended to eat, i.e. grains, a slew of negative side effects follow. These side effects range from poor health in the animal, negative effects on the environment and a lackluster, and potentially antibiotic-filled, nutrient profile. Few realize just how far reaching the consequences of purchasing grain-fed beef are. We’re giving you seven reasons to switch to the grass-fed fare.

One other important take-away: Organic is not always the same as grass-fed. Natural food stores often sell organic beef that is hormone and antibiotic-free, but that does not necessarily mean grass-fed. So make sure that when you are purchasing organic, it is also is labeled grass-fed (and vice versa). This way you can be sure that it is not only free of antibiotics, growth-promoting hormones and genetically modified foods, but that it was also born and raised on organic pasture, with unrestricted access to feed on grass, not grain.

Beef from cows that graze on grass is found to have healthier fat content than beef from those who feed on grain. In particular, their meat is higher in omega-3 fatty acids and CLA and lower in omega-6 fatty acids and saturated fat. Omega-3 fatty acids are essential for a multitude of functions in the body, including low inflammation levels, brain and nerve health, mood and the health of the skin. CLA is a naturally-occurring fat that has been found in studies to assist in weight loss by increasing metabolism and the use of fat as fuel. Research has also indicated that CLA can actively reduce the risk of cancer.

Grain-fed cows are raised in the confines of feedlots, rather than the open pastures where they are free to graze. Not only are they confined most of their lives, they are also frequently sick as well. A diet of grains and lifestyle of confinement can lead to illness in the cows, ranging from chronic digestive and inflammatory disorders to acidosis, liver disease and chronic infections. It is not uncommon for E. coli to infect grain-fed cows as well, which is what leads to its entrance into the food supply.

Industrial meat production is one of the biggest contributors to water and air pollution. A 2006 report issued by the United Nations stated that the world’s livestock generate more greenhouse gases than the entire transportation industry. These greenhouse gases are a direct result of feeding the cows grains instead of grasses. Cows are unable to properly digest grains, which leads to the production of gas. This gas is what pollutes the air, contributing to the greenhouse gases that are damaging our environment.

Finally, grain-fed cows do not enhance the environment like grass-fed cows do. The droppings of grass-fed cows on an open range become nutrient-dense manure that then can be used as fertilizer, helping to grow crops of all kinds.

Grass-fed beef contains 400% more vitamin A and vitamin E than the grain-fed counterpart. Vitamin A is vital for vision, cell growth and differentiation, the immune system and fetal development. Vitamin E is an antioxidant that protects the lipids in our body from being damaged. As a result, vitamin E may help to prevent cardiovascular disease and skin cancer. Finally, grass-fed beef has higher levels of antioxidants, which help prevent disease, cancer and rapid aging.

From 1998 to 2009, the number of serious grass-fed producers in the United States grew from just 100 to over 2,000. This trend can be seen across the U.S. among grocery stores, farmers markets and restaurants offering grass-fed beef, with Southern California leading the pack. In Los Angeles alone, the grass-fed beef concept has been taking off. From the mainstream Burger Lounge, to the high-end Wood & Vine, and even the celebrity-chef concept Short Order, grass-fed beef is the trending ingredient to include on the menu.