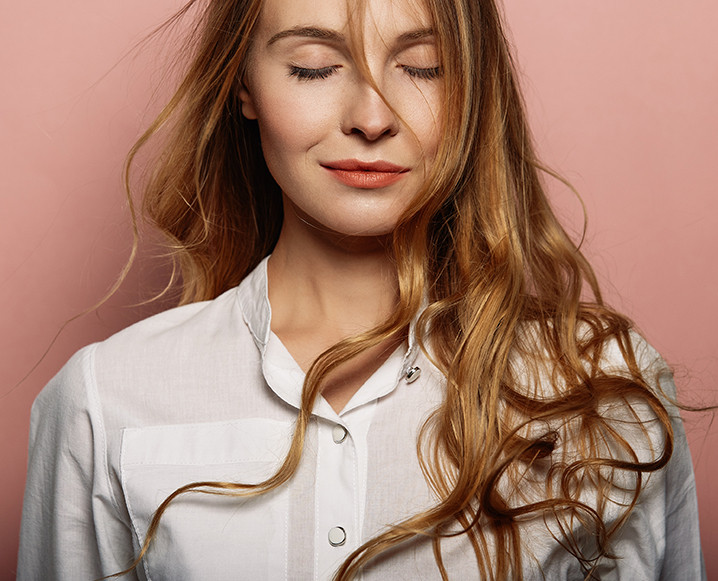 Learn to let go of stress, anxiety and sleep issues with yoga nidra – an ancient style of yoga that encourages relaxation and release on a dream-deep level.

Imagine the lightness of shavasana – or that half dazed feeling of an epic massage – but carried throughout the practice, not just added to the end. Yogi Karen Nourizadeh of Pure Yoga is teaching us all about the unique benefits below, and sharing an easy practice to get us started…

One of the many yogi tools and gifts I bring to New York City for relaxation is yoga nidra. Nidra (pronounced ‘nee-dra’) means sleep, but yoga nidra means ‘psychic sleep.’ In psychic sleep, one feels grounded and enters a magical world where mysteries and answers about the deeper layers of mind exist. In yoga nidra, mental, emotional and physical impressions that one might never imagine, come to light, to the conscious mind. In yoga nidra, we train ourselves to isolate the brain to remain introverted while maintaining a degree of external awareness by listening to and following the instructions. This is done while lying down. In yoga nidra, one can resolve muscular, mental and emotional tensions. Through different brainwave states, or vibrations of the brain-body, yoga nidra also leads one to the doorway of higher states of consciousness.

People who have practiced yoga nidra may relax so much that their brain waves slow to the depths of ‘delta,’ or deep sleep. Achieving ‘delta,’ a very slow brainwave, is like a badge of honor for some in my classes, who cannot slow down. For others who’ve entered the ‘delta’ force too often, they feel as if they’ve missed something special. And they have. That’s because ‘delta’ means that you have entered deep sleep and if you’ve slept throughout the practice, you are unable to remember a thing about the instructions that I have given during the practice – the ones that can take you on that magic psychic sleep ride.

When seasoned in this practice, you will eventually be able to remain awake and aware of what happens even when your body and brain are sleeping. It is a practice and in practice we train. In this practice we train ourselves to stay awake while deeply relaxed. So it may appear something like this in experiential terms: During the practice you become aware of a humming sound and ask yourself, ‘What is that sound? Where is it coming from?’ Then, you realize it is you, and you are snoring.

Since I teach in the ‘city that never sleeps,’ a number of New Yorkers unabashedly hang out in ‘delta’ throughout the practice, because it is likely that their bodies require it, which is beneficial. Yet, for the practice of yoga nidra, deep sleep is not the goal. In nidra, we hover in states between sleep and wake. The magic I and others often experience is then, somewhere in the middle – between sleep and wake.

In a seated meditation, for example, your brainwave is likely in beta, an active awake state of being, when you plop yourself down to meditate. After you close your eyes and focus your mind on your object of meditation for a short time, the brainwaves start to slow down to alpha. Most of us hover (or try to) in alpha brain waves during seated meditations, and try to remain in alpha, absorbed in the object of concentration, which then leads one to deeper mental and spiritual realms.

In yoga nidra however, periodic bursts of alpha are interspersed between beta, wakefulness, and theta, dreaming sleep. This in-between stage is where the magic happens, as your mind fluctuates from extroversion – wakeful, sensory awareness and introversion into dreaming sleep, which accesses the subconscious mind. The subconscious mind is home to our personality, embedded habitual moods, fears, thought patterns, desires and reactions. By remaining in alpha predominance, characterized by deep body relaxation, we can allow more embedded imprints, images, sounds, smells and patterns of the subconscious to rise to the surface and be released, which enables a profound experience of total relaxation. This is actually more beneficial than sleep, which is characterized by body and mind paralysis, where yogis believe that no impressions, fears or desires are released. In yoga nidra, one enters psychic sleep and throws off the burdens one has accumulated in the psyche and body over time.

Yoga nidra can bring up some pretty interesting stuff, which evokes both love and fear, happiness and sadness or questioning, and therefore, it is helpful to have a qualified teacher guiding you through the practice, and to provide a safe place to enter back into once the practice is over. Here’s a simple how-to version:

Find a comfortable position on your back in a quiet-ish area. Not too comfortable of a position that induces sleep. You should have enough room to spread out about a half foot on each side of your body. You might cover your body with a blanket as the body temperature might drop as brainwaves slow down. Allow yourself to access imagination. As Einstein said, ‘Imagination is more important than knowledge,’ and it is imagination that can connect you and bring you deeper in this practice.

Step 1: Close the eyes, and find the breath and body rhythms. Try to remain still for the entire practice. Mentally repeat, ‘I am relaxed,’ three times. Imagine that you are and feel relaxed.

Step 5: Look into the space of the mind, and try not to think. Watch if anything arises from the depths of the mind. Allow images to arise without reacting to them.

Step 6: Slowly bring yourself out of body stiffness and the practice, moving the fingers and toes, and eventually the entire body.

Yoga nidra initiates a process of self-awareness, accompanied by a restructuring and resetting of consciousness and the brain-body. It is reflected in greater stability of the autonomic nervous system, enhanced control of emotions and expanded consciousness. There is an art to relaxation, and yoga nidra is it.