Write On: Making A Mark with Pencils of Promise 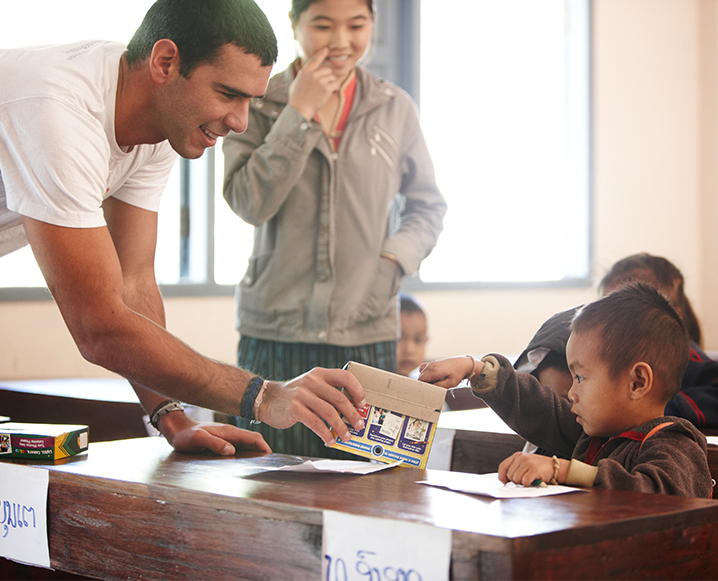 For a long time, it was just about pencils. A pencil requested by a young Indian boy from Adam Braun during his travels to India providing a moment of awakening for him. One that stoked a passion in him to provide simple educational materials for kids in over 50 countries.Those pens and pencils led to the building of a school, then two hundred schools, scholarships, teacher trainings and health programs. Adam’s organization, Pencils of Promise, now works in Ghana, Guatemala, Laos and Nicaragua enabling communities to develop and sustain successful school programs for their children.

One of three charities we’re profiling this month in honor of this month’s Guest Editor, Pencils of Promise is accomplishing a mission both practical and inspiring and reminds us to appreciate just how far the smallest act of kindness can go…

The Chalkboard Magazine: For our readers who don’t know, tell us about Pencils of Promise in a nutshell.

Adam Braun: Pencils of Promise is a for-purpose organization that believes every child should have access to education. In 2008, I put $25 into a bank account to begin an organization that would build one school to dedicate to my grandmother, and five years later it has grown into an organization that builds schools, trains teachers, funds scholarships, and provides health and hygiene programming. To date, PoP has broken ground on over 220 schools throughout Ghana, Guatemala, Laos, and Nicaragua and has served over 28,000 students.

TCM: What was your “aha” moment?

AB: When I was in college, I participated in Semester at Sea, a study abroad experience in which you travel around the world and take classes on a cruise ship. My trip was plagued with rough seas as soon as it began, and as we were caught between the combined forces of three storms, a sixty-foot rogue wave smashed into our vessel head-on. My panic rose as I had thoughts of the ship going down, yet in that moment, a wave of calm rushed over me because I knew that it wasn’t my time. Out of catastrophe came clarity, and I was able to recognize that I was here for a reason. My aha moment was when I identified that my life had purpose.

TCM: Most education advocates have an insightful narrative about the sweeping effects of children’s education on a nation. Talk to us about that.

AB: Pencils of Promise believes that education is a basic human right. It is among the most powerful instruments known to reduce poverty and inequality, and according to the Global Partnership for Education, 171 million people could be lifted out of poverty if children from low-income countries left school with a basic level of literacy. Education has the power to improve the economic opportunities, health, civic engagement and more within a nation, and I believe it is the single most solvable crisis of our time.

TCM: Tell us a bit about the “for-purpose” model?

AB: I believe that evaluating companies simply as “non-profit” or “for-profit” does an injustice to the emerging landscape of business – it’s a descriptor that’s too limited. The idea of “for purpose” is a second axis altogether – where for-profit vs. non-profit defines a company’s ability to truly profit in monetary terms, and companies are also evaluated as “for-purpose” or “non-purpose” which reflects the benefit they provide to society. By placing an equal weight on both axes, we redefine how we see business, whereby “for-purpose” companies are those that are successfully making money and solving social issues. In my opinion, the “purpose” axis is much more important than the “profit” axis.

TCM: What is the biggest lesson you’ve learned in the last 6 years?

AB: In my book, The Promise of a Pencil

, there is a chapter titled “Fess Up to Your Failures” that outlines one of my biggest lessons learned. In the early stages of PoP, two of our team members were robbed in Guatemala, and sent me an email asking if they should file something with the organization. I had interpreted this as them asking for reimbursement, and sent an email back stating that it was not PoP’s responsibility to reimburse the cost of their phones and wallets. The next email from them clarified that they were not asking for a reimbursement, but rather about filing an incident report, and how hurt and disappointed they were by my email. I had wrongly responded as a CEO by addressing financial concerns without focusing on the well-being of my employees, so I apologized for my mistake and the organization immediately established contingency plans to help us prepare for, and, when necessary, deal with the unexpected. We created safety and policy guidelines and established emergency protocols for our staff so that any issue could be resolved immediately and with the full backing of the organization. I believe that the biggest opportunities for growth are not found in the midst of success, but in the methods through which we address failure.

TCM: And the one thing you wish you could impress upon everyone you meet?

AB: That every person has a distinct purpose, and once you discover it and begin to live it fully, you become unstoppable.

TCM: Who is the child who’s made the biggest impression on you?

AB: During Semester at Sea, I began asking a child in each country one question: “If you could have anything in the world, what would it be?” In India, I asked this question to a young boy begging on the streets, and his answer was “a pencil.” I reached into my backpack, and as I handed him one of my pencils, I immediately saw his eyes light up with possibility. This moment unlocked my sense of purpose as it illuminated the global education crisis and the plight of millions of children around the world who lack access to even a basic education.

TCM: What about the teacher who has made the biggest impression on you?

AB: I took a class called Engine 90 with Professor Barrett Haleztine at Brown, who I credit for steering me along the path that I am on today.  I learned about different entrepreneurs and businesses every week, and our big project was to create a business plan for our own entrepreneurial venture. This class gave me the earliest education about management, leadership and the relentless conviction needed to succeed as an entrepreneur.

TCM: What other businesses are exciting you right now in this for-profit space?

AB: We work closely with other innovators and smart start-ups in this space – some of our biggest supporters and partners include Warby Parker, General Assembly, Birchbox, Chegg and 1-800-Flowers.com to name a few. We’re also launching a partnership with Microsoft that we’re very excited about.

Watch Adam talk more about the life-changing experience that shifted his life perspective here. We honor the impact everyone has on their world, whether as parents, creatives, teachers, friends, husbands and wives, community leaders or job providers. You don’t need to start a non-profit to make a difference, but we love organizations like this that do. See how far your small acts of kindness will take you.