Would You or Wouldn't You: Healing Crystals for Your Cell Phone 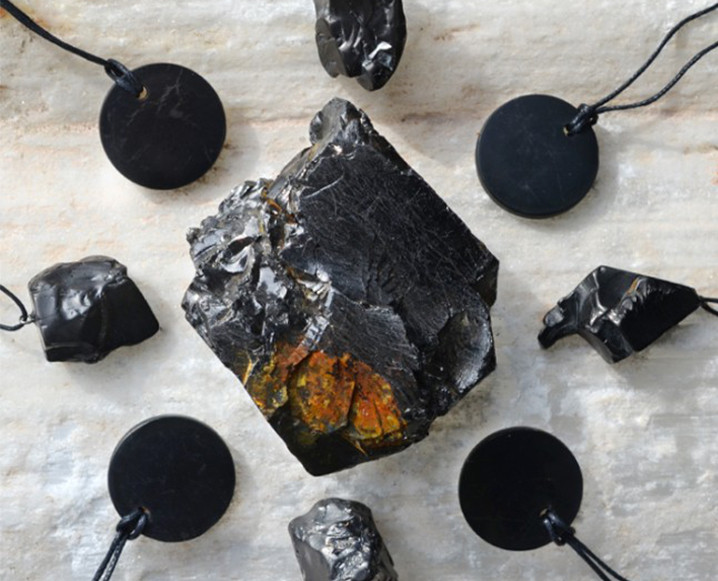 WE COULD ALL benefit from a digital detox. But for those of us who can’t afford that dream vacay away from our cell phones and laptops, shungite crystals might just be the energy hack we need…

Once again, we’re asking “Would You or Wouldn’t You?” and dipping into the world of crystal healing with a look at shungite: Heather Askinosie, co-founder of Energy Muse, is filling us in on this black crystal with the potential to suck up some of that electromagnetic energy overload we’re swimming in each day from all of our electronics.

Does the idea of adding crystals to your phone seem like new-age nonsense (we only wish that shungite looked more like amethyst!) or brain-saving brilliance? Dig into the facts with Heather and decide for yourself…

WHAT IT IS: shungite

Shungite is a mineral that is only found in one place – the Russian part of Karelia. What makes it so interesting to the crystal world is that its structure is mostly made up of pure carbon and a molecular structure known as fullerenes. We could spend hours diving into the properties of fullerenes, but to sum it up: The discovery of fullerenes earned Robert F. Curl Jr., Sir Harold W. Kroto and Richard E Smalley the Nobel Prize in Chemistry in 1996. Natural fullerenes not only have the ability to reduce the concentration of free radicals as no other antioxidant can, but their action is stronger and lasts longer.

WHAT IT DOES: protects from emf’s

Since this discovery, medical professionals have been researching and testing the use of shungite to help heal the body. The book, Shungite: Protection, Healing and Detoxification, elaborates on the specifics of their research, but to sum it up, they’ve found shungite acts against toxins, inflammation and pain while at the same time regenerates tissues, increases the resistance of the body’s cells to free-radicals and protects against electromagnetic radiation (EMFs). Since we’ve started using and selling shungite, we, as well as our customers, have noticed huge energy shifts when working with shungite.

Protects against EMFs . One of the most beneficial uses of shungite is to protect against EMFs. We are constantly surrounded by technology – cell phones, computers, televisions, wi-fi and the list goes on and on. Each of these radiate man-made EMFs. Many people experience EMF sensitivity, and EMFs have been linked to constriction of blood flow to major organs, poor digestion and immune systems, increased blood pressure, hearth rate and blood sugar, arthritis, anxiety and depression. Apple even has a disclaimer encouraging you to not hold your phone directly to your head. Fortunately, there is protection from EMFs. Shungite has a reputation of being able to absorb and neutralize these frequencies due to its components on a molecular level.

Detoxifies the body. When Shungite first arrived at our office, I wore a shungite necklace, used it during meditation and even bathed in shungite water. I was sick for two days. The shungite was detoxifying my body, pulling out toxins and forcing me into a full detox mode. Many of our staff members and customers have noticed a similar, strong effect on their energeric body as well. But after that detox – whether physical or emotional – everyone has felt completely energized and uplifted.

Many studies suggest that using shungite for therapeutic purposes stimulates the immune system and activates a healing process within the body. Working with shungite helps to heal the body on a cellular level and fosters a peaceful energy field. Wear shungite if you have a health concern, to aid in the detoxification practice. As with any solution related to wellbeing, the use of shungite should never replace the advice of a medical doctor.

Alleviates pain. We tested the shungite mats out on different people; all different ages with different body types, and everyone noticed an improvement in the way their body felt after using it. One of our staff members noticed such an improvement in her back pain following a car accident that she doesn’t go a day without using it.

Balances the root chakra. Shungite detoxes the body on an emotional level as well. It doesn’t allow you to put a band-aid over anything that comes up. It demands that you deal with your toxic mental thoughts, emotions and anything that no longer serves you. It brings all the emotions you’ve been holding in to the surface to deal with, but in return, it gives you strength to cut the energetic cords that are making you emotionally (and sometimes physically) ill. Shungite is the ultimate stone for healing the issues of the root chakra, which include depression and anxiety, security and ancestral beliefs.

WHERE TO USE IT: on your technology

Whichever way you chose to use shungite, it’s super important to recharge its energy every two to three days by putting it in the sun for at least four hours. Shungite isn’t your everyday crystal – we literally refer to it as technology from the universe because it’s that powerful. Its carbon structure detoxifies your body energetically and purifies it. To keep that energy strong and stable, cleansing it is key.

In a room: Place shungite cubes in the four corners of a room to protect and ground the energy of your space. The cubes work together to neutralize negative energy and emotions. You can even grid yourself in the same way while meditating for an energetic boost.

On your body: Lay a shungite mat on top of your body to relieve pain and bring an anti-inflammatory effect on the body. One of our staff members swears by its healing effect on her back after a car accident.As jewelry: Wear an Elite Shungite Necklace to bring a noticeable shift in your energy field. Connecting with its energy throughout the day will help neutralize emotions and toxins in the body.

Get your own Shungite healing tools at Energy Muse! What do you say: would you or wouldn’t you add healing crystals to your phone?