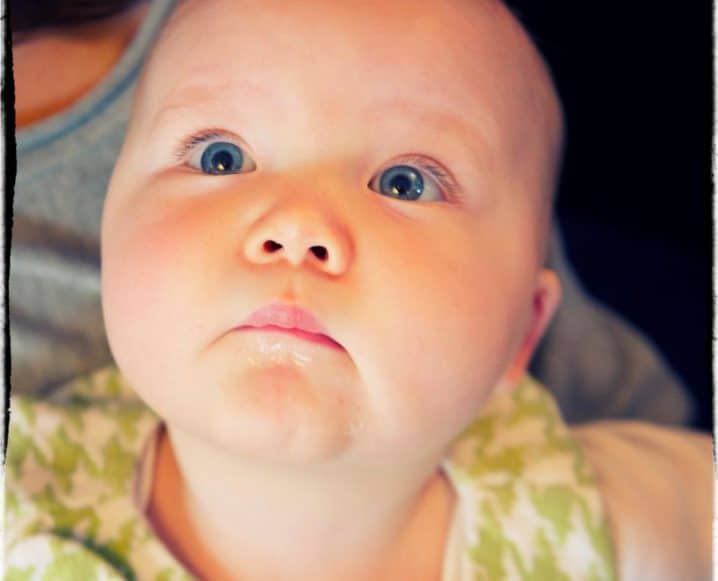 I used to do things like fly to Cleveland for the weekend just because my friend wanted to meet up with some guy she met online and didn’t want to go it alone (she paid, of course). Flights were not only a means to an exciting end, but great opportunities to catch up on my celebrity gossip, take a nap and watch movies like He’s Just Not That Into You. After a five hour flight, I would exit the plane with a slight cramp in my neck and a big smile on my face.

Since having a child, the breezy nature of air travel changed from hours of potential movie watching to hours of inevitable baby shushing and bouncing. For my first flight with Baby Darla (from Los Angeles to Pennsylvania for the holidays), I was incredibly pessimistic, incredibly nervous and incredibly annoyed that I had to do it. By the time we touched down on the East Coast, I was able to breath easier as the ten hour journey was void of the tantrums, long lines and headaches I had anticipated. Baby Darla had slept like a champ and smiled for much of the flight.

Here are some tips on how to prepare for such a flight:

First, wake up in a cold sweat six months before the expected departure date. I woke up at the beginning of July overcome by an inexplicable sense of dread. I ran down my mental ‘Why am I panicked?’ checklist. I checked the monitor; the baby was breathing softly in her crib. I checked the bed next to me; Greg was sleeping soundly. I thought about all the things I could’ve forgotten to do at work; everything that needed to be done had been completed. I lay in the dark for a moment before I realized what it was: I was going to be stuck in a confined space with a baby and a couple of hundred strangers who may end up hating me after five hours.

For a die-hard people pleaser (who will pick up every scrap of soggy food her baby drops on a restaurant floor for fear the waitresses might spend one second cursing her name), this would be a living hell. I spent the rest of the night imagining the decibels at which the future Darla would scream. I eventually had to get out of bed when the sounds of the present Darla crying at 5:00 am harkened the beginning of a new day. Getting that panic early in the planning process helped me stretch the fear so thin that by the time the night before the flight arrived, I slept soundly.

Second, agonize over every detail of the trip for the next six months and fear the trip even more than labor. Between July and December, I started almost every day by worrying over the flight. What if she cries the whole time? What will I do if I forget our suitcases at home? What if someone frames me and I’m brought into secondary at the security line? I called sisters and friends to discuss how the flight would pan out. No one offered much feedback beyond, “Yes, the flight will be a nightmare, but you can’t get out of it now. If you keep your expectations in the gutter, you might find yourself pleasantly surprised.” I took this to heart and imagined passengers spitting on me, angered by my fussy child, who was ripping out large hunks of my hair out of frustration. During the real flight, when people actually looked at us kindly without contempt, my heart filled with extreme gratitude.

Third, make sure your baby is insanely adorable. I’m obviously pretty biased, but I think Darla is amazing. She’s constantly laughing, babbling and smiling at every person who looks at her. Her round face is cherubic and her blue eyes brighten up with excitement once every couple of seconds. Having her be such a chubby cheeked doll helped soften the blow of her occasional (yet shrill) cries. The flight attendants and grandmotherly passengers adored her and continuously came to our aisle to coo at her. Whenever she would let out a screech, I glanced at the passenger sitting in the window seat. The atmosphere in our aisle thickened with tension. My heart would pound and I would shove food in Darla’s mouth as a quick fix to the brewing tantrum. Within a couple of minutes, Darla would laugh with yogurt chips dribbling down her chin and the other passenger would wave and smile at her.

Fourth, throw out every idea you’ve had about good parenting. The plane is a no-man’s-land, so all progressive parenting rules don’t apply there. I’m a firm believer that Darla shouldn’t watch television until she’s two. However, during times of crisis (i.e. extreme fussiness when I’m sick), I bring out the big guns and let her watch Yo Gabba Gabba just to get a moment’s rest. During the flight, I let her watch My Little Pony on repeat, fed her copious amounts of sweet snacks and treats and let her rotate through as many toys as I could fit into our bag. She stayed quiet and I was happy.

Fifth, under no circumstances should you opt to give up your seat on an overbooked flight. Hearing, “We’re looking for any passengers who might be willing to take the next flight. Volunteers will be given $250 vouchers towards a United Flight” used to sound so compelling and sexy. A trip from New York to San Diego could easily turn into an additional vacation (Chicago? Montreal?) with only a few extra hours of waiting. On my most recent trip, I heard those words and my blood went cold at the thought of playing such a game of chance. There’s always the possibility that Darla would spend those extra three hours giggling and playing with her toes, but she may also spend that time bawling her eyes out. Besides, that $250 voucher would expire without us even realizing it since we have all the excitement we need at home where a nightly bath can crack us up way more than any romcom starring Julia Roberts or Scarlet Johannson ever could. I turned to Greg after the request for volunteers sounded over the PA, said “forget that” and counted the days until we were home.

We eventually made it to Pennsylvania and back completely intact; we were pleasantly surprised by how well the two flights had gone. Both were smooth, with few tears and no love lost between my family and the other passengers. As I exited the plane in Los Angeles, I wondered whether my pre-baby self would’ve been as generous and kind as my fellow passengers had been towards me. I struggled to remember an instance when I had seen a baby on a plane. I know there must’ve been a few, but I wasn’t much of a baby person back then so I probably just didn’t notice them. If they had cried, I wouldn’t have heard them over Sandra Bullock’s inevitable epiphany or Owen Wilson’s toothy change of heart. For all the other types of passengers – the baby enthusiasts – an infant is the cutest, sweetest carry-on imaginable. They will naturally fall in love with your Spring 2011 tote and even help you keep her entertained (one flight attendant even held her for a bit). The best part about the flights was that they were perfect opportunities to unplug and give my baby Darla the undivided attention and limitless hugs that my busy life rarely affords.