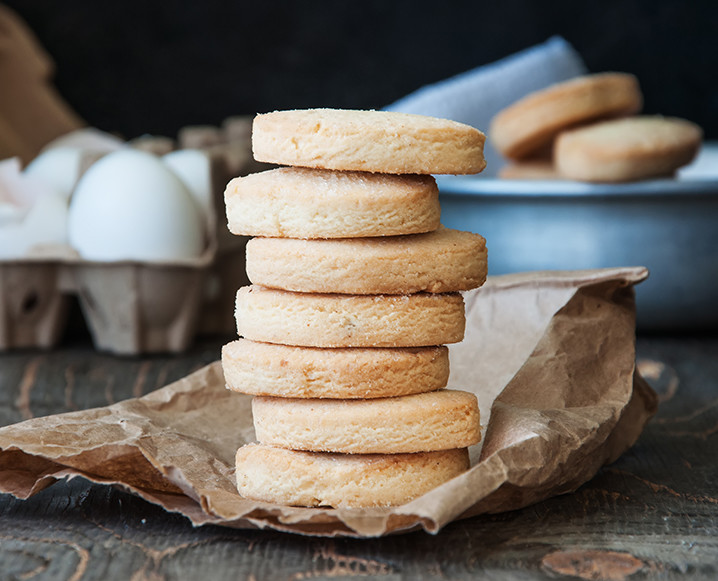 we were blown away by these superfood-infused shortbread cookies while on the farm with Gaia Herbs. The enormous organic farm’s chef whipped them up for us using a secret ingredient – Gaia’s Golden Milk – including ashwagandha grown right there on the property.

Golden Milk is a traditional healing drink that’s been used in Ayurvedic medicine for centuries. The combination of turmeric, ginger, and pepper helps slice through inflammation and bloating while getting us to feel more calm and centered. Gaia’s blend also uses vanilla and ashwagandha for even more nourishing chillness, and cardamom for digestive benefits and a cozy flavor you won’t forget.

Whip up a batch of this dreamy dough, keep it in the freezer, slice off a few pieces and bake them up when you’re trying to treat yo’ self. They’re absolutely addictive and so easy to make. Get the recipe below, and grab a few factoids from Gaia on the mind-body benefits of each spice in their Golden Milk blend…

Turmeric |  Turmeric offers whole-body support, with both antioxidant support and support for a healthy inflammatory response.

Black Pepper | Black pepper is commonly used in Ayurveda and often paired with turmeric to support absorption. It is traditionally considered to be a hot, pungent herb. As such, it stokes digestive fire, called agni, by promoting the natural release of digestive secretions.

Vanilla | The sweet aroma of this herb has long been used to naturally boost mood. Traditionally, Vanilla was considered to be an aromatic herb that supports the nervous system, and it was used to support a healthy libido.

Cardamom | This aromatic herb has a long history of supporting the digestive system. A relative of Ginger, Cardamom (Elettaria cardamomum) was called the “Queen of Spices” in Ayurveda, where it is commonly used. It supports elimination of intestinal gas, while improving digestive function.

Dates | This naturally rich, sweet fruit is a source of vitamins and minerals. Dates have a complex sweet taste similar to caramel, making them a popular swap for sugar. The Date Palm (Phoenix dactylifera) dates back 50 million years, according to fossil records. A staple across the Middle East, it is made into sugar, vinegar and syrup.

Dice cold butter into medium cubes and separate the egg yolk. Set both aside and let them come to room temperature. Mix the flour and Golden Milk and set aside.

Once tempered, beat the butter, sugars and salt for several minutes on medium speed in an electric mixer with a paddle attachment until light and fluffy. Add vanilla and egg yolk, beat until smooth. Reduce the speed and add the flour half a cup at a time. Stop the mixer as soon as the dough is just mixed, finish mixing by hand to bring it together.

Using a cookie baller, scoop the cookies on a sheet pan lined with parchment paper into the desired size and place into the refrigerator to set for at least 15 minutes. While the cookies are setting, preheat the oven to 350 degrees F. Bake for approximately 15 minutes. Remove from oven and let cool in the pan.

Enjoy plain or dust with an equal-parts-mix of confectioners’ sugar and Gaia’s Golden Milk.

Based on Deborah Madison’s Ice Box Cookie Recipe with a Gaia Twist.

Grab two of our favorite recipes for homemade golden milk:
this one from Cafe Gratitude and this one from Nicole Granato.