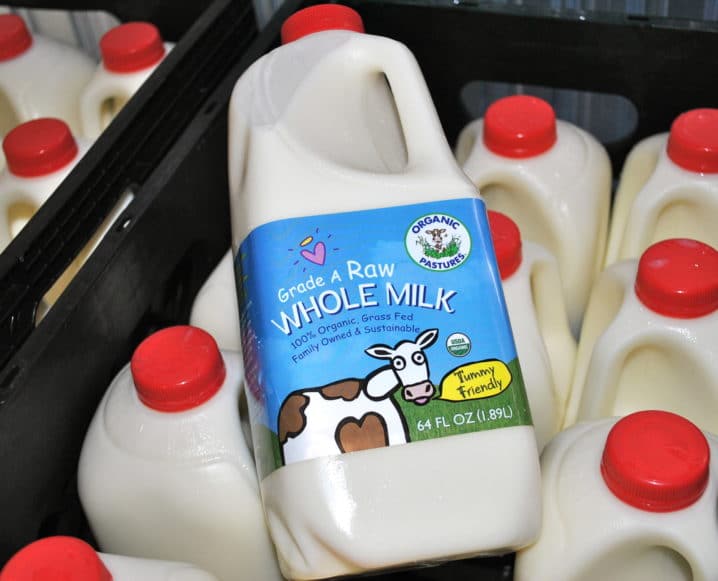 Beyond being cold and white, most people don’t concern themselves much with the quality of milk they drink.  Those who do usually think in terms of low-fat or organic.  But there is another distinction for milk that many are not aware of: raw, fresh, unpasteurized milk.  The health benefits of fresh milk asserted by fresh milk producers and proponents are interesting to be sure, including the claim that lactose-intolerant individuals may consume raw milk without incident.  Here to share with us more about the raw milk movement and its distinctions from conventional milk production is Mark McAfee of Organic Pastures.

Not many people know that they have an option when it comes to fresh or pasteurized milk.  Why should people consider buying raw?
“If you have any type of inflammatory illness like asthma, arthritis, IBS, ulcers, GERD, eczema or digestive challenges like lactose intolerance, raw is your new best friend.  Raw milk contains a broad population of naturally occurring cultures and this same raw milk also has the food to feed these bacteria. This whole food reseeds the intestinal walls with beneficial colonizing bacteria. We must all remember that 80% of our immune system strength comes from the colonies of beneficial bacteria that inhabit the GUT. The highly processed, standard American diet is devoid of these bacteria.”

Raw, fresh milk might sound strange to many consumers.  We don’t think of our cold milk as a cooked product!  Can you tell us a little about the average carton of milk that most of us buy at the grocery store?
“The milk bought at stores comes from hundreds of different dairies, many treated with antibiotics and artificial hormones and fed a ration rich in grains or corn. This store-bought milk is then pasteurized, killing bacteria but also inactivating enzymes and oxidizing proteins. It’s also homogenized to crush butter fat cells and standardized with the addition of dried powdered milk an synthetic vitamins that were lost during heat treatment.  This store-bought milk is no longer a living vital food – it has been denatured.  In fact, the most allergenic food in America for children, as listed by the FDA, is pasteurized milk.

Raw, fresh organic raw milk from pasture grazed cows is different than pasteurized milk at every point.  It is probiotic, not antibiotic; live, not dead; anti-inflammatory and MAST cell stabilizing, not allergenic.  Tested and intensively monitored for safety and quality, raw milk tastes delicious and is not commonly associated with lactose intolerance.”

Most people aren’t aware of the effect pasteurization has on milk.  Can you explain a little about that?
“Pasteurized milk is not clean milk; it is dirty, non-living milk.  That may sound a bit startling, but it very true: conventional milk is collected from up to 50 dairies and placed into 100,000 gallon silo tanks at a processing creamery.  That milk is of unknown quality with pathogens and allowances for very high levels of bacteria.  That is the kind of milk that must be pasteurized. The heating, or pasteurization, of milk does several things:

The MAST cell stabilization effect of raw milk is lost when heated. The effects of raw whey protein have been shown to heal asthma*.  Pasteurized milk actually triggers asthma.

What are raw, fresh milk’s greatest health benefits?
“Good fats reduce inflammation in the body. The bio-diversity of beneficial bacteria re-colonizes the GUT and strengthens the immune system like no other food on earth. Raw milk is highly digestible and provides the colonies of good lactase-producing bacteria to the GUT walls. This eliminates lactose intolerance for nearly everyone that drinks raw milk!  Bone density also increases rapidly because of bio-available calcium and the enzyme phosphatase, which is absent in pasteurized milk.

CRP values drop substantially in direct correlation with good cholesterol levels and heart health.  MAST cells are stabilized with the action of raw whey protein and histamines are controlled – this has been shown to be an effective treatment of asthma.”

What are the most common misconceptions people have about raw milk?
“This depends on who you speak with.  New immigrants to America from Russia or Eastern Europe immediately bond with raw milk and rejoice, saying, ‘Just like back home…yum!’  But Americans that have been indoctrinated into the sterilized ‘treat all ills with pills’ dogma may fear any living food.  Living food is foreign and as Americans, we have been trained to avoid all bacteria, which is the opposite of what is required for building a strong immune system.

Some people get nervous about consuming raw, fresh products.  Is there reason for that concern with raw milk?
“Yes, but the fear is misplaced.  When raw milk is carefully produced, inspected and tested, it is among the safest of foods. In the 1870s, milk was produced under horrid conditions in downtown Boston and New York and killed 50% of the people that drank it. There was no clean water and there were horrible sanitation conditions. This is where the fear of raw milk came from.

These days, we know that cows not given high levels grain or corn, not given antibiotics or artificial hormones or drugs and given a chance to roam on pastures and milked cleanly can and do produce very safe raw milk.  This is as it always was prior to the filthy commercial swill dairies in the 1800s.  While cantaloupes (2011), spinach (2006) and pasteurized milk (2007) have killed many in recent years, raw milk does not have one recorded death in the CDC data base since 1973 – the year this illness data started to be collected.

Raw milk can also prevent deaths.  More than 400o children die from asthma every year in America, even when properly treated with FDA approved drugs with all of their side effects. Raw milk prevents, treats and heals asthma*.”

Which individuals benefit most by switching to raw?
“Every age group benefits from raw milk: babies barely weaned from raw breast milk, children with ear infections, teenagers with skin problems, child-bearing women that need vital nutrition, stressed-out business people that need sustained energy and the elderly who need immune and bone support.  Raw milk is fuel for all humans whatever the age!”

Lactose intolerant folks are able to drink raw milk with no problems, is that right?
“That is right. Lactase enzyme-producing bacteria are alive and well in raw milk.”

Tell us about Organic Pastures’ farm and animals.
“Come visit and see for yourselves!  We offer Eco Visits and answer all of your questions. We have 500 acres of pastures and our cows spend their time sunbathing on the pastures and eating all natural and certified organic feeds only.”

You can read more about Organic Pastures via their website and can purchase their products at over 350 stores and 40 farmers’ markets in California. You can also arrange a shipment/delivery by calling 1-877-RAW-MILK or come out for an Eco Visit by calling ahead. They want to see you!