The 100,000th Bike: How World Bicycle Relief Is Revolutionizing Giving Back 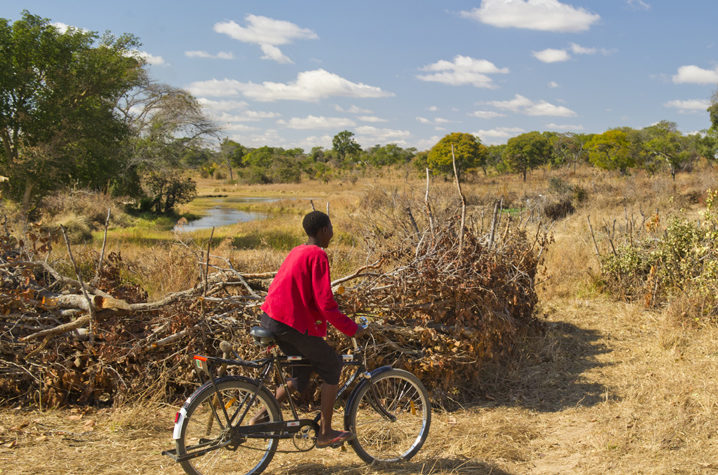 This month, World Bicycle Relief will distribute its 100,000th bicycle to a farmer, student, patient or family in need in countries as far-flung as Southern Sudan and Zimbabwe. The simple solution of two sturdy wheels has revolutionized the lives of many in WBR’s programs: from AIDS patients to young female students who would otherwise not be able to go to school. We honor the WBR’s 100,000th bike with our interview of World Bicycle Relief Chief Operating Officer, Mike Kollins.

The Chalkboard Mag: World Bicycle Relief started 6 years ago as a disaster relief effort to help those victimized by the tsunami. How did that idea come about?

Mike Kollins: FK Day and Leah Missbach Day, the co-founders of World Bicycle Relief, watched the devastation of the 2004 East Indian Ocean Tsunami on their television and realized they had to do something to help. Weeks after the tsunami, FK and Leah travelled to the affected region and worked to see if they could help with the disaster relief.

Given the critical role of transportation, they believed they could leverage FK’s considerable experience in the bicycle industry (he helped found the bicycle components company SRAM 20+ years ago) to design a comprehensive bicycle program to aid in immediate disaster relief as well as to serve as a tool for the recipient’s families educational, healthcare and economic development needs. Given that Western bicycles were not built for the roads or the loads of the developing world and the local bicycles were not even close to good enough quality, FK worked with a local manufacturer in Sri Lanka to design and manufacture 24,000 durable and powerful bicycles.

These bicycles were used to bring medicine to villages, students to school and goods to market.

TCM: When did you realize there was a further-reaching effect that the bikes could have?

MK: The initial response to the World Bicycle Relief program in Sri Lanka was incredibly encouraging but the realization as to the power of bicycles to change the world came when we engaged an independent group to study the recipients who had received bikes. Households with bicycles were healthier and wealthier, and the bikes had become a key tool in increasing the income levels in their families. While not a surprise, this gave us conviction to expand into Africa and to scale up our operations.

TCM: Bicycles are such a simple, but vital solution for many of those who benefit from WBR’s programs. Tell us how WBR has helped AIDS patients through its bicycle programs.

MK: World Bicycle Relief worked with a consortium of aid groups in Zambia on a large scale healthcare program called RAPIDS that was focused on delivering healthcare, counseling and medicine to HIV/AIDS patients in rural villages. Bicycles allowed healthcare workers to see more patients, more often; also, given their durability, the WBR bicycles allowed the costs of these programs to come done considerably. We have always believed that a true give-a-way programs often have lots of negative unintended consequences, so we designed a “work to own” model that allows healthcare workers to “earn” a bike by visiting, treating and monitoring patients. This model increased retention of healthcare workers from levels around 50% to over 95%, which dramatically reduced the cost of the program’s implementation.

TCM: The Work To Own model is being utilized so well in your organization. How did the micro-finance elements of WBR come about?

MK: It is a great story. Farmers in villages where we worked began to notice that our bikes could carry more goods, lasted years instead of months and required much less maintenance. They began to ask us if we could sell them bicycles, but many could not afford the price (around US$150 each). So we worked with local microfinance institutions in Kenya, Tanzania and Zambia to allow for the financing of the bicycles. Similar to a car financing in the West, this allows small farmers to get access to transport which means more income for themselves and their families. To date, we have sold more than 3,500 bicycles through microfinance.

TCM: Tell us about the Study To Own program and the young women this program serves.

MK: Our largest program is a 50,000 bicycle program that is working to improve attendance and academic performance of students in rural areas of Zambia and Zimbabwe. In this program, we sign contracts with local students (heavily biased towards female students, whose drop-out rates are much higher) that allow them to earn a bike by attending school and improving their grades. We have distributed more than 15,000 bicycles thus far in this program and the initial results are spectacular – significant increases in attendance and academic performance for those students with bicycles.

TCM: What has most surprised you in the development of WBR?

MK: The power of bicycles has staggered me. Prior to this, I viewed bicycles as toys rather than tools. During my time living in Kenya, I realized that a single bicycle can be an ambulance, a cargo truck, and a school bus all at once.

I also learned that while some things seem simple in theory, they often are more complicated when you dig deeper. Initially, I thought we could use mountain bikes designed for the US or Europe for our programs – it only took a few days on the ground to realize that Western bicycles can’t cope with the loads and the roads in Africa, and when they broke down, spare parts were not available to repair them, so they ended up in the junk heap in days or weeks. Our design of a special bicycle that is compatible with spare parts in the local markets and that can carry big loads (200+ lbs of cargo) was critical in making our bikes (and our programs) sustainable.

TCM: Is there anything else you’d like to tell people about WBR?

MK: Our programs are much more than just providing bicycles. We definitely supply lots and lots of bicycles, but that alone is not nearly enough to make our program impactful over the long-term. We train field mechanics (700+ small entrepreneurs), we have worked to develop an affordable and efficient supply chain (four assembly factories in Kenya, South Africa, Zambia, and Zimbabwe), and we are now working on an affordable spare part network in the countries where we operate.

TCM: How can our readers get involved?

MK: Check out our website and learn more about us. Consider helping us raise funds to finish the girls education program ahead of schedule. Donors have done amazing things to help us get bikes into the field — from bakes sales at elementary schools to riding their bicycle across America!

Small amounts go a long way in Africa – for approximately $135, we can manufacture, assemble, and deliver a bicycle (with a tool kit, pump, and lock) into the field.

For those who are more adventurous, consider joining us on a trip to Africa to see our operations. It is a trip of a life-time!