TCM Yoga 1.0: How To Pick A Yoga Practice That's Right For You 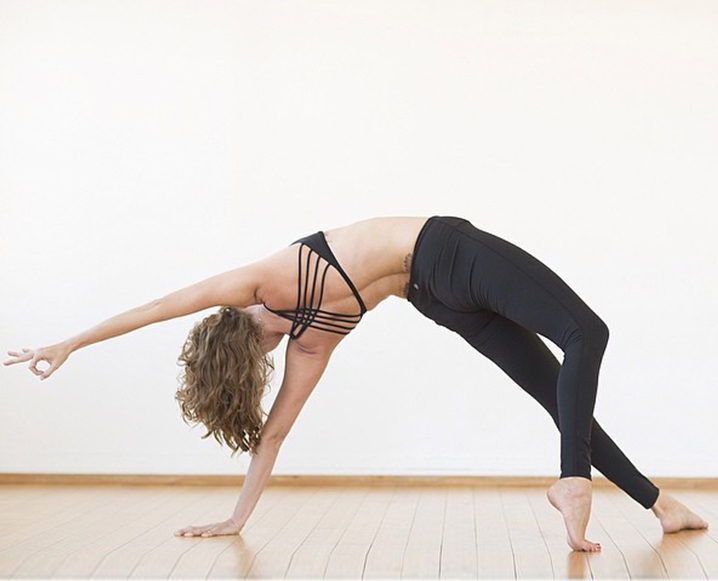 Yoga is having a major moment. With yoga instructors like our lovely guest editor Tara Stiles generating their own celeb-worthy followings, bold leggings cropping up at high-end boutiques across the country, and your very own home practice right at your fingertips, it’s now become easier than ever to zen out and go with the flow. There’s just one problem: with so many different styles, how do you pick a yoga practice that’s right for you?

In this installment of our TCM 1.0 series, we’re breaking down the basics of picking your yoga practice with LA-based yoga teacher and author on the subject, Meagan McCrary, whose students basically begged for her to create her popular book. Eager to demystify all the tongue-twisting names you see on a yoga schedule, she decided to pen what has now become one of our favorite yoga reads, Pick Your Yoga Practice: Exploring and Understanding Different Styles of Yoga

. No two styles are the same, so make sure you choose your class based on your specific personality and goals – knowing what you want is the first step to having a truly yogic experience. Here’s Megan to break down ten different styles of yoga for us, and help us explore the ins and outs of how to get your ‘om’ on…

Between the ever-evolving systems and schools of yoga, hybrid combinations of yoga and you-name-it, and individual teachers coining their own specific brands, there are more styles of yoga than anyone can keep track of — let alone differentiate. It’s easy to become overwhelmed, even slightly intimidated, when it comes to choosing a class, studio or teacher! The good news is that you have options, and once you begin to understand how the various systems break down, you can choose the style, or styles, of yoga that best suite your needs, desires and growth on this path.

Shall we begin? The first step is to familiarize yourself with what’s out there. The following is a quick guide to a handful of the most popular styles on the yoga scene today:

How To Pick Your Practice: 10 Top Yoga Styles

Vinyasa, Flow or Any Combination:

Vinyasa, or flow, is a general term used to describe many different types of yoga classes, all of which use the vinyasa method as the foundation for practice. The term itself means “breathing-movement system” and implies one breath per movement, creating a flowing sequence of yoga poses done to the rhythmic nature of the breath. At the heart of all vinyasa flow practices are sun salutations, a series of nine poses done consecutively to build heat in the body; other than that, vinyasa flow classes can take on a variety of forms, ranging from extremely vigorous and athletic to slow and meditative, however, most classes tend to be pretty aerobic. You will break a sweat. Vinyasa flow teachers are very creative when it comes to sequencing, taking your body on a challenging journey through a variety of postures as you smoothly transition from pose to pose.

On the other end of the style spectrum is Iyengar yoga, known as the practice of precision, paying close attention to the anatomical details and alignment of each posture. Rather than moving quickly from one pose to the next, poses are built methodically from the foundation up with acute concentration and held for longer periods of time while students receive individualized attention from the teacher. Iyengar teachers are very skilled at offering modifications for injuries and limitations, using props as necessary, making this style of yoga appropriate for just about everyone. Marked by discipline, Iyengar yoga systematically cultivates strength, flexibility, endurance and stability along with correct structural alignment of the poses, concentration and proprioception.

Kundalini yoga is a highly spiritual and dynamic practice aimed at expanding consciousness and increasing physical vitality by accessing and integrating prana (life-force energy) throughout the body. The method is multidimensional, using rhythm, movement, breath, chanting and mantra meditations to effectively stimulate and shift your energy. The practice alternates between active exercises (known as kriyas) and periods of relaxation, during which you’ll be guided to pay close attention to any internal sensations you’re experiencing. Beginner friendly, Kundalini yoga promotes a strong inward focus rather than outwardly perfecting the poses, promising that all you need to be able to do is breathe and move and you will have an energetic experience in your very first class.

Integral yoga is a combination of yoga disciplines designed to systematically address all layers of the body, from the physical down to the more subtle aspects of being, the emotional, energetic, and mental bodies. Every class follows the same format, tending to be gentle, slow, and accessible, placing equal emphasis on pranayama, deep relaxation and meditation as well as asana practice. The approach is distinctly uncompetitive as students are encouraged to practice the poses with an internal awareness, staying present to their physical ability and needs and working moderately, never fully exerting themselves. Transforming the whole person, Integral yoga aims to help student access the place of peace and happiness that resides within each of us.

Bikram Yoga is a set sequence of 26 yoga postures done in 105-degree heat with 40 percent humidity for 90 minutes. The sequence is designed to systematically work every part of the body from the inside out. You will twist, churn, bend, bow and fold your way through postures, bringing fresh, oxygenated blood to every internal organ your body. The heat and humidity serve to speed up the body’s natural detoxifying process, sweating out toxins while boosting your heart rate. There is no flow between positions in Bikram yoga, each pose is performed twice and held from anywhere from 10-60 seconds. In the end, the practice is just as much an exercise in willpower as it is physical exertion, pushing you beyond your limits not only physically, but also mentally and emotionally as well. However, if you make it through an entire Bikram yoga class, the feelings of accomplishment are quite empowering.

Jivamukti yoga is a physically dynamic, intellectually stimulating and spiritually inspiring method that incorporates chanting, meditation, deep relaxation and pranayama into a vigorous vinyasas practice with a heavy injection of philosophy, poetry, music and affirmations. There are six different types of classes offered in the Jivamukti method, ranging from basics and beginner’s vinyasa classes to the system’s open class and signature one-hour “spiritual warrior.” The system emphasizes the living spiritual tradition of yoga, bringing ancient teachings alive in a contemporary setting and applying the wisdom to daily life. Teachers are generally very insightful and are often artists, musicians, or, at the very least, self-expressionists who are encouraged to interpret and share yoga’s ancient teachings in their own creative ways. Jivamukti teachers are also known for their effective hands-on adjustments and are quite adept at the art of assisting with touch.

While restorative yoga isn’t a system on its own, many different styles of yoga have a restorative practice in their arsenal of classes. The practice typically involves only five or six poses supported by bolsters, blankets, blocks and straps, allowing you to completely relax and rest into the position as you breathe. Generally held from anywhere between five and ten minutes, restorative poses are a combination of light twists, seated forward folds and gentle backbends, moving the spine in all directions. The practice is highly therapeutic — soothing and restoring the nervous system, releasing deeply held tension in the body and bringing about a balanced state — and is the ideal compliment to a more active yoga practice, especially during periods of high stress.

Yin yoga is designed to help you sit longer, and more comfortably, in meditation by stretching the body’s connective tissue around the joints (mainly the knees, pelvis, sacrum and spine). The passive practice involves specific variations of seated and supine poses typically held for three to five minutes. By allowing yourself to completely relaxing into each posture, Yin yoga gains access to the deeper tissues of the body by first releasing tension the overlying muscles. A major component of the practice is your ability to stay present and focused as you hold the poses, coming into direct contact with feelings, sensations and emotions that are easily passed over in more active yoga practices. The meditative practice teaches you how to just “be” while asking you to accept whatever arises in any given moment.

Once owners of Canadian Bikram yoga studios, teachers Ted Grand and Jessica Robertson founded Moksha yoga in Toronto in 2004. Moksha yoga is one of the fastest-growing forms of hot yoga, involving a well-balanced (and set) series of 40 postures that begin and end in savasana. Unlike Bikram yoga teachers, who teach from a scripted dialogue, Moksha teachers are encouraged to incorporate their individual knowledge, drawing their own experiences and personal practices. There are also different variations of the set series to include Moksha flow, and silent Moksha yoga classes. At the heart of all Moksha yoga studios are the style’s four pillars: be healthy, be accessible, live green, participate in sangha (or community) support, reach out, live to learn and be at peace.

AcroYoga is a partner-based practice that blends the teachings and wisdom of yoga with the power and playfulness of acrobatics and the sensitivity and loving touch of healing arts. Working together to create new openings in the body while exploring aerial movements and postures in a safe, accepting atmosphere, one partner acts as the base and the second the flier. Relevantly new on the yoga scene, AcroYoga was co-founded by Jason Nemer and Jenny Saver, who began practicing together in 2002. Combining their collective backgrounds in aerobics, circus arts, and yoga, they began to explore and create supported aerial versions of the classic yoga postures. The co-founders went on to develop a progressive, systematic approach that involves two forms of flying: acrobatic and therapeutic, making the practice accessible to just about everyone. AcroYoga aims to cultivate connection, community, and trust through direct interaction.