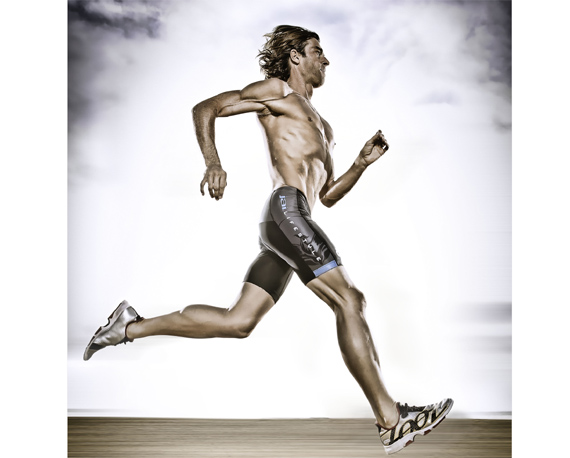 Ultraman athlete Rich Roll wasn’t always in such amazing shape. But after a mid-life health crisis of sorts, he experienced a complete health revolution.  Like so many of us, not until we he was forced to deal with a serious ailment did Rich take a deeper look at what his body needed for vital health.  Taking up a vegan diet Rich not only recovered from his health crisis, but took his sense of wellness to a whole new level. He discovered his love for long-distance endurance exercise and began to compete, placing 11th in the Ultraman World Championships in 2008.

We caught up with Rich to find out more about his journey and to talk about his new book, Finding Ultra: Rejecting Middle Age, Becoming One of the World’s Fittest Men, and Discovering Myself

The Chalkboard Mag: Rich, besides the fact that you lived smack in the center of all that is LA – the entertainment industry, the new age community – you were something of an unlikely candidate for this kind of natural health transformation. Is that right?

Rich Roll: “In certain respects, that is correct. I had been a swimmer in college, but when that chapter closed, so did my interest in anything athletic. Despite the fact that I live in Malibu Canyon, I had never once explored any of the trails that surround my home, and now comprise my backyard training grounds. My focus was on career, marriage and kids. Health was simply never part of the equation throughout my 30s. And my approach to food – cemented during my childhood swimming years with a focus on cheap, fast calories – remained unchanged for decades, a period of time in which my waistline expanded in proportion to my increased feelings of depression and malaise. It took a health scare for me to take a second look. 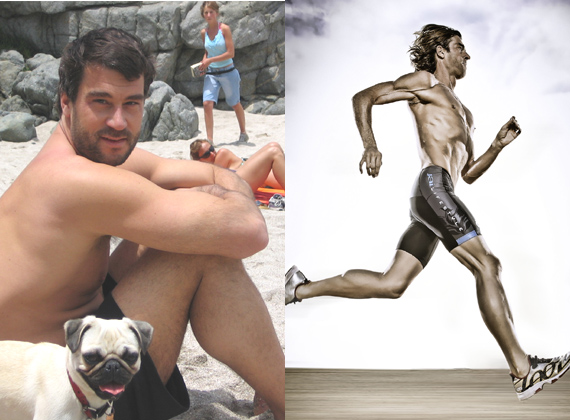 (The author before and after)

But pain is a great motivator. And when I was finally ready to make some changes, I had my wife, Julie Piatt – a longtime yoga practitioner and advocate of a wide variety of alternative healing modalities – as an incredible resource to help guide my transformation.”

TCM: ‘Rejecting middle age’ is actually part of the title of your new book Finding Ultra. Can you tell us about what sparked your mid-life transformation?

RR: “As I describe in the book, I was blessed with a moment of clarity. It was the precipice of my 40th birthday when I found myself defeated by a mere flight of stairs – buckled over and breath labored, I felt my chest tighten. My grandfather was an Olympic hopeful swimmer in the late 1920s and remained active throughout his adulthood. And yet he was felled by a heart attack at a very young age. I knew if I didn’t implement some pretty radical changes that I would likely suffer the same fate. I foresaw my future, and the immediacy of my situation was palpable. At the time, I had no interest in ‘Rejecting Middle Age’ – I simply wanted to live. And experience my children at their energy level.”

TCM: When you began your journey toward vibrant health, was it always related to these pretty massive fitness feats? Did these large goals, like the Ultraman, fuel the initial fires of change or come only afterward?

RR: “The athletic goals came as a resulting by-product of my dietary shift to what I call my ‘PlantPower’ lifestyle. In the wake of my “staircase epiphany”, I didn’t have any fitness goal. All I wanted was to feel better, maybe lose a little weight and take measures to prevent the onset of heart disease. But as I began to pursue a plant-based diet and lifestyle, I was rewarded with such an increase in vitality, I needed an outlet just to burn off the extra energy. This fueled an interest in returning to fitness – not to compete but rather just as an outlet to enjoy my body’s resiliency and rejuvenation resulting from my adoption of a vegan diet.

It wasn’t overnight, but it also wasn’t long before I discovered I was capable of running for hours without fatigue, despite the fact that I had never been a runner. Was it my diet? Was it in my genes? All I knew is that I loved ‘going long’ – being alone on a trail for hours or out on my bike in the canyons. And what began as an active meditation morphed into a quest for an athletic goal – just how far could I push this previously abused and now suddenly vital 40+ year-old body of mine?

So in the most simplistic sense, I would say that my athletic feats are just a natural progression of pursuing this ever-evolving journey that began with adopting a plant-based diet.”

TCM: In 2008, you placed 11th in the double ironman “Ultraman” triathlon. When you began competing on this level, was it just a personal belief that it could be done ‘vegan’ or were there others who had done this as well? Tell us about the fitness community’s reaction to you.

RR: “In 2008, after just 6 months of legitimate training, I placed 11th at the Ultraman World Championships. My only goal was to finish without dying, so I was thrilled. The following year, I returned to actually compete. I led the race by a full ten minutes after the first day, but crashed my bike during the Day 2, 170 mile cycling leg and lost my lead. I didn’t think I would be able to complete the day, let alone the Day 3, 52.4 mile run, but somehow soldiered through and ended up in 6th place overall.

I can’t say I started the trend – Scott Jurek had been destroying the competition in ultra-distance running events for years as a vegan and there are several other athlete pioneers I looked to for guidance, like Brendan Brazier and Rip Esselstyn. But to my knowledge I was the first person to complete the Ultraman on a vegan diet. I initially met with some resistance from friends and colleagues, but I knew not just that it could be done, but that it was a huge part of why it could be done.

Now athletes across all sorts of disciplines are discovering success on a vegan diet – from Ultraman competitors to ironman athletes. Veganism is all the rage in the MMA / UFC world, and even boxer Timothy Bradley went toe to toe with Manny Pacquiao on a vegan diet. The trend is only going to continue and it’s amazing to watch.”

TCM: Talk to us a little bit about protein and men’s fitness.

RR: “There are a lot of misconceptions out there about the role protein plays in health and fitness. To be sure, ensuring you get the proper amount of essential amino acids in your diet to repair the body in the wake of exercise-induced stress is very important. But what most people don’t realize is that it simply isn’t that difficult to meet your protein needs on a plant-based diet, no matter how hard you are training.

I discuss this important issue at length in my book, and have written extensively on the subject online. Here is a recent article I wrote about the protein myth for OneGreenPlanet.org.”

TCM: Most vegans love to cook – or learn to! If you could make just one meal to convert a non-vegan into a vegan, what would it be?

RR: “Probably my wife’s vegan eggplant lasagna with kale chips and homemade lemonade. Her basil almond pesto is to die for! Followed by chia seed pudding with our raw cookies for dessert – delicious! (For all the recipes that have fueled me and my family, check out our digital e-cookbook JAI SEED – 77 pages of awesome plant-based nutrition information and dishes certain to please even the most finicky eater in your family.)

TCM: Yoga, massage, acupressure… what is your favored form of relaxation?

RR: “I love yoga. Aside from the fact I met my wife in yoga, it’s an integral part of my fitness routine. Here’s a popular article I wrote for MindBodyGreen on why I think all athletes can benefit from an avid yoga practice.”

RR: “If you can permit a little self-promotion, I’m very excited about the new vegan post-workout recovery product I just launched, called JAI REPAIR. A formula based on my experience as an athlete and what I need to maximize my recovery post-training, it’s packed with three types of plant-based proteins (hemp, sprouted brown rice & pea), a wide array of antioxidants like resveratrol and berry extracts, as well as l-glutamine. In addition, it contains cordyceps sinesis, a fungus native to high altitude areas of remote China and Nepal that have been found to increase oxygen uptake.

As far as other products, I love Veganaise, Uncle Eddie’s vegan cookies, Daiya vegan cheese and Sweet & Sara vegan marshmallows. You don’t have to be vegan to enjoy any of these – they are all awesome, plant-based or otherwise.”

One Chalkboard reader will win a copy of Rich’s book ‘Finding Ultra: Rejecting Middle Age, Becoming One of the World’s Fittest Men, and Discovering Myself

‘!  Leave us your comments below and tell us about your own fitness journey to win. Good luck!

For more information on Rich and Jai Lifestyle visit his websites at richroll.com and jailifestyle.com.