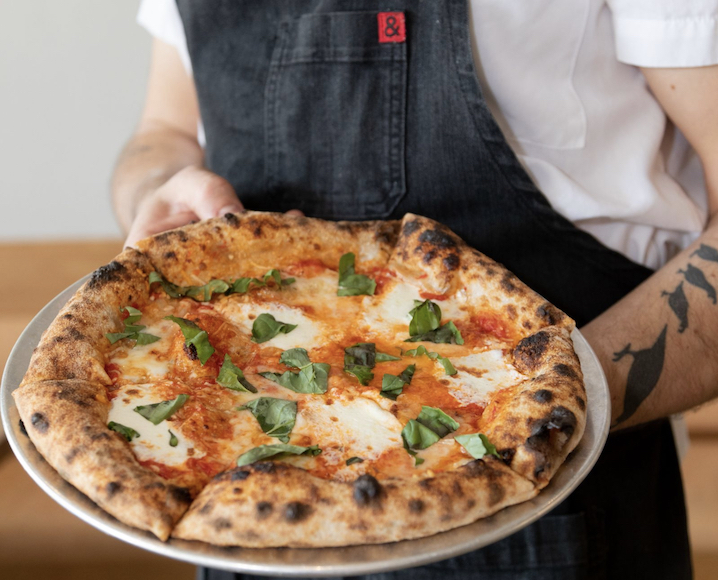 We’ve been on a lot of Zoom calls this year — none better than our hour with two of Tartine’s top chefs for a masterclass in pizza-making.

It doesn’t take a genius to understand why pizza delivery sales skyrocketed over the past year and, in that time, we definitely ordered our fair share. However, with the health of our household in mind, we only ordered from a short list of L.A. restaurants who make their own sourdough pizza crust — Tartine included.

While pizza may never officially qualify as ‘health food’, we feel much better after eating a slice when the crust has been traditionally prepared. We asked Chef Max of Tartine in Silverlake to talk to us about the gut benefits and incredible flavors of their sourdough pizza…

Sourdough pizza crust might sound pretentious to some, but this is how pizza was best and originally made, right? Our food culture simply veered away from it in our hustle for faster, cheaper foods. When did that happen?

It helps to think a little bit about the history of bread here, which essentially applies to pizza dough as well.

The slower fermentation process of naturally leavened (sourdough) dough gives us much better flavor and many health benefits. However, when commercial yeasts became widely available in the 1860s, many bakers switched to the faster, more convenient product to speed up production.

Naturally leavened dough is how all bread was made until the mid-nineteenth century. The method involves capturing wild yeast in a mixture of flour and water, which gives it food to eat. In addition to yeast, this process also allows for the growth of healthy lactic bacteria, which produce the lactic and acetic acids that give sourdough bread and pizza its iconic sour flavor. The process takes many hours, or even days, depending on the temperature.

Commercial yeast — dry active or instant yeast — is an extremely concentrated form of an entirely different strain of yeast. It produces carbon dioxide very quickly, and doesn’t contain any of the lactic bacteria.

With the rise of industrialized food production throughout the twentieth century both bread and pizza dough moved towards shorter fermentation times.

Talk to us about the health benefits: real sourdough pizza just digests better than unfermented dough!

There are several reasons that our pizza dough is easier to digest than other pizzas. Two of the most difficult elements of any wheat product for humans to digest are starch and protein. Fortunately, during the fermentation process an enzyme called amylase actually helps to process starch into sugar, and then the yeast and lactic bacteria that live in the dough eat those sugars and produce carbon dioxide gas as a byproduct, which raises the dough. This means that with a longer fermentation, more of the starch is essentially “pre-digested” for us by the enzymes and microorganisms, making it much easier for our bodies to do the rest of the job. This also helps improve flavor, since starch doesn’t really taste like much, but once it is converted into sugar it adds a noticeable sweetness to the dough.

There is also an enzyme called protease that helps to metabolize the proteins in the wheat, like gluten. With a longer fermentation, the proteins start to relax and then break down thanks to this enzyme, which makes the dough a bit simpler for us to work with, softer to chew, and easier for our bodies to digest. Doughs with a shorter fermentation don’t allow for this enzyme to do its job, and I think that’s where a lot of the misconceptions around gluten come from.

Our pizza’s digestibility is also partly due to the flour we use. A lot of pizza companies use very cheap flours made from wheat that has been treated with pesticides or other chemicals to help them grow, or that add dough conditioners or chemical stabilizers to their doughs to help make the cheap flour stronger. Calcium bromate, in particular, is a dough strengthener used in a lot of flour made specifically for pizza that is a known carcinogen and has been linked with other negative health effects.

Even other companies that make sourdough pizza with good quality flours like King Arthur or Caputo flour are still using flours with an extraction rate of about 50%-55%. This means that 45%-50% of the grain of wheat has been polished away or sifted out — essentially making white flour.

The bran and the germ are the part of the grain that contain high quantities of fiber, healthy unsaturated fats, and many nutrients. We use Cairnspring Mills flour, which is a beautiful flour sustainably grown in Washington. With an extraction rate of around 70%, our dough has at about 20% more of the healthy bran and germ than what most other pizzerias are serving. Additionally, unlike probably any other pizza dough in the world, we incorporate a whole grain porridge made of durum wheat into our dough, which adds even more bran and germ. This means more nutrients, and a much higher fiber content which helps aid in digestion.

Good sourdough crust pizza like Tartine’s is more expensive than the average delivery pizza. What else would you like foodies to know about the benefits or craft behind the pizzas?

Our flour really is one of the most important components of our pizza. While it might be a bit more expensive, it’s worth considering that these flours are coming from smaller independent farmers and millers in Oregon and Washington instead of huge companies that contract out commodity wheat at the lowest prices they can get. The dough itself also takes 2-3 days to make, and is a finicky product that is a true labor of love!

We also try to use the best quality ingredients on top of our pizzas as well. Whether its local produce or great cheeses, we make sure everything that goes on our pizza is thoughtful.

Sourdough pizza also just tastes better. Are most people coming to Tartine because of taste or for their health?

It can be difficult to make pizza in an environment where so many people are trying to be health conscious and where gluten has taken a serious PR bashing, but we think that people are able to literally feel the health benefits when they eat our pizza and realize they don’t have that heavy, bloated feeling afterwards that you get from commercial yeasted pizza dough. Ultimately, it just has to taste better than any other pizza to get people to keep coming back, and I think the taste makes the biggest difference.

Can you share some of you best tips for home pizza making?

To start, it really helps to have a pizza stone or a baking steel to load your pizza onto and help retain heat in your oven. If you do have a pizza stone, and your oven also has a broiler, preheating the oven to the highest setting and then switching it to broil once you have loaded the pizza so that you get the flame to char the crust gets basically a restaurant quality pizza at home.

The other secret tip I really like for making pizza at home is to put your cheeses in the freezer while the oven preheats to make sure your cheese is super cold when it goes into the oven. You don’t want it to be completely frozen, which would make it watery, but as long as it’s very cold it helps keep it from melting too quickly and getting too greasy on your pizza.

We devoured the pizzas we made in your Zoom class! Can you tell us about some of the unique toppings?

We chose some of our favorites for this. The first was The Dom, our classic cheese pizza made with tomato sauce and four different cheeses. We make our own mozzarella which has a fresh, lactic flavor and stays really creamy on the pizza, and we also use pecorino romano, taleggio, and parmigiano reggiano. The blend of cheeses helps add a bit of complexity compared to the standard pizzeria cheese, which is usually just low moisture mozzarella, sometimes blended with provolone. The taleggio, a creamy, semi-soft, washed rind cheese from Italy with a really strong smell, but a mild, sweet, mushroomy flavor, really sets it apart from other cheese pizzas. We also finish this pizza with a lot of fresh basil cut over the top of the baked pizza with scissors, inspired by the famous pizzaiolo Domenico DeMarco from Brooklyn.

The second was our new potato pizza we call Papa’s Pie. This pizza has a bright green leek “béchamel” as the base of the pizza, instead of tomato sauce. It’s topped with taleggio, brined and roasted amarosa potatoes from Weiser Family Farm, parm, and guanciale. The amarosa potatoes are a beautiful pink fingerling potato that Weiser grows here in Southern California, and guanciale is cured pork jowl that we slice thin so it gets super crispy like bacon when we bake the pizza. All together, the pizza has a potato leek soup thing going on.

The green sauce made of roasted leeks on that potato pizza was insane. Want to share the recipe or another easy way to add so much intense flavor to pizza?

I like thinking of sauces for pizzas that aren’t necessarily traditional, but that function in the same way as tomato sauce or cream do to hydrate a pizza as it bakes. We used to have one with smoky charred eggplant, kind of like a baba ghanoush, and we have another vegan pizza on the menu right now made with roasted squash that have been blended with olive oil, toasted sunflower seeds, and a stock made with miso and all of the seeds, scraps, and peels from the squash.

That green leek sauce is a kind of bechamel made with leeks and fermented garlic chives, and it helps add a lot of creaminess so that we actually don’t have to add a lot of cheese to the pizza and still get a really satisfying result.

The key to an inventive sauce is making sure that, above all, it can hydrate the crust a bit while it bakes.