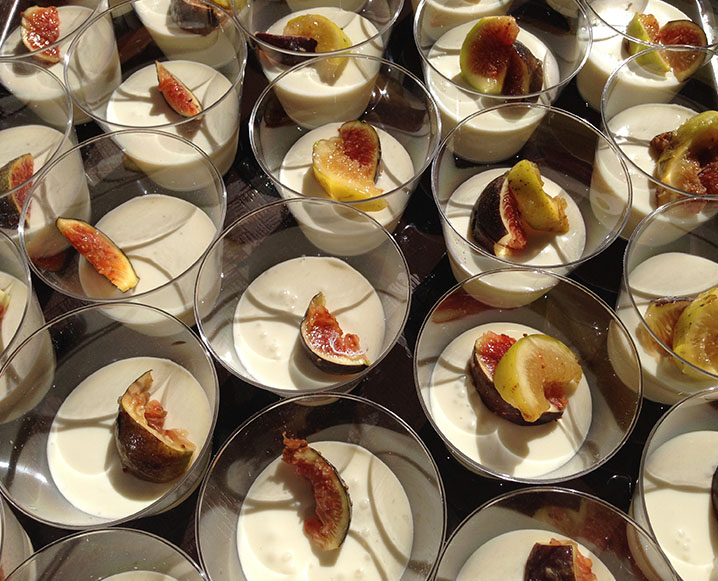 Last weekend, with what seemed to be half of Los Angeles, we celebrated LA Loves Alex Lemonade, a foodie fundraiser extraordinaire for Alex’s Lemonade Stand Foundation. The best chefs from around the city and a few from around the nation gather each year to serve up the best they’ve got to offer for the event’s donors and auction-goers. The celeb-spiked event is a fun fundraising circuit staple to kick off the fall season.

Although we were partial to a few of the fresh juice cocktails offered by bartenders from the Hungry Cat and Lucques – plus the Pressed Juicery juices offered right next to Giada de Laurentiis’ delicious pasta offerings – this sweet and deceivingly simple-looking dessert by Suzanne Goin had the crowd coming back for seconds. This fig leaf panna cotta is as delicious as it is beautiful and we’ve got the recipe! The dessert is served at A.O.C. and the recipe will soon be featured in Suzanne’s forth-coming The A.O.C. Cookbook

. Stay tuned for more from within this delectable new read!

At A.O.C. the panna cotta is plated with melon sorbet, Walnut Pain de Gênes and walnut lace cookies. We’ve tried it both ways, and while all those walnuts are divine, we think this version is easier to pull off at home! Give it a try and tell us what you think…

Place 1/4 cup cold water in a large bowl, sprinkle the gelatin over it, and gently swirl the bowl to combine.

Using tongs, gently grill 2 or 3 fig leaves for about 2 minutes, rotating frequently and being careful not to burn them. Or, alternatively, fan each leaf over a gas stove, without directly touching the flame, until the leaf begins to smell toasted. It is important that the leaves get toasted and have slightly golden-brown spots and edges, but are not burned.

Combine the cream, milk, and fig leaves in a medium saucepan, and bring to a boil over high heat. Turn off the heat, cover, and let sit for 30 minutes, allowing the fig leaves to steep in the hot liquid. Strain the leaves from cream mixture, discard them, and return the liquid to the saucepan. Heat this cream mixture over medium heat to a scald, add the sugar, and stir until it dissolves. Slowly whisk the cream mixture into the bloomed gelatin until completely incorporated. Chill the cream mixture over an ice bath, stirring occasionally, until it’s at room temperature or slightly cool.

Prepare six 3-inch ring molds (or individual ramekins) by lightly brushing vegetable oil on the inside surfaces. Pour a small amount of the cream mixture into a bowl, and whisk in the crème fraîche or yogurt. Then whisk that thickened cream-crème-fraîche mixture back into the cream. (Tempering the cream this way creates a very smooth and silky panna cotta.) Pour the panna- cotta cream into the prepared molds, and chill in the refrigerator for 2 to 3 hours, until set.

When ready to serve, cut the remaining three fig leaves in half and place them on each of six dessert plates. Carefully unmold the panna cottas. To unmold, gently press your finger down on the panna cotta close to the edge, pulling lightly inward, to the center, and then moving your finger along the perimeter of the panna cotta. When flipped upside down, it should pop right out.

Trim the stems of the figs, and cut each one in half. Place one fig half on top and one fig half on either side of each panna cotta. Thinly shave the melon with a vegetable peeler; weave the slices around the plates.

Excerpted from The A.O.C. Cookbook

by Suzanne Goin. Copyright © 2013 by Suzanne Goin. Excerpted by permission of Knopf, a division of Random House LLC. All rights reserved. No part of this excerpt may be reproduced or reprinted without permission in writing from the publisher.