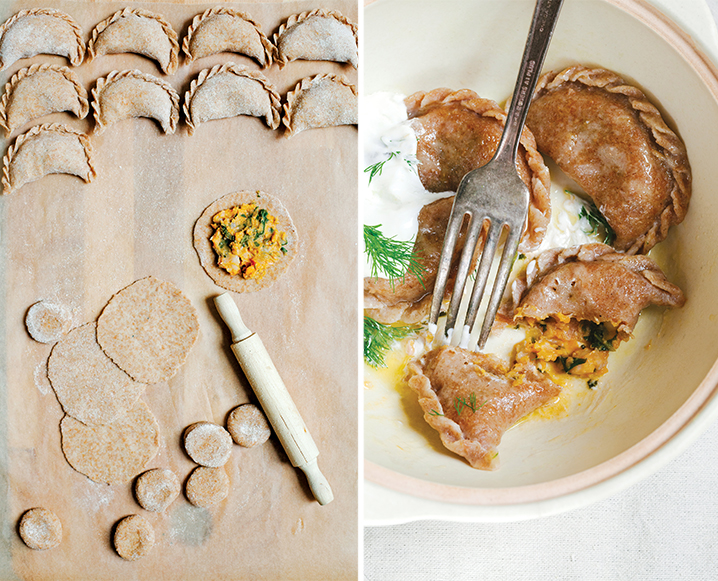 We rely on quick recipes to keep us on track during busy weeks, but it’s the longer, slower and often, more collaborative culinary endeavors that really give us a sense of belonging in the kitchen. These sweet potato and white bean veggie dumplings come from the mother-daughter food blogging duo behind Golubka Kitchen and their new cookbook, Simply Vibrant — and they’re just begging to be made into a tradition.

Host a weekend prep party with good friends and great wine and enjoy the fruits of your labor all week long, or pop a batch of these fiber and protein-packed veggie dumplings into the freezer for your future-self to savor…

I’m going to take advantage of a dumpling recipe to tell an anecdote, which has become something of a hilarious legend in our family. The Soviet Union during the 1980s was a patriarchal society, where most women cooked every meal from scratch and most men did not step foot in the kitchen. My mother’s female coworker, very much from this kind of family, had to go out of town to take care of urgent business, leaving her husband alone to fend for himself. Worried that her husband might starve to death, she stocked a freezer full of home-cooked foods, including his favorite vareniki (Russian potato-filled dumplings). She gave her husband very detailed instructions on how to cook the vareniki, explaining that once they are floating atop the boiling water in the pot, they are ready to be eaten. When the time came to boil the dumplings, our hero followed all his wife’s instructions and waited for them to float. He waited a while, something close to an hour, turning up the heat more and more and failing to realize that all the dumplings had stuck to the bottom of the pot, since he had never been instructed to give them the obvious, a good stir!

Now that you’ve learned to always stir your boiling dumplings, consider making these ones, stuffed with white bean and sweet potato mash and flavored with chipotle spice, onion and garlic — a combination that I cannot say enough about. The dough here is a very simple, go-to dumpling dough, delicate but with a bit of that rustic bite from spelt — a perfect envelope for the soft and hearty, root and bean filling.

Alternatively, you can use a ravioli stamp. You can also divide the dough in half and roll out one portion at a time into a 1/8-inch-thick sheet. Then cut out uniform skins using the rim of a glass or a round cookie cutter. Re-shape, re-roll and re-cut the scraps until you use all of the dough. Be sure to keep the skins covered so they don’t dry out during the assembly process. If you use any of these alternative shaping methods, you may end up with a smaller amount of dumplings.

Carrot Top Chimichurri: I have yet to meet anyone able to resist freshly made chimichurri. This garlicky Argentinian sauce is traditionally made with parsley and served with meat, but can elevate many vegetarian dishes just as well. It also solves my dilemma of utilizing lush carrot tops that often come with market carrots – carrot top chimichurri is almost identical in flavor to the original. That being said, if you do not have carrot tops, make this recipe with parsley for a delicious classic.

Combine flour and salt in a large mixing bowl. Add the oil and work it in with your hands until the oil is incorporated well and the mixture resembles sand.

Slowly add the boiling water to the bowl, stirring constantly until just combined. Scrape the dough onto a floured work surface and knead it until it is soft and elastic. Return the dough to the bowl, cover it with a damp kitchen towel or wrap tightly with plastic wrap, and let it rest while you prepare the filling.

Drain and rinse the beans. Place the beans in a medium pot and cover them with plenty of water. Add the bay leaves, kombu and crushed garlic cloves, if using. Bring the mixture to a boil over medium-high heat, then reduce the heat to a strong simmer and cook for about 30 minutes, or until the beans are soft but not mushy. Drain the beans in a colander set over a large heatproof bowl; reserve the cooking liquid. Discard the kombu and bay leaves.

Warm the coconut oil in a large sauté pan over medium heat. Add the onion and sauté for 8 to 10 minutes or until it begins to brown. Reduce the heat to medium low, add a pinch or two of salt, and sauté for another 10 to 12 minutes until the onion is caramelized. Add the minced garlic and chipotle powder in the last 3 minutes of cooking. Increase the heat back to medium and add the spinach and lime juice. Stir until the spinach is wilted and the lime juice is absorbed, 1 to 2 minutes.

In a food processor, combine the beans, sweet potato, sautéed vegetables, salt and black pepper to taste. Process until the mixture is smooth and well combined.

Dust your work surface with flour. Divide the dough into 4 equal pieces. Working with one piece at a time, roll the dough between your hands into an evenly sized rope, about 1/2 inch in diameter. Keep the other pieces of dough covered.

Cut the rope into small pieces, each about 1/2 inch wide; you should end up with 12 to 13 pieces per rope. Roll each piece in flour and press it into a round disk with the palm of your hand. Using a rolling pin, roll each disc into a dumpling skin about 1/8-inch thick.

Place 1 heaping teaspoon of the filling in the center of each dumpling skin. Fold and pinch the edges together to enclose the filling, making sure to secure the seal. The traditional Russian pinched seal (pictured) is optional. If you are not pinching out your seals, make sure that your dough sticks together well so your dumplings do not fall apart as they cook. Keep all the small pieces of dough covered with a towel while you assemble each batch of dumplings. Lay the finished dumplings on a well-floured cutting board or a parchment paper-lined baking sheet. Repeat this process with the rest of the dough and filling.

Cook the dumplings right away or place the cutting board or baking sheet into the refrigerator and cook them within a day. Or, freeze the dumplings on a tray and transfer them to freezer bags once hardened. They will keep in the freezer for up to 1 month.

To cook the dumplings, bring a large pot of well-salted water to a boil. Add all the dumplings and stir gently to prevent them from sticking to the bottom of the pot. Boil for 3 to 4 minutes or until the dumplings float to the surface.

Using a slotted spoon, transfer the dumplings to a bowl or platter and toss them gently with melted ghee or oil to prevent them from sticking together. Serve the dumplings hot with pesto, chimichurri, plain Greek yogurt or the traditional Russian way — with sour cream.

Place carrot tops, garlic, red wine vinegar, salt, red pepper flakes and black pepper into a food processor and pulse into a chunky puree. With the motor still running, slowly pour the olive oil through the tube on the lid until well combined. Transfer into a clean glass and keep refrigerated for up to 5 days.