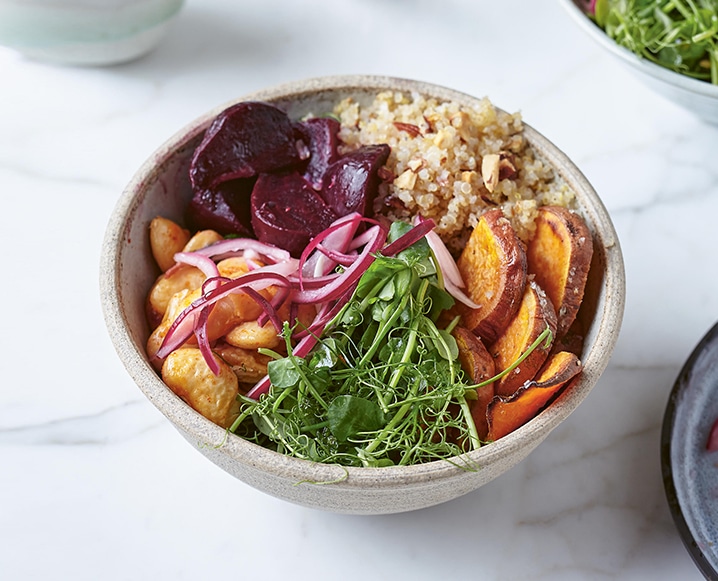 What’s more beautiful than a perfectly balanced plant-based bowl? One that lets you practice new kitchen skills to enhance all of your homemade meals. We love these quinoa bowls made with veggies, vinaigrette and quick-pickled onions from California Living + Eating, a new cookbook that, like, really gets us. This simple but sophisticated recipe can turn a boring lunch into a serious culinary experience…

Soul bowls or grain bowls, whatever you like to call them, they have changed the way we eat lunch (or breakfast, or dinner) in recent years. The key to building a good bowl is in the variety of toppings: some cooked, some raw, different colors, shapes and textures. I usually batch cook all the separate elements in bulk, then assemble different grain bowls through the week. I’ve also found that roasting quinoa after boiling it is a great way to make it that much better. It turns nutty and golden with much more texture. It’s also a genius way of rescuing over-cooked quinoa.

Tip the almonds into a small roasting tray (pan). Toss the sweet potato in a second roasting tray with 1 tablespoon of the oil and season with salt and pepper. Roast the almonds for 6 to 8 minutes until golden; tip into a bowl to cool. Roast the potatoes for 25 to 30 minutes, tossing halfway through cooking.

Toss the butter beans in a bowl with 1 tablespoon of the oil, some salt, the paprika and a splash of the lemon juice, then tip into the roasting pan you cooked the almonds in and roast for 12 to 15 minutes.

Meanwhile, to make the pickle, toss the sliced red onion in a small bowl with the vinegar, honey and a little salt.

Bring a large pan of salted water to the boil, tip in the quinoa and simmer for 12 minutes or until tender but still with a little bite (check pack instructions as cooking times can vary), scooping off any scum that rises to the surface. Drain thoroughly in a sieve (fine-mesh strainer), then spread out on a plate and leave to cool for 10 minutes.

When either the butter beans or sweet potato are cooked, tip into a bowl. Wipe out the tray with paper towel, then tip in the quinoa with another tablespoon of oil and toss; season with salt and another squeeze of lemon juice and roast for 15–20 minutes, stirring halfway, then remove from the oven and set aside to cool slightly.

Lift the onion from its pickling liquid and set aside in a bowl. Add the remaining 2 tablespoons oil to the pickling liquid, then roughly chop the almonds and stir in. Tip into the toasted quinoa and stir together; check the seasoning.

To build the dish, put a layer of the dressed quinoa in the base of a bowl or on a plate. Arrange the butter beans, sweet potato, beetroot and sunflower sprouts over the top. Scatter with the pickled onion, squeeze over any remaining lemon juice and serve.

Cooking beetroot tip: I prefer baking whole beetroot in foil, rather than boiling them, as the flavor is better. You can also roast wedges of beetroot — scrub (don’t peel) whole beetroot, cut into wedges and roast in a little oil in medium oven for 40 minutes. Don’t cook candy-striped beetroot as its visual impact is usually lost. If you find eating raw beetroot challenging, massage slices with a little oil and salt and leave for 30 minutes to tenderize.

This story originally ran in August 2019, but we loved it so much we brought it back!