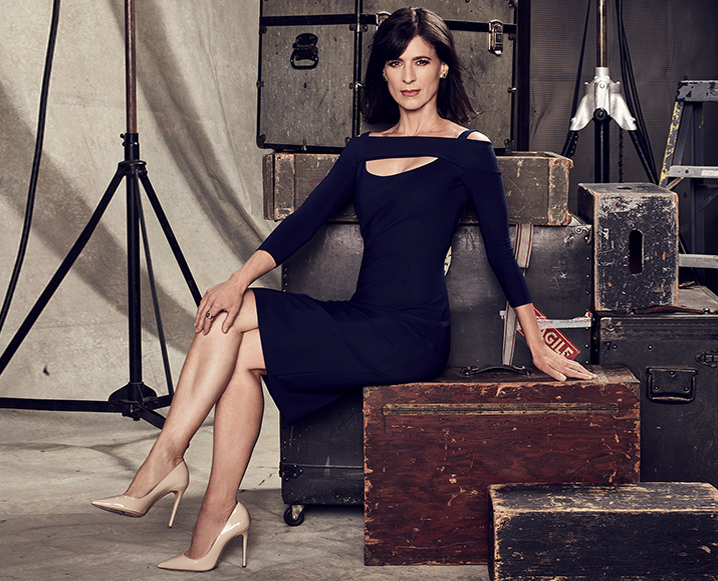 As Mrs. Ari on HBO’s Entourage in the early 00’s, Perrey Reeves may have single-handedly inspired an entire generation of women to get those Equinox memberships on auto-pay. As the svelte wife of an infamous Hollywood agent, Perrey’s iconic role provided major inspo to those of us who plan on keeping our body goals as lofty in our 40’s as in our 20’s.

Most recently, in Freeform’s Famous In Love, Perrey plays mother to a cast of ridiculously good looking characters. It didn’t take long for the writers of the fun and soapy show to spin Reeves into a Mrs Robinson-esque storyline in which she’s paired with her TV son’s best friend. Perrey calls the move “empowering” for women and we agree with her take. It’s not often enough we see grown women cast in powerfully sexy roles and we’re ready for more of it. We regularly see sexy storylines  with older men and younger women — why not flip the script?

Here are the five best pieces of advice we gleaned from our wellnessy chat with Perrey. Though she’s genetically blessed (she comes from a family of celebrated athletes) and a devout vegan with her very own yoga retreat, we think these lifestyle tips can be applied by everyone – even if your weekend hike doesn’t end at the Hollywood Sign like Reeves…

Number One: Mix it up| Perrey probably mentioned a dozen different studios and workouts in our chat. From piloxing to yoga, Reeves says that mixing it up keeps her committed to regular workouts — and keeps her brain healthy and challenged too. She recently took up weekly tennis lessons, something she’s never done, just for the mental and physical challenge.

Number two: get in there! | Perrey noted the often intimidating culture of gyms and studios– especially in LA. No matter where you work out, a svelte bod or two can actually keep some us from regularly breaking a sweat. “Don’t let that happen!” says Reeves. Even here in LA, were there may be an ingenue or two at your pilates studio do not allow yourself to be intimidated out of a workout. We’re all hitting the gym to get in shape – stick to your plan. You do you!

Number three: No excuses | One of Perrey’s best pieces of advice was to nix the excuses. No time for the gym? Create a menu of more flexible fitness ideas. For Perrey that means a 25 minute routine she’s created in her neighborhood while she walks the dogs – hills and a local set of stairs included, to break a sweat on off days. She also loves finding hikes for the weekends and regularly hikes to the Hollywood sign with friends.

Number five: best l.a. studios | For those readers who are here in LA, Perrey also list a few of her favorite studios, including Carrie’s Pilates Plus reformer class with trainer Carrie Minter; Rising Lotus’ for Kirtan (yogic singing), vinyasa and senior teaches who truly inspire;

Number six: Hit the target | Perrey’s last fitness tip was for the red carpet. Whether your version of the red carpet means date night or a an evening out with the girls, we love her real life advice. “Before the red carpet, I’ll target my workouts to a specific look. Recently I wore a sleeveless dress to a premiere and added weights to my arm workouts the full week beforehand.” There’s no shame in a little strategy and we’re keeping this practical advice in mind all holiday party season long.