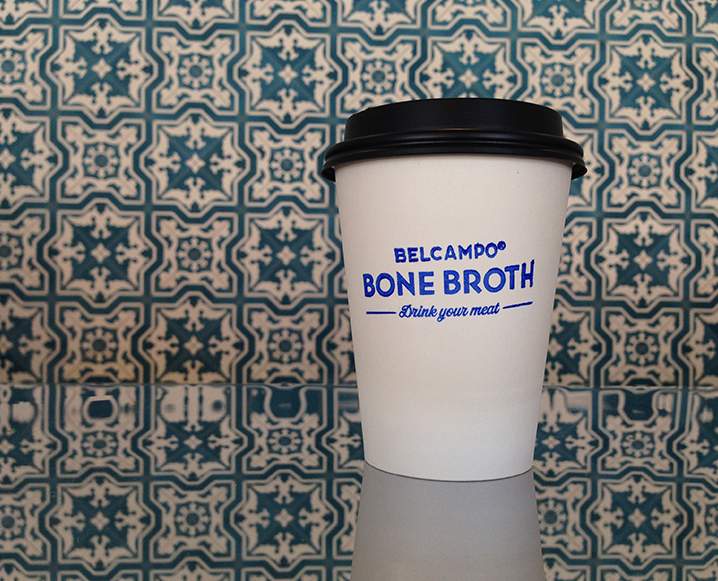 We’ve always been double-fisted creatures: green juice in one hand, coffee in the other. Our green juice addiction can hardly be improved upon (hello, Greens 3!), however, lately, we’ve been upgrading our hot morning drink and sipping on this deeply nourishing, non-vegan cup of brew.

When we heard about New York restaurants like Brodo, who are serving up traditional bone broth like lattes in paper cups, we were floored. It seems like an idea whose time has come. Like bottled green juice, bone broth in coffee cups is a pitch perfect modern health solution. And we’re happy to say that the bone broth trend has finally hit L.A. in an accessible way.

Bone broth, like the chicken soup so many of our moms fed us growing up, is great for immunity and deeply comforting. This healing traditional food began to trend hard last year – and when public personalities like the entire Lakers team got in on it – the media went wild.

We love it when wellness trends go mainstream, but it’s important to be equipped with the right information, not just the glossy overview. We have a few things to say about where you buy the stuff. The health benefits of real, clean-sourced bone broth are not the same as that questionable bouillon cube in your noodles. The bone broth we’re advocating is made with the bones of hormone and antibiotic-free, grass-fed, humanely-raised animals. Bones are cooked down for a remarkably long time (24 hours or more) until the bones break apart, releasing  bio-available forms of vitamins, minerals and gelatin that deeply hydrate the body and replenish the skin, our gut and joints. Broth’s benefits have much to do with this miracle ingredient.

Bone broth is part of a family of “traditional foods” being given a second look by modern foodies. Bone marrow has been trending in the restaurant world for years and the health benefits with broth are quite similar. The turn toward bones, organ meats and other, um, “earthy” cuts have to do with idea that perhaps we lost something when we stopped using the whole animal in our diets as our ancestors did for millennia.

What do you think of the whole bone broth trend? We know some of you are already trying it at home – which takes a pretty serious level of crockpot-oriented commitment. Bones can be ordered from some local CSA programs or specific ranches at your local farmer’s market. Making broth is not an impossible task, but definitely a task. There’s something that thrills us about being able to swing in to a shop and pick up a cup of healing broth just as easily as a double vanilla latte. What do you think?

Where to shop: You can find bone broth by the cup at the organic Belcampo butcher shop in downtown L.A. and now in Santa Monica.