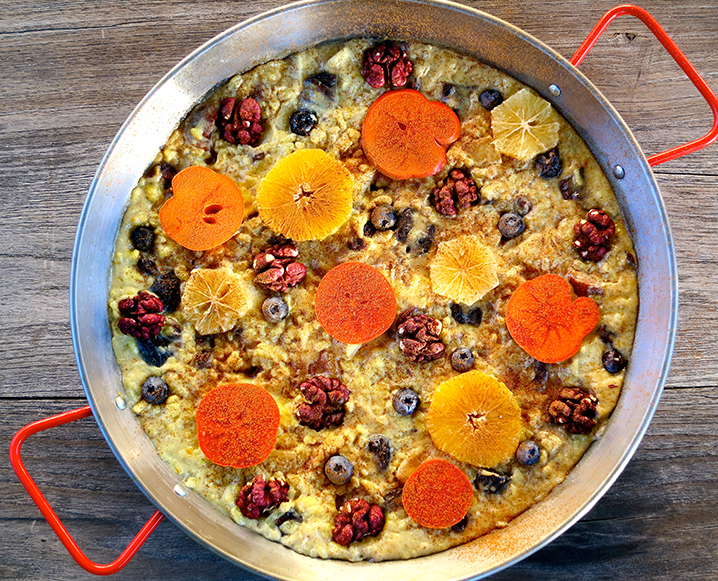 Recently, we were treated to a few courses of dessert by Chef Sandra Cordero at a dinner party in Venice. There were chocolates, sweet cocktails, candy and well-made pastries, but we were blown away by this clever recipe for dessert paella. Stuffed with saffron (and shellfish free, naturally), this rice pudding-like dessert was served, to our delight, in a traditional paella pan! Too delicious and spot-on for upcoming holiday dinners. We asked our chef, the Spanish beauty behind Cordero Negro, for the recipe and she generously obliged!

This inventive dessert paella recipe is the perfect example of what Sandra does best – focusing mostly on private in-home cooking, she creates fascinating dishes guests will remember – all with a seasonally-focused and local flair. Try Sandra’s recipe and, if you’re as hooked as we are, book her for the holidays: the brand new and genius Kitchensurfing booking services allow you to choose from an incredible array of private chefs that will come to work their magic right in your own kitchen for parties big or small!

fruit and nuts for decoration, such as persimmons and walnuts, blueberries, orange and lemon slices
ground cinnamon

Bring to a boil and then simmer for 30 minutes, stirring often to prevent skin from forming.

After 30 minutes, check rice for doneness. It should be soft but not mushy. If still hard, add a little more milk and cook a little longer. When done, remove the vanilla pod, cinnamon stick and star anise from the rice and discard.

While rice is cooking, peel apple and cut up all fresh and dried fruit into bite size pieces.

Melt butter in the paella pan and add diced apple, persimmon and dried fruits. Sauté until lightly browned, then add honey, brandy and citrus zest, cook until liquid evaporates. Stir gently so all fruit is coated, and then add the sliced banana and let cook for two more minutes.

Add rice and creme fraiche to the paella pan.  Stir, and then shake the pan a bit so it settles evenly, cook for another 5-10 minutes on low heat.

Remove from heat and let the paella cool to room temperature.  Decorate with fruit and nuts, and sprinkle with cinnamon. If eating the paella later, refrigerate and cover with plastic wrap directly touching the rice.