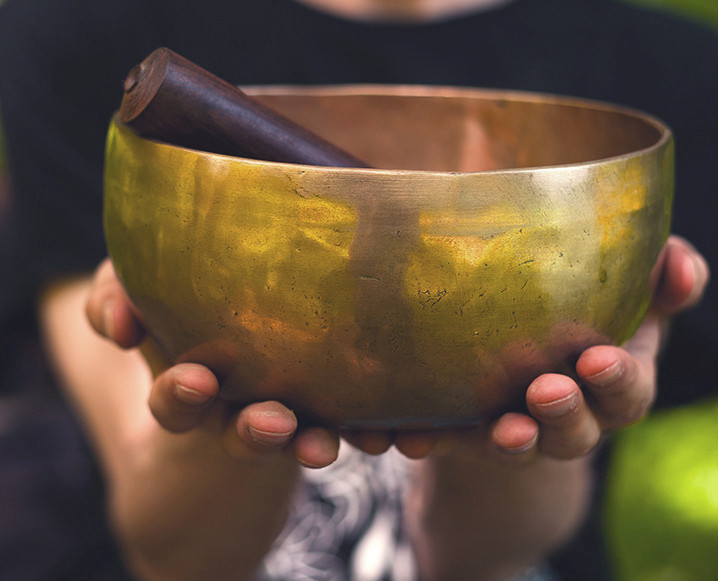 we’re happy to see music and sound therapy popping up quite frequently lately at yoga studios and other events around L.A. As strange as the practice may seem, sound therapy is quickly gaining new devotees thanks to the undeniable effects experienced during a session or “sound bath.”

Sound therapy’s fundamentals are complex, but the experience is not. After all, haven’t we all felt the high of a great live concert, the soothing calm of a mother’s song, or felt the need to hum or sing in order to shift our own mood? Maybe we’re over-reaching on our definition of “sound therapy” here, but what we mean to say is that this unconventional way of achieving better health and a quieter mind is much less strange than first meets the ear.

El Larson is a sound practitioner, and recently led a sound and music therapy session for over 100 participants during Campowerment‘s weekend gathering here in Malibu. Campowerment, the 3-year old brainchild of Tammi Leader Fuller, is a therapeutic sleepaway-esque camp for grown-ups and girl bosses, with programming dedicated to inspiring health and wellness through hands-on workshops and gatherings. We caught up with Tammi and El and asked them to discuss this incredible therapy with us. Find out what sound healing is and what it can do for your state of wellness…

Tammi Leader Fuller: What is a sound bath, and how does it work?

El Larson: A sound bath is a vibration-rich sonic environment designed to “bathe” its participants in sound, and bring them to a meditative state. This sound is created by “playing” various instruments including Himalayan metal or crystal singing bowls, gongs, didgeridoo, voice, drums or electronic instruments. I use very old metal bowls from Tibet, and a mallet to create the sounds that respond to the collective energy created in the room.

With no melodies or lyrics for the mind to attach to, sound and simple rhythms reduce brainwaves to an Alpha or Theta state (out of ‘thinking mind’) and brings people more in touch with their subconscious – where the real ‘healing’ can happen.

TLF: What are the effects of sound healing?

EL: It’s pleasant, it’s calming and can reduce your respiratory rate, heart rate, stress and anxiety. Even Western medicine has recently acknowledged this. #Win (Are we still going to pretend to be surprised that shutting off our minds for a while is good for us?!)

TLF: What does it feel like to be on the receiving end of a sound bath?

EL: Physically and energetically, it’s like you’re getting retuned, as you feel the vibrations being absorbed by your body. Some might see visuals (images, shapes, colors) or feel like they’re floating, and after the session is over, may have significant dreams and realizations relating to things they never even thought about. It ranges from ‘that was relaxing and interesting’ to ‘whoa — I feel a huge shift and my chronic pain is gone’ – it depends on what the person is ready to experience and possibly shed.

TLF: Why is sound so powerful? How has it proven powerful to you and through you?

EL: Sound hits us on nearly every level… physically, emotionally, energetically — consciously and unconsciously. Even thinking about a sound (nails on a blackboard) can induce a physical response.

Personally, I’ve always been obsessed with music, and most often it was the sounds used that determined whether I liked it or not. I started DJing (techno, minimal, etc.) in ’99, which I guess was my introduction to manipulating an environment with sound and reading an audience to get them to like what I wanted to play. A few years later I moved to London, worked on the Fabric record label and at the same time, started practicing yoga. It was the ultimate balance — going to a club with an amazing sound system (and a vibrating ‘Body-Sonic’ dance floor) and discovering my deeper energy systems.

When I left to move back to the U.S., I detoured to India for six months and at the beginning of my travels, visited some Buddhist caves. The resonance in them was mind-blowing — I was bathed in sound just by chanting ‘Om.’ It was such a visceral experience and completely redirected my life. I read everything I could find about the principles and ancient practices of sound ‘healing,’ and when I finally settled in Los Angeles, I built a sound chamber in the alcove in my apartment. I started teaching yoga, and while giving adjustments could feel frequencies not only in myself, but in other people’s bodies. I finally found my teachers, Diáne Mandle and Richard Rudis in Encinitas, who specialize in the ancient, singing Tibetan Bowls — I wanted to learn from the roots of what I had initially experienced.

EL: There’s a carving dated over 5,000 years old that shows a monk holding a bowl with a mallet, so the practice has been around for quite awhile. I use 100+ year-old Himalayan bowls that were made for healing or ceremonial purposes, likely made by or for monks. There’s a significant difference in sound between the bowls made for healing versus the new ones you find in gift shops. The old ones have a lot of mojo… I can’t explain why, but some of my bowls feel extra ’special.’

They’re made of a metal alloy, including gold, silver, copper, tin, lead, mercury, and iron — which is considered the most important metal, as it resonates with the iron in our blood. Slightly different styles of bowls have been found throughout India, Nepal, Tibet and Bhutan, however they’re commonly all referred to as ‘Tibetan’ bowls.

TLF: What makes the bowls sing, and how do they help release blocked energy?

EL: Singing a bowl (crystal or Himalayan) is done by rubbing a mallet around the rim so the bowl vibrates, producing a sound and emitting a vibration. The Himalayan bowls create a harmonic tone — several tones — vs. crystal bowls that ring out a single tone. Harmonics have been found to be more effective on brain wave states.

Entrainment — the principle that two things in proximity of each other that are resonating at different rates and will eventually sync — is the key to sound ‘healing’ and releasing/ shifting energy. Nodding your head to music is a basic example — a song comes on, and suddenly your body is moving to the beat. The sound of the bowls can be purely relaxing, where people shift from a faster vibratory state of stress or anxiety and align with the slower pulsing and warm tones of the bowls. If the bowls are placed on a person, they can really feel the resonance penetrating deep into their body. The physical vibration of the bowls can help release deeper levels of stress and shift energy. A lot of clients say it’s like getting a massage for their body and mind.

TLF: What happens (what does it mean) when the bowls go silent?

EL: The sound and ‘mood’ of my bowls can change depending on the person, through entrainment and because sound waves react differently bouncing off (or being absorbed by) different densities — physical or energetic. A change in the typical sound of a bowl may be due to an injury or imbalance. I listen for these fluctuations, in addition to other things I’ve assessed about the person, when I am doing a private session.

However — unless you’ve spent hundreds of hours with healing bowls on many dozens of people to observe these fluctuations in a variety of scenarios, I wouldn’t read into a bowl not singing or ringing. Some bowls don’t sing for some people, some bowls need to ‘wake up,’ sometimes it’s the technique of the person playing, or the temperature of the room that can change the sound.
It’s not as much a factor with group sessions, as the sound primarily can change when they’re on or very near a person.

TLF: How does it work with large groups like the 100 plus women you bathed in sound at Campowerment?

EL: Hearing the sound is one thing, feeling it can be transformative. With larger groups in a sound bath, it’s nice to have multiple people roaming the room with instruments. Several (amazing) Campower Rangers (counselors) moved through the room with instruments to bring the sounds to the Campers, so all could feel the vibrations when bowls were played on or very close to their body.

For one session, I played a deep, droney/ ambient track that I had produced so I could go around and play my bowls for each person as well.

All weekend, women were telling me how much it affected them — from feeling calmer and sleeping better, to opening or releasing energy, to unblocking digestion. It was such a testament to how individually impactful this practice can be.

TLF: You mentioned the sound bath is an ancient healing practice; why are we just starting to hear about this now?

EL: For hundreds of years, these were kept as secret practices, as they’re sacred and can be very powerful. When my teacher started going to Tibet 30+ years ago, they wouldn’t tell him anything and referred to them as bowls for cooking or eating. Sometimes, even the villagers didn’t know their significance and were actually cooking in them, which isn’t advisable, as they are made with lead. Over time, from developed trust and the destruction of the Tibetan culture, people began to open up in order to preserve the traditions and share their healing powers. My teacher, along with a few others, have brought a lot of information back over the last few decades.

The timing of this knowledge migrating aligns with Western society realizing the connection between emotional/spiritual health and physical health. People started turning to acupuncture, transcendental meditation and other holistic modalities as a last resort when pills weren’t resolving their concerns. Today, even acupuncture can often be covered by insurance.

A few decades ago, yoga was only for hippies, and now it’s very mainstream. The branding and delivery of energy work over the last few decades has been very woo-woo and new-agey, which many people don’t take seriously. A lot of things have begun to open up — primarily people’s minds.