Off the Grid: Heather Culp on Pursuing An Unplugged Life 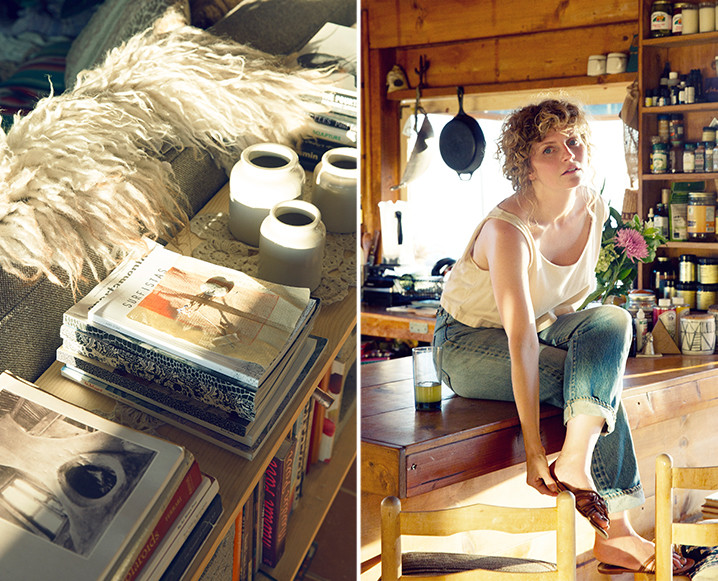 Mercado Sagrado is the kind of place we’d dream up in our wildest off-the-grid-but-still-in-reality fantasies: where people come to be creative, inspired and tuned in. This annual fair celebrates one of our favorite areas of the city – Topanga Canyon – and features live music, art, delicious food and holistic happiness at its best.

Photographer Heather Culp is one of the gathering’s co-founders. We recently met Heather at her home in the canyon as she hosted the dreamiest breathwork workshop of all time by our pals Nitsa Citrine of Sun Potion and Ashley Neese. Her tiny, but intensely stylish home had us dreaming of a more free-spirited life. When we learned that Culp also lived on her own and off the grid in New Mexico, we needed to learn more about this well-styled adventurer and talented artist (stay tuned for more on that!). Meet Heather below and get a little off the grid living inspiration for your summer weekend…

Surfing! This is new and I’m terrible but I’ve always been a water person and it’s awesome just being out there. I apprenticed to an herbalist when I live in Taos and I love working with plants – most recently, I learned how to make flower essences and it’s something easy and fun to do where I’m living now since it’s so wild.

Hiking (having a dog is extra motivation!). Meditation. Morning green drink of Sun Potion chlorella, Hawaiian spirulina and HealthForce Greener Grasses. Sea Minerals. Good water – spring water is amazing to have, but not always possible so at least reverse osmosis water or from my Big Berkey filter; it’s so important since tap water is often treated with things like flouride and chlorine.

On living off the grid:

I lived in an earthship in Taos, NM that was constructed in a way in which to hold heat in the winter and keep cool in the summer. There were solar panels, a grey-water system with beds for growing vegetables inside the house and a cistern for rainwater with a waterfall (pre-stocked with crystals) to oxygenate it. The house was built right into the mountain at 9,500 feet. The views were amazing and there was a skylight over the bed to watch the stars.

Living off the grid is amazing. Once I did it, I realized how easy it is to be self-sustainable and live in a way that is in alignment with nature – instead of against it. You’re instantly made aware of the footprint you’re making and it actually makes your day-to-day life easier when you take steps to reduce it. By that I mean, no one picks up your trash so it’s easier if you make less. If you only have rainwater from your rainwater catch, you conserve. And having a grey-water system that waters your garden helps.

Living off the grid can be very basic or super sophisticated. My situation was more basic, which in some ways was more of a challenge, but it’s surprising how quickly one adapts to limitations and really it’s often easy to turn something that was once frustrating into something positive. For example, we didn’t have a huge number of solar panels, so it wasn’t really possible to stay up all night watching movies or Internet surfing. Coming from NYC, this was an adjustment. But pretty quickly, I adapted to a lifestyle where I was waking up with the sun and spending spare time in nature, which was ultimately much more fulfilling.

Another challenge, which was more about the location, was that in the winter – and Taos has a heavy winter – we couldn’t drive up the crazy (4×4 only) road to the house. We had to hike a mile in. This meant planning ahead and stocking up before winter and then hiking in any extra supplies. It also just meant actually hiking up a mile in the snow to the house from the car. This was pretty intense at first, but after realizing there was no need to be rushing home, the walk became a meditation. Plus, it was insanely beautiful up there! Often I hiked in at night and when you don’t use a flashlight; you became intimately connected to the moon cycle and star systems.

On living the in city:

City life is also amazing. I had so much fun living in NYC and it’s really inspiring and motivating to be close to so many people doing awesome shit. It can also be chaotic and stressful and for me when I do live in the city I have to take time to get away and make sure I’m taking care of myself or I do too much and get sick.

I live in Topanga Canyon now and I love it because it doesn’t really feel like living in LA to me, it’s the perfect middle ground between city and mountain life.

How I stay connected to nature:

There a lot of different ways, but mostly I just need to take time to be still in nature. It’s often hard to feel justified in taking that time out, but it’s important to have that space to connect and recharge.

I moved to Taos sight unseen. I had no idea what to expect, but when I arrived I felt immediately connected to the land. And so many people there had a similar story; it was kind of a local joke – that “the mountain called them.” But it really felt like that! It was such a different experience for me, not only living off the grid but to live in a small town.

What I loved most about it was that it felt like an ambition-free zone, in the best way. No one asks you what you do and people work to live – not live to work. And for the most part, people really appreciated being there and loved their lives. That was really inspiring. Life was pretty simple, but not boring. Not that it was utopia, there were difficulties there too, but it was an amazing contrast to NYC. It was really hard for me to leave.

Favorite objects in my home:

My collection of National Geographic books and magazines, April Napier ceramic canisters, Wilderness Bodies crystal and concrete bookends, the Mothership bracelet my Mercado Sagrado partner Carly Jo (All for the Mountain) made.

Anastasia; The Ringing Cedars by Vladimir Megre; The Secret History, by Donna Tartt; Weird Scenes Inside the Canyon by Dave McGowan.

Love. Megaliths and geomancy. The Foxfire books. ’70s surf films. The Picnic at Hanging Rock. The Canyon and the women who live here.