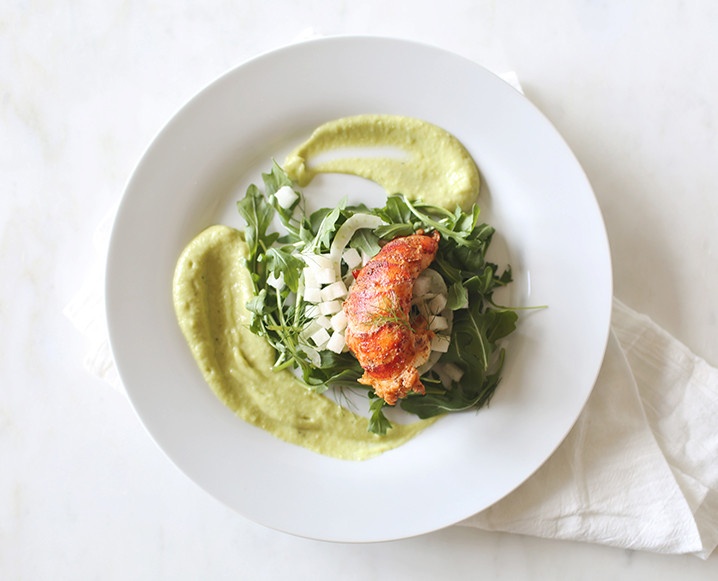 We’ve spent all month getting cozy with our March Guest Editor — wifey, mama and kitchen queen — Ayesha Curry, in her fave room of the house. We’ve rifled through her fridge, sifted through her cookbook shelf and dished on her weekend breakfast obsession. The only thing left to do is to peek through the pages of her own cookbook for a fresh recipe to put on rotation this spring.

Ayesha really delivered with this refreshing lobster salad from The Seasoned Life: light, easy and covered in avocado. Get the recipe here then enter win the entire book by hopping over to Instagram for a chance to win your own copy!

To make the dressing, combine all the ingredients in a blender and blend until smooth. Taste, seasoning with more salt and pepper if desired. Set aside. (This dressing is best served fresh, but in a pinch it can be stored in the refrigerator for up to 1 day.)

Place one lobster tail on a cutting board with the top hard shell facing up. Use kitchen shears to cut through the center of the first two segments of the shell. Turn the tail over and cut along one side of the bottom shell until you reach the bottom of the tail. Gently pry the shell open and pull out the tail meat. You may need to cut the very base of the tail meat to remove it from the bottom.

Using a knife, make a shallow cut downy eh back of the tail meat and remove the vein. Cut the tail crosswise into slices about 1/4 inch thick. Repeat with second lobster tail.

Melt the butter in a skillet over medium-high heat. Add the lobster, season with Old Bay, and sauté, tossing occasionally, until lightly golden, about 5 minutes. Do not overcook the lobster – take the pan off the heat when the lobster meat still looks just slightly undercooked, as the carryover heat in the pan will allow it to continue to cook. Taste, adding a bit more Old Bay if desired.

Cut out the core of the fennel bulb half. Using a sharp knife, cut the fennel into super thin slices. (if you happen to have a mandolin, use it instead for even thinner slices.)

In a bowl, toss together the fennel, pear, jicama, and arugula with a pinch of salt and a few generous spoonfuls of the dressing. Divid the salad among four plates and top with the lobster. Drizzle a little more dressing over the top. Garnish with the fennel fronds and serve immediately.