How To Put Together A Gorgeous Veggie Crudités Platter 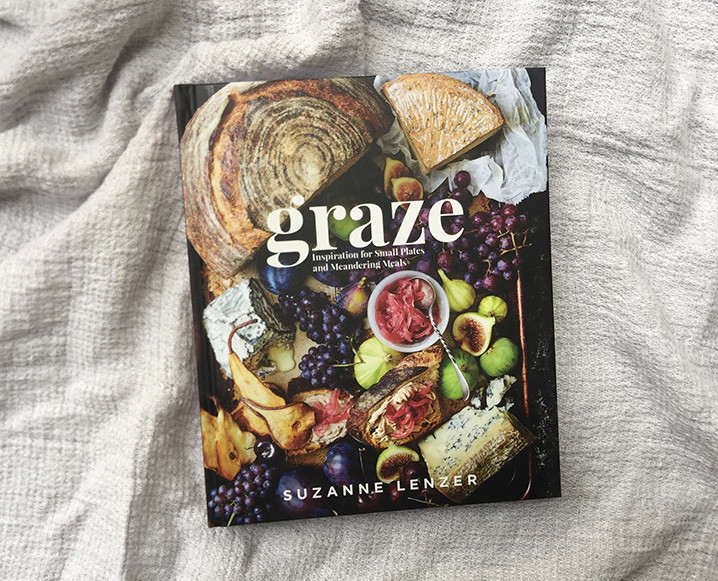 Bye, carrot sticks. The boring veggie plates of old are what gave plant-based eating such a bad rap in the first place. Seasoned food stylist and writer, Suzanne Lenzer, embraces the beauty of easy-yet-elevated plants in her stunning new cookbook, Graze: Inspiration for Small Plates and Meandering Meals.

We agree with Suzanne when she says that it’s not crudités themselves that make for boring party food, but how most people make them that is so underwhelming. Take a fresh look at the kind of modern, inventive crudités we’re seeing at the coolest hosts’ homes and our favorite restaurants. Take the author’s advice and make a crudité platter that can go head to head with even the most impressive cheese plate…

Crudités have never been my thing. It’s not because I don’t adore raw vegetables – it’s just the ubiquitous carrot sticks, broccoli florets and red pepper slices fall a bit flat next to a platter of unctuous cheeses or a dish of nectarous olives. I know people say they like crudités, but could it really be the creamy dip they adore, the hummus or guacamole, that keeps them reaching for another celery stick? I always figured that was the real attraction until it dawned on me that the raw vegetables I like the most aren’t commonly served as crudités. This hit me one night while I was cooking dinner, when Ken turned to me and said, “You’re eating all the sprouts.” He was right. We eat roasted Brussels sprouts like they’re going out of style in the winter, but while they’re sitting on the baking sheet, glistening with oil and sparkling with flaky salt awaiting their turn in the oven, I snack on them mercilessly. The oil and salt tenderize the papery outer leaves and soften their cruciferous bite, making them irresistible – the perfect raw vegetable for pre-meal munching. 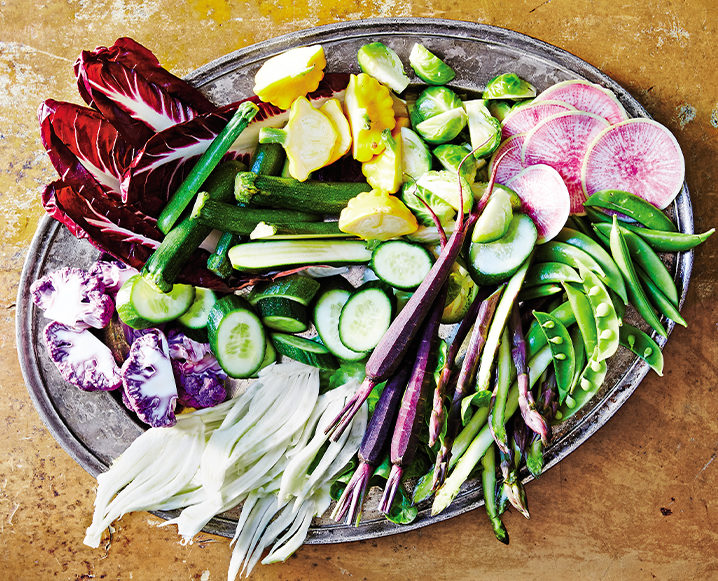 And there it was: With that subtle scolding, I had an epiphany. It wasn’t crudités I found lacking, but the array of crudités set before me. I love fennel slices so thin they flutter on your tongue, crisp sugar snap peas, and peppery radishes. Those young rainbow-colored carrots can work, or more mature ones turned into curls with the whip of a peeler. Even just tweaking the way vegetables are sliced makes a difference in how they appear on the plate, appeal to the senses and sit on the tongue, which is why for me, a few sprouts gleaming with oil or a cucumber curl win out over another grape tomato or celery stick any day.

An Unconventional Plate of Vegetables

Trim the Brussels sprouts and halve them. Toss them in a bowl with a nice coating of olive oil and use your hands to massage the oil into the sprouts. Sprinkle them with sea salt and set aside.

Meanwhile, use a vegetable peeler to slice the cucumbers lengthwise into long thin ribbons. Cut the asparagus spears in half lengthwise. Use a mandoline or sharp knife to shave the fennel into thin pieces, being sure to leave them slightly intact at the root end.

Peel and cut the rainbow radish into thin disks. Trim the breakfast radishes, leaving just an inch or so of green at the top. If you can only find red radishes, use the coarse side of a scrub sponge to scrub the radishes gently around their middles to reveal a bit of the white underneath.

Peel the carrots and trim the tops so that less than an inch of green remains. Snip the ends off the snap peas if they need it.

Place the lightly marinated Brussels sprouts and all the other cleaned and cut vegetables on a platter and cluster tightly together. Serve with a small bowl of olive oil and sea salt for dipping.