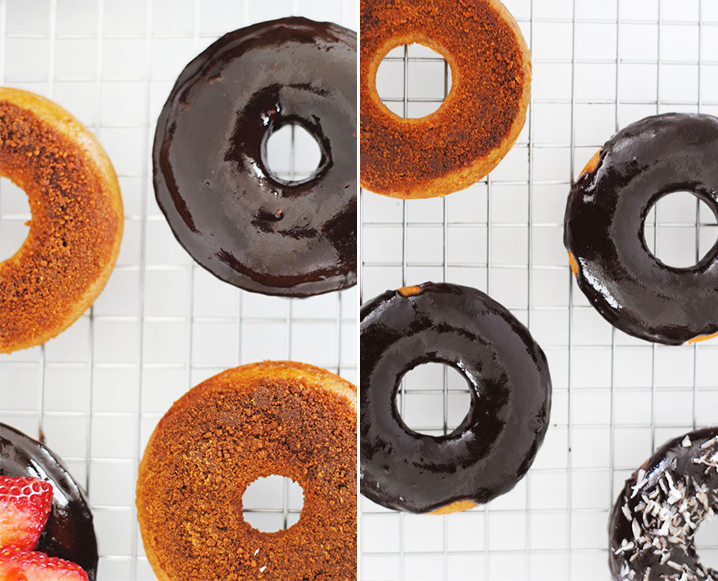 Welcome, weekend. The lovechild of two of our favorite secret guilty pleasures – bakery pastries and churros (secret’s out) – these gluten-free donuts from Purely Elizabeth‘s, Purely Magazine, have us salivating over our computer screens. We kind of can’t believe the ingredient list we’re seeing. Coconut oil? Applesauce? Ground flax? Maybe we’re getting ahead of ourselves, but these churro donuts seem more like breakfast fare then fairground food. Okay, maybe an indulgent breakfast, but still.  Disconnect the wifi and go home, everyone…this recipe wins the internet for today.

In a separate bowl, combine all wet ingredients. Add to dry ingredients and mix together to just combine – it shouldn’t be thick.

Use a melon baller or tablespoon to drop 2 ½ to 3 tablespoons of batter into each donut mold, spreading with the back to evenly distribute.

Bake for 8 minutes, rotate, and continue baking until the donuts are golden brown – about 7 minutes more. Ovens vary, so test with a toothpick after the initial 15 minutes. If it doesn’t come out clean, continue testing every 3-5 minutes. You don’t want them to be too firm, as they will continue firming up outside of the oven.

Remove from oven and let cool for at least 5 minutes before transferring to a cooling rack. Coat with your choice of toppings (I suggest dipping in melted coconut oil and sprinkling with cinnamon and sugar, or dipping in a chocolate glaze!*)

*Note: To make the chocolate glaze, combine ¼ cup coconut oil and ¾ cup vegan chocolate in a double boiler with a dash of cinnamon and sea salt. Let cool slightly before dipping donuts.